The ancient site on the south end of Nootka Island is seeing a surge of visitors this summer with three water taxi trips a day from Gold River. (Eric Plummer photos)

Situated on the southern edge of Nootka Island, life in Yuquot is quiet for most of the year, where only one household remains in the ancestral home of the Mowachaht. But this was hardly the case on July 20, when over 100 people converged as part of the Mowachaht/Muchalaht First Nation’s annual Summerfest gathering at the ancient site.

This activity was part of a wave of visitation this summer to Yuquot, which is also known as Friendly Cove. To amplify its attention to tourism the First Nation hired a full-time coordinator over the summer months to help arrange travel to the site, which is only accessible by float plane or a one-hour boat ride from Gold River. The tourism coordinator is handling bookings for the six rental cabins at Yuquot, collecting fees from hikers on the Nootka Trail along the west side of the island, and making reservations for a water taxi the Mowachaht/Muchalaht have recently invested in.

With seating capacity for a dozen passengers, the water taxi has been making three trips to the Nootka Island destination a day since early June, and this is expected to continue until late September.

“We have four skippers and four deckhands,” she said. “We also have contracts with various logging companies, fish farms or some of the local fishery resorts. They don’t necessarily want to use their boats to get their guests out to Yuquot, so they contract us to do that for them.”

Hunt mentioned a recent trip by 12 kayakers, who filled the water taxi - with their kayaks - to explore Nootka Island’s unique pebble shoreline.

“We bring them to the end of the Nootka Trail, we drop them off and bring their kayaks out to Yuquot,” she said. “They hike the trail, get in their kayaks and kayak around for a few days.”

The First Nation also has plans to develop a 45-site campground by the Gold River boat launch on ground where the community used to live before relocating to Tsaxana a quarter century ago.

“What the nation wanted to do is really create their own economy launching some businesses,” said Mowachaht/Muchalaht Administrator Kevin Kowalchuk. “One is the tourism, one is the water taxi as a start. Connecting Gold River with Yuquot was one of those key pieces to get guests out there.”

A total of 20 members of the First Nation are employed this summer to assist with tourism in the region. Interac and credit card payments are now possible in Yuquot, and six cabins available for rental have undergone upgrades, including being equipped with camping stoves, lanterns, pots and pans as well as mattresses.

All this activity takes place on an archaeological treasure trove, when digs have unearthed evidence of human habitation at the site for at least 4,300 years. Yuquot served as the summer home for the Mowachaht, who took to the surrounding oceans in search of whales to help sustain a complex community that would be the first Nuu-chah-nulth group to come into contact with Europeans when British explorer Captain James Cook landed at Yuquot in 1778.

As the Mowachaht/Muchalaht prepared for more visitors this year, community consultation revealed concern over how such an influx of tourism might affect the First Nation’s ancestral home, where only the Williams' household remains. Kowalchuk recalled a word expressed by Tyee Ha’wilth Michael Maquinna.

“The biggest concern that I heard is we need to keep the ‘ambiance’,” he said, adding that to minimize encroachments, future additions would not be larger than the existing cabins. “We’re not doing anything major until the community is fully supportive of what we’re doing.”

The Mowachaht/Muchalaht continued to live in Yuquot until the 1960s, when Canada’s Department of Indian Affairs relocated the community to a less isolated reserve by Gold River on the shore of Muchalaht Inlet. But this new home was in the armpit of a pulp mill, a location that proved to be bleak and frustrating for many of the First Nation’s members. On July 20 at the Yuquot church Maquinna spoke of this issue, and how life improved after the community moved in the early 1990s to its current home on the Tsaxana reserve north of Gold River.

“It helped me see the future,” said the hereditary chief of the move. “Things started changing for me when I moved up to Tsaxana. In Tsaxana there was no pulp mill across the street. There’s lots of greenery, lots of sky, fresh air, no noise.”

The early 1990s proved to be a seminal period for the First Nation, when historical difficulties met a surging desire for change and reconnection to ancestral culture. This was captured in The Washing of Tears, a documentary film about the Mowachaht/Muchalaht that celebrated its 25th anniversary by being available for anyone to see at NFB.ca (https://www.nfb.ca/film/washing-of-tears/).

After the community and their visitors gathered in the Yuquot church to see the film this summer, Maquinna reminded his people of the importance of their ancestral home.

“When we come to Yuquot, and go back to Tsaxana, I hope that our people keep the feeling of unity and strength that we get from Yuquot,” he said. “It originates from this place…it’s who we are and where we come from is Yuquot.” 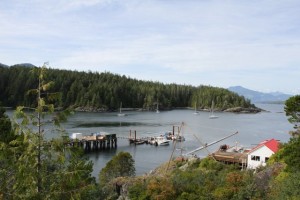 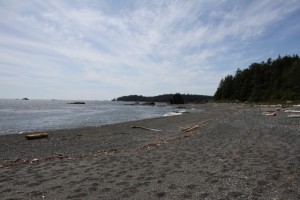 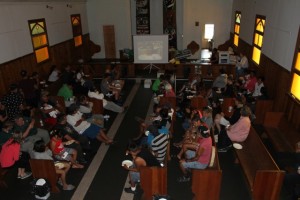