Huu-ay-aht member Edward Johnson participates in one of the regular tours of Kiix̣in. The village saw thousands of years of occupation and sustained attacks from neighbouring tribes. (Eric Plummer photos)

A century and a half after they were carved into a cedar tree, the knife marks are still visible at the end of a post that once supported a longhouse on the southern edge of Barkley Sound. The structure’s joint is still visible - although it’s gradually being overtaken by the tendrils of surrounding trees.

“The sapling tree will grow and grow and grow until it actually covers the whole thing,” explained Stella Peters as she gives a tour of the ancient Huu-ay-aht village of Kiix̣in, a settlement south of Bamfield that hasn’t been occupied since the 1880s.

It’s estimated that 300 people lived in there in in the 19th century, but unlike many of the other First Nations villages along Vancouver Island’s coast, people moved from Kiix̣in before modern life took hold. This left behind the longhouse beams, tools and middens to the hands of nature. Frozen in time, these clues to the Huu-ay-aht civilization’s past have survived as the trees, roots and moss gradually incorporate the remains into the forest’s unceasing state of growth.

“We still have a beam still standing; the only reason it’s standing is because of this tree behind you,” said Peters of one of the 10 homes that have been identified on the village site. “We’re one of the few First Nations that abandoned [its] village, so this village was pretty much preserved by nature, whereas other people continued to live in the villages. So they no longer had traditional homes, they had more modern homes.”

For this reason Kiix̣in is designated a National Historic Site of Canada. Parks Canada cites archaeological evidence of human occupation as far back as 1,000 BC.

“It is the only known First Nations village of the more than 100 villages on the southern British Columbia coast that still features significant, standing traditional architecture,” states Canada’s Historic Places register, which notes the abundance of fish, shellfish, and sea mammals at the site.  “As a strategically located village, Kiix?in was central to coastal transportation, trade routes and shifting alliances of the Huu-ay-aht from approximately 500 B.C.E. to the late 19th century. By the 1880s, the Nuu-chah-nulth had moved from the village, but the site has remained important in the lives of its members for food gathering as well as ceremonial and spiritual purposes.”

Kiix̣in has a unique geography, with bluffs steeply ascending from the beach in front of the village site. These formations served as a fortress for the community, which stationed watchers atop the bluff to oversee the surrounding shoreline for intruders.

“Over the centuries, this unique geography led to conflicts between the Huu-ay-aht and other First Nations who coveted the spot,” reads a section from Voices of the Elders, a book about Huu-ay-aht history and legends by Kathryn Bridge and Kevin Neary. “Many wars were fought and lives lots in its defence.”

A particularly devastating attack occurred approximately 300 years ago, when the Huu-ay-aht Tayii Haw̓ił ƛiisin narrowly escaped with some of this family. At the time ƛiisin was married to a Coast Salish woman from a tribe in Clallam Bay, located in the Olympic Peninsula of present-day Washington State. According to stories documented in 1922 from Huu-ay-aht elders Sa’sawatin, Yima’uk and Hyna’um, who lived in Kiix̣in as a young boy, the chief’s youngest son murdered his older brother. With the youngest son the next in line to inherit Huu-ay-aht’s most important title, this left other members of the tribe with a difficult decision.

“The young men therefore resolved that they had no choice: they would have to kill Nasismis to prevent future troubles,” reads the account in Voices of the Elders. “It was a dangerously bold move to kill a future chief. But in their view there was no alternative.”

With both of her sons murdered, the boys’ Clallam mother took this news to her tribe, who sought vengeance the following year as part of a 1,500-warrior raiding party comprised of tribes from the Nitinaht, Port Angeles and Lapush areas. Kiix̣in was burned, but ƛiisin and a few others escaped the attack by hiding in a cave, which was accessible by a hole in the floor of a lodge that was situated atop the bluff.

“Twenty of our people survived that particular attack,” said Huu-ay-aht Chief Councillor Robert Dennis Sr., who credits the family of Bill Frank with saving the hereditary chief. “He was the warrior for the nation, but he was also charged with protecting the chief. If there was an attack, he would be the one taking the chief. That’s why they survived when they attacked here. Their family took the chief to safety. It’s kind of very similar to how you see the Secret Service protecting the president.”

Nearly a generation later, ƛiisin and the surviving members of his tribe retook Kiix̣in from intruders. Building at the site continued, with the most recent structural logs dated from the 1880s.

“All of these posts and beams have different dates,” explained Peters. “The oldest one goes back to 1540.”

Over her years of giving tours of Kiix̣in, Peters came to identify her family’s longhouse on the village site, which was the home of the nation’s hereditary chief.

“We have genealogy for 11 generations here,” she said, standing where a roof once sheltered her family from the harsh elements of Barkley Sound.

Tours of Kiix̣in continue this summer into September, seven days a week, for visitors across the West Coast and around the world. 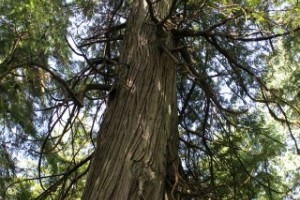 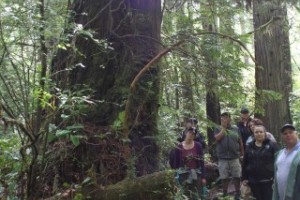 Visitors stand by a culturally modified tree cut by First Nations people hundreds of years ago. 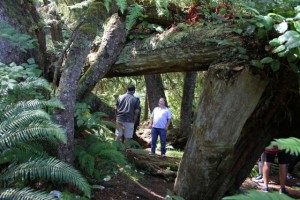 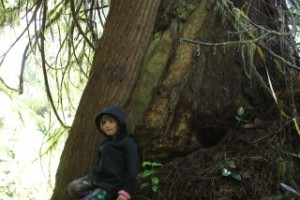 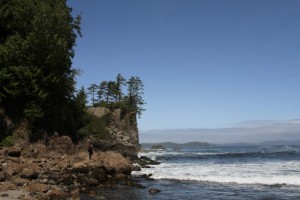 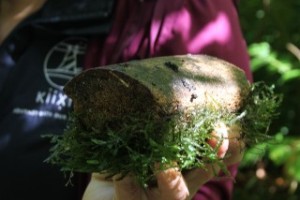 Stella Peters holds a shape carved from whale bone at the Kiixin village.