September is salmon smoking time along the Somass River

Linda Schulz-Pelech and her husband Don stand by a salmon smoker they built at their home by the Somass River. (Denise Titian photos)

Summer is over; the kids are back to school and the salmon are returning home to spawn. For many Nuu-chah-nulth-aht late summer means home-use fish deliveries from their respective First Nations.

If you’re fortunate enough to live in an area of Port Alberni that allows the use of smoke houses, this is the time of year to have your cedar and alder wood stocked and your knives sharpened for fresh incoming salmon.

Ha-Shilth-Sa was invited to the homes of Tseshaht members that were busy smoking salmon in early September.

Tseshaht elder Linda Thomas enjoys a stunning view overlooking the Somass River from her front room. From there you can see Tseshaht fishermen in their small, open boats heading down river to set their nets for an upcoming FSC (food, social, ceremonial) opening.

Her smokehouse is in the backyard. Stacks of firewood are nearby, waiting for the next batch of prepared salmon to be hung inside.

“I don’t use sticks anymore to hang salmon because I was losing too much,” said Thomas, adding that her fish would fall off the sticks and onto the floor. She uses metal racks to smoke her precious salmon.

Thomas demonstrated how she was taught to cut a spring salmon (chinook) for the smokehouse to Ha-Shilth-Sa. Armed with fileting knives and a handmade 7aplthay’ak (roughly pronounced ‘up thlaya’), Thomas quickly went to work breaking down the 20-plus-pound spring salmon, explaining each step very carefully.

The gutted and gilled salmon had been packed with ice for several hours. Thomas said allowing the salmon to chill on ice for a few hours - rather than cutting it up straight from the river - allows the flesh to become more firm, making for easier cutting.

The first step was to remove the head, complete with collar. It is important to make sure there is some meat left on the head so that there is something to eat. Placing the fish head with the lower jaw facing upward, Thomas sliced through the flesh next to the spine using her 7aplthay’ak. Slicing through everything but the skin allows the head to open up like a butterfly. A stick would be inserted through the eye sockets and the heads would be hung near the door of the smokehouse, where there is less smoke.

Going back to the body of the salmon, Thomas sliced through the skin alongside the spine. Using her 7aplthay’ak. With deft strokes of her knife she cut a fleshy filet of salmon off, leaving plenty of meat on the spine. It is important to make sure your knives are sharp and that you avoid sawing back and forth as much as possible so that you don’t make a mess of the filets.

Thomas sliced the white belly portion off of the side of salmon she had just removed. The belly part is fat and some people don’t eat it but, for others, it’s the best part. Thomas scored the belly meat. She explained that the belly strips will also go into the smoke house and slicing the flesh allows the smoke flavor to penetrate the meat.

Several long strips of flesh were sliced off of both the skin side of the salmon and the spine side. The process was repeated with the other half of the salmon. Fins were cut off.

“It’s important to use everything, let nothing go to waste,” she said. Besides the fleshy skins and thin filets (which are dried to make upskwee/jerky), Thomas smokes the heads, the fleshy pair of pelvic fins, and the spine/tail. Spines and tails are boiled after smoking and can be made into a broth. The other fins go into a pot to be cooked for the pets. Nothing goes to waste.

Thomas is grateful to her mother for teaching her how to preserve salmon and to her father for his teachings.

“Dad said we should always share, and not just the heads or spines,” she said.

Long after her parents’ passing, Thomas carries on with the teachings, bringing some of her smoked gold to an elder in the hospital.

After enjoying his gift of smoked salmon, the elder told Thomas a story of her parents from when they were young. It was a story that warmed her heart and one that she might never have heard if she hadn’t abided by her teachings.

Hesquiaht elder Jean Ignace lives next to the Somass River. She was busy checking her smoked salmon bellies with her granddaughter, Belinda Frank. Inside the dark smokehouse were cedar sticks draped with thin strips of salmon flesh and salmon bellies.

“I’m just going to make half-smoked salmon,” she tells Ha-Shilth-Sa, meaning that the salmon would not be completely dried but would have the delicious alder-smoked flavor. “This is my granddaughter’s fish.”

Ignace said she was expecting fish from her nation the following day and would start her smokehouse up again over the weekend.

Further up the river lives Linda Schulz-Pelech and her husband Don. The couple are do-it-youselfers living in a beautiful home that Don is building from scratch, mostly using materials found nearby. He uses YouTube videos for guidance.

So it is no surprise that his small smoke house is made of scavenged pallets.

“We’re going to move over to a bigger smokehouse soon,” he says, motioning to a small cedar shed that he says was once a chicken coop.

Pelech, a Métis man, says he is self-taught when it comes to smoking salmon. He’s been doing it for 30 years, experimenting with different methods.

“I grew up next to the river and we’d bring fish home,” he shared.

Pelech offered up some of his delicious smoked salmon jerky (upskwee). It is translucent, mildly flavored with maple syrup and salt and is gently smoked.

“I start off leaving the door to the smokehouse open then start slowly closing it after a day,” said Pelech.

Cleaning, cutting and preserving salmon is hard, time consuming work but at the end of the day, when you sit down to a steaming plate of smoked salmon and potatoes, you know that it was worth it.

For Pelech and others who employ traditional methods with their fish, cleaning, cutting and preserving salmon is hard, time consuming work. But at the end of the day, when you sit down to a steaming plate of smoked fish and potatoes, you know that it was worth it. 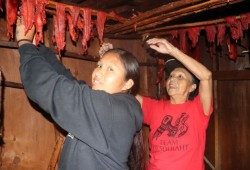 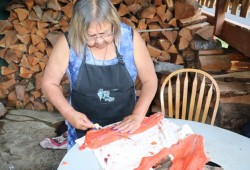 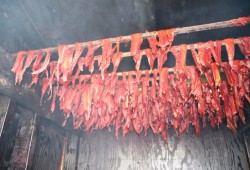 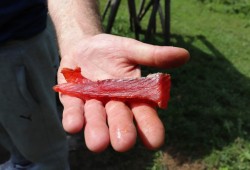 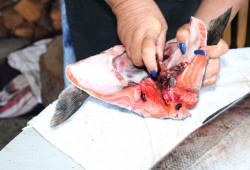