A whale in an advanced state of decomposition, missing its head, fins and outer skin, washed up Nootka Island's southern shore over the weekend. (Darrell Williams photo)

Darrell Williams, one of the half dozen residents of Yuquot, spotted the remains of whale that washed ashore on the long, exposed beach facing west at Yuquot.

The whale is in an advanced state of decomposition and is missing its head, fins and outer skin. It appears to be white, waxy blob.

He told Ha-Shilth-Sa that Cindy Johnson, another Mowachaht/Muchalaht member, spotted it just offshore in the swells over the weekend.

“I went to see where it ended up this morning; it is now below our welcome figure by the church,” said Williams.

He went on to say that he suspects it is the remains of a young humpback whale that has been dead for a long time.

Williams said that if the carcass stays where it is, they may harvest the bones after it fully decomposes.

Staff at the NTC fisheries department could not confirm that it is a humpback whale, based on the photographs. 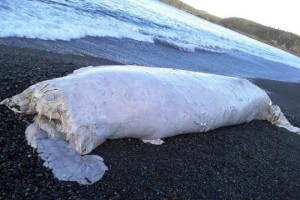