Tsimka Martin, a member of the Tla-o-qui-aht First Nation, is a co-owner of the successful T'ashii Paddle School. (Tsimka Martin photo)

A pair of Nuu-chah-nulth women are among those selected to receive a BC Indigenous Business Award this year.

Nene Kraneveldt, a member of the Hupacasath First Nation who owns Port Alberni-based Imagination FX, is the winner of the Business of the Year award in the one or two-person category.

And Tsimka Martin, who is from the Tla-o-qui-aht First Nation, is a co-owner of the T’ashii Paddle School. The business, which operates out of the Tla-o-qui-aht Tribal Parks near Tofino, took top honours in the Business of the Year category for those that have 3-10 people in their enterprise.

This marks the 11th year for the awards, organized by the BC Achievement Foundation. A total of 15 winners were selected this year in various categories.

All award recipients will be honored at a ceremony which will be held Oct. 17 at the Fairmont Hotel Vancouver. More than 600 people are expected to attend the ceremony.

Since the inception of the awards about 200 Indigenous businesses have been recognized for their efforts.

Kraneveldt, who been operating Imagination FX since 1999, said this is the first time her business, whose services include providing various photography and videography assistance, has been singled out for an accolade.

“I’ve never been nominated or pursued anything like this before,” she said.

Kraneveldt was nominated for her award by the Nuu-chah-nulth Economic Development Corporation. But since she prefers working in the background for others, Kraneveldt was hesitant whether to fill out the necessary paperwork required from BC Achievement Foundation officials to make her nomination complete.

Kraneveldt decided to move her nomination process forward after talking to her mother Sharon Van Volsen.

“I still listen to my mom sometimes,” she joked. “She’s a huge influence for me.”

Van Volsen urged her daughter to fill out forms needed to finish off her nomination.

“She reminded me of all the good things I’ve done and said I deserve this,” Kraneveldt said of her mother.

Though she has owned Imagination FX for the 20 years now, Kraneveldt said it has been in the past decade that she  focused full-time on this business. She brought in her husband Jim a year ago to help her with the business. He’s the company’s multimedia/safety specialist.

Kraneveldt said Imagination FX is rather successful even though she’s done little to promote it. Nevertheless, she manages to garner numerous clients across the country.

“We have had so much business without advertising,” she said, adding it wasn’t until 2016 that she first purchased some business cards. “We haven’t spent a lot on marketing.”

As for Martin, she’s been the co-owner of the T’ashii Paddle School since 2013. The business provides various canoe tours and standup paddle board lessons and tours.

“It’s certainly an honour to be getting this award,” said Martin, who is 35. “It’s recognizing that we have created a pretty interesting service that is required.”

Martin is also rather proud of the fact her business is able to utilize two canoes that her father Joe carved. To help handle the demand on the number of canoe tours, the business added a fiberglass canoe last year.

Martin is rather pleased with one aspect of the T’ashii Paddle School.

“What we pride ourselves on is the fact we are not using fossil fuels,” she said. “They do use some getting here because some (customers) come from a long way away. But once they’re here, we put them in a canoe and they use human power.”

Martin is currently one of four canoe tour guides with the business.

“I found it really holistic,” she said, adding the position of being a tour guide not only provides a tremendous amount of physical activity, but it also develops leadership skills.

Martin is also proud of the fact she’s been able to offer employment to other young Nuu-chah-nulth members. Her company has had nine Nuu-chah-nulth-aht work as tour guides in the past few years.

The T’ashii Paddle School had been nominated for its award by Tofino Mayor Josie Osborne.

Osborne praised Martin and her fellow co-owner Emre Bosut after it was announced the company had been chosen for a BC Indigenous Business Award.

“(They) have put so much passion and dedication in creating a business that employs and mentors youth, minimizes its impact on the natural environment, honours the teachers and mentors who helped them, opens the eyes of visitors from all corners of the world to the treasures of the Tla-o-qui-aht territory, and pursues excellence in everything they do,” Osborne said. 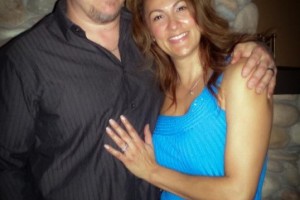 Nene Kraneveldt, pictured here with husband Jim, has owned Imagination FX, which has been selected for a BC Indigenous Business Award this year, since 1999. (Nene Kraneveldt photo)