A beautiful new Wellness Center is about to be built above one of Ahousaht’s stunning beach fronts, thanks to a generous contribution from an anonymous donor.

Ahousaht elder David Frank Sr. made it home to Ahousaht during the AGM to help with the ceremonial blessing of the land where construction will soon begin. Frank, on the mend from a debilitating stroke, was wheeled out to the rugged property which will be tucked in the forest behind Lot 363, Ahousaht’s newer subdivision. According to Julia Atleo, Ahousaht’s health services manager, it is hoped that once built, people from all over will come to find sobriety and well-being.

The blessing ceremony took place on Sept. 10 with Ahousaht leaders and contractors looking on.

Armed with conceptual drawings, Atleo presented images of a building that resembles a traditional longhouse, built in three conjoined segments. There is a main building that will house a meeting area and kitchen flanked on each side by dorm-like sleeping quarters.

Staff offices will be located in a separate building nearby. They anticipate about 12 employees will be hired to run the facility, which will require administration staff, counsellors, cooks and cleaners.

Once built, Atleo envisions a place where the Ahousaht Community Services team can host things like retreats and workshops.

“People have to do some prep work if they want to go to a treatment centre,” Atleo explained.

They are required to have several weeks of sobriety along with a set number of consecutive meetings with counselors. Atleo believes that Ahousaht will fill this gap with the services offered at their wellness centre.

Another gap in the local health care system is detox facilities. Atleo says this facility, with the assistance of a physician, could potentially take in clients in on an emergency basis such as in the case of detox.

Atleo says a local physician is willing to work with the staff to help them with detox work. Atleo and her team are working with the First Nations Health Authority on the project.

“We are happy to say that our work will focus heavily on the cultural component,” she told Ha-Shilth-Sa.

Elected Chief Greg Louie said the new facility will be used to better the future of Ahousaht’s youth through addictions counselling, workshops and healing services which will all be based in cultural wellness teachings.

“I am excited, happy that this is happening,” said Louie.

The work being done at the new wellness center is similar to that of Ahousaht’s holistic center called Cha-Chum-Hi-Yup Tiichmis, and the two centres will share staff.

“The focus will be on addictions; there will be retreats with a cultural focus,” Louie said.

The contractors hired to build the facility will soon hold a job fair to fill positions they have in trades and labourers. Elected Councillor Crystal Sam said the contractor has promised to hire two Ahousaht members for every worker he brings in. Construction is scheduled for completion in spring 2020.

In addition to the Wellness Centre, construction is underway on a $180,000 emergency shelter in Ahousaht. According to Louie, the house, which is now in lock-up stage, will be used for those in need of emergency accommodations, such as persons escaping family violence.

The house, located at Lot 363 at the south end of Ahousaht, will be managed under the umbrella of Community Health Services, led by Julia Atleo.

Chief Louie said the house is intended to help children first, so that they can stay in the community in an emergency situation. It will also be available to both men and women escaping violence. The focus, he said, is family safety. 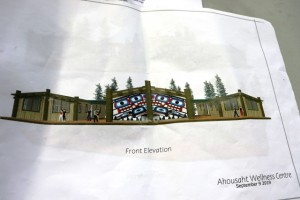