This 30-foot Cutwater cruiser and trailer was seized by police in Gold River this month. If convicted, violators may lose their boat and gear in addition to facing substantial fines (RCMP photo).

A group of recreational anglers was headed east on Hwy. 28 last week with a boatload of chinook when their summer fishing expedition on the Island’s west coast took an abrupt turn.

The three, described only as non-B.C. residents, are scheduled to appear in court in Gold River on Nov. 22 after their boat, trailer, catch and gear were seized by Nootka Sound RCMP and DFO as they headed out of town.

Acting on a tip and in co-ordination with DFO conservation and protection officers, police seized 26 chinook salmon, 24 kilograms of salmon roe, 18 rock fish filets and eight ling cod filets, evidence suggesting a callous disregard for catch restrictions. The recreational limit for chinook in the sound is two fish per day or one fish outside of the sound.

Considered exceptional for the size of the seizure, the case drew widespread media attention after RCMP issued a news release last week.

“These types of blatant violations and disrespect for conservation efforts affect all persons around Nootka Sound and Vancouver Island,” said RCMP Sgt. Josh Wiese, Nootka Sound detachment commander. “We want to send a strong message that these behaviours get recognized and actions have consequences.”

The courts have a wide latitude of penalties they can assign for contravention of B.C. sport fishing regulations, including $1,000 for each offence, confiscation of gear and vessel, fishing prohibitions or penalties as high as $100,000 for a first offence.
Wiese said the case has been handed over to DFO due to its complexity.

“This was a very, very blatant case,” he noted. “Whether it’s common or not, I don’t know.

While Wiese has seen nothing else like it, he’s only worked on the coast for a year.

DFO and RCMP have been doing a lot more patrols in Nootka Sound, though police are not focused on fisheries enforcement.

While engaged, they ask people to pull their lines and show what they’ve got in their holds. The Fisheries Act is broad enough to allow ample powers of inspection, Wiese noted. They also patrol for criminal activity, specifically smuggling, while fisheries enforcement is secondary.

“It’s a very porous coast … we have a lot of eyes on the water but not enough to watch the whole coast,” he said.

RCMP have been also focused on preventing conflicts on the water after tensions arose in August 2018 between T’aaq-wiihak fishers and recreational boaters. Those conflicts were attributed to frustration over poor catches last summer. This summer, fishing on the sound has been outstanding by some accounts. Together with heightened restrictions on chinook elsewhere along the coast, that has attracted more visitors.

Chinook salmon populations along the south coast are in a critical state of decline, which led DFO to impose severe catch restrictions this season. First Nations and recreational fishing opened on the west coast in mid-July while the commercial season remained closed until August. The severity of new conservation measures has been hard on people who rely on the fishery for food and income.

Kadin Snook, the Mowachaht/Muchalaht First Nation’s fisheries co-ordinator, said he noticed the seized vessel on the water since July and suspects the catch represents only the tip of the iceberg in term of overall activity. He’s also seen an increased enforcement presence on the water.

“It’s quite positive that DFO responded to the formal complaint and I think it’s great,” he said.

There will be a follow-up meeting with RCMP on the matter, he added. He was surprised that the seizure included 10 bags of salmon roe. He would also like to know if it’s possible to determine the origins of the seized fish.

“The heads were removed, unfortunately.”

In recent years, the same boat has been returning each summer to Yuquot (Friendly Cove), said Ray Williams, who resides there with his family, the only residents. He knows the three men, all American, by their first names.

“In Mowachaht territory,” Williams mused. “I wonder what he was thinking?”

Wiese said the anglers charged were described as non-B.C. residents to indicate they are not from the local area. He would not comment on why their place of origin was withheld.

The RCMP officer wasn’t surprised the matter has drawn interest in Nuu-chah-nulth communities.

“It’s of interest to NTC,” said Wiese, who alerted MMFN when the seizure took place. “This is their resource and we have an obligation to help protect and manage it.”

Anyone with information on this or any other illegal fishing activity can contact DFO’s Observe Record Report line at 1-800-465-4336 or Nootka Sound RCMP at 250-283-2227. As of this summer, the public can also use a new email address that goes straight to fishery officers: DFO.ORR-ONS.MPO@dfo-mpo.gc.ca. 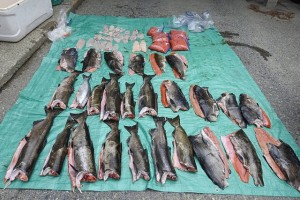 The catch seized in Gold River on Sept. 11 included 26 chinook. The recreational limit is one or two per day per angler (RCMP).