Capt. Ben Hughes of ther Victoria Airport Fire Department stands with other Tour de Rock riders on Sept. 27 at the Alberni Athletic Hall, after being blanketed at the event. (Eric Plummer photos)

Police and other emergency service providers made what has become their annual stop in Port Alberni on Friday, Sept. 27 during the Cops for Cancer Tour de Rock bike ride.

The 1,100-kilometre trek across Vancouver Island to raise funds for childhood cancer treatment has stopped in Port Alberni in recent years, with a fundraising dinner held in the honour of the police officers, firefighters and other emergency service providers who participate in the two-week ride. This year an event was held at the Alberni Athletic Hall, concluding with the riders being blanketed and treated to a song by Tseshaht member Aaron Watts. Organizer Matilda Atleo was also blanketed for her efforts in coordinating the extensive meal, which included turkey, ham, halibut and salmon.

On the following day the riders hit Highway 4, bound for communities on Vancouver Island’s west coast. 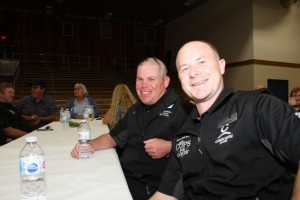 Const. Mitch Gordon (left) of the Nanaimo RCMP and Const. Mark Hendren of the Saanich Police Department await their meal at the Tour de Rock dinner. 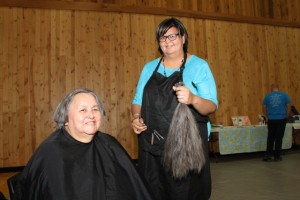 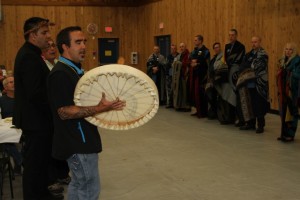