Know where you come from: Nuu-chah-nulth members recognized for commitment to their nations

Holding back tears, Wally Samuel clutched by wife Donna tight as he stood in the warmth of applause. A few days before his recognition at the Nuu-chah-nulth Tribal Council’s annual general meeting on Sept. 25 Samuel had received a cancer diagnosis, news from the doctor Samuel admitted he was still digesting while at the event in Victoria.

“He told me I have a tumor in my intestine, it’s cancerous,” said the Ahousaht elder, as he was wrapped in a blanket by members of his nation. “They’re working on it. Hopefully they caught it on time.”

For decades Samuel has been an advocate for fellow Ahousaht members, particularly those living off reserve in Port Alberni. He has been involved with the city’s friendship centre in various capacities since 1980, often encouraging participation in sports or assisting Nuu-chah-nulth seniors find the best health care.

“There has been a great group of kids who have been raised under Wally’s mentorship,” said Ahousaht Councillor Curtis Dick.

As he spoke to the crowd Samuel addressed the prevalence of homelessness, which was a focus during the AGM hosted by Ahousaht in Victoria.

“We’re starting an Ahousaht housing society in Port Alberni,” announced Samuel, noting that the City of Port Alberni, as well as the local Tseshaht and Hupacasath First Nations, have been consulted on the initiative. “In the city it’s sort of underground. The kids, the young people especially, are wandering around, they don’t really have a home, but they do have relatives and friends they couch surf with. They have a difficult time because they have to find a place to rent. Because they are usually low on the totem pole with landlords, it’s hard for them to find accommodation a real decent home.”

Another Nuu-chah-nulth member was recognized at the AGM for her a long legacy of helping off-reserve First Nations in an urban environment. Marjorie White of the Huu-ay-aht First Nations co-founded the Vancouver Indian Centre Society in the early 1960s, a supportive facility which became B.C.’s first friendship centre. She also helped start the Circle of Eagles in 1970, a culturally sensitive halfway house in Vancouver for inmates transitioning into mainstream society. Her extensive volunteer work has encompassed the Lu’ma Native Housing in Vancouver, the Lu’ma Medical Centre, and the Aboriginal Patients’ Lodge.

Although she has been entered into the Order of British Columbia and the Order of Canada, the recognition before her fellow Huu-ay-aht members brought a special feeling.

“I think the greatest award is to be recognized by your own people,” said White. “I’ve used what I’ve heard on the outside to bring into the inside to help my nation in whatever way I can.”

“Probably when she’s leaving this world, she’s going to be helping somebody just before she goes,” said Huu-ay-aht Chief Councillor Robert Dennis Sr.

“I have spent all of my adult life in Vancouver, but I’m never far from home,” added White. “I know who I am, I know where I come from and I know who my relatives are.”

“Every time we go to Seattle, we call her,” said NTC President Judith Sayers.

This has been particularly beneficial for Teechuktl Mental Health, which sends a group of staff south of the border each December to host cultural activities in Seattle.

“You were always generous,” said Michael McCarthy, Teechuktl’s central region coordinator, to Williams. “Your food was always medicine for our people. Your food pulled all of us together.”

“I’ve really enjoyed catering for you all when you come to Seattle,” said Williams. “I really love having my people come over to sing and dance and teach.”

Dr. Sayers was also recognized at the AGM for her leadership in advancing Nuu-chah-nulth interests, particularly with respect to environmentally sustainable developments.  During her 14-year term as elected chief of the Hupacasath First Nation, Sayers led the development of a 6.5 megawatt run-of-river hydro station at China Creek - a partnership with the Hupacasath, Synex Energy Resources, the Ucluelet First Nation and the City of Port Alberni. She has also served on the Aboriginal Economic Development Board and was the political executive for the First Nations Summit. She is an adjunct professor at the University of Victoria’s Peter Gustavson School of Business and the School of Environmental Studies, and has worked as a strategic advisor to First Nations and corporations with Clean Energy BC.

“I’m really humbled to stand before you today,” said Sayers. “I’m always so thrilled to be part of the Nuu-chah-nulth team.”

Other recognitions were accepted on behalf of Nuu-chah-nulth-aht not present at the AGM, including Ahousaht member Joseph George.

“Joseph has helped many families with baby naming, coming of age ceremonies, traditional weddings, prayers, sending their loved ones on their final journey home, cleansings, potlatches, dance practice and supporting the preschool with the cultural aspect,” read Ahousaht Councillor Crystal Sam. “Joseph is an individual who is rich with knowledge, history and strong voice.”

Ahousaht member Jean Thomas was recognized for her dedication in searching for her son Travis. Travis Thomas has been missing since Aug. 7, 2018, when he was staying on the remote Bartlett Island as part of an addictions treatment practice. Jean and her family have regularly searched the Island since.

Susan Lauder was not able to attend the event, as she was busy teaching Grade 5 students in the traditional Nuu-chah-nulth uses of plants band trees.

“She has been very instrumental in our community for dance and song,” said fellow Hupacasath member Jim Tatoosh, adding that Lauder learned great deal of traditional practices from her mother. “Susan also learned how to sew traditional regalia, smoke fish, prepare and preserve salmon for the winter.” 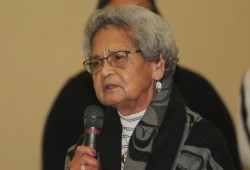 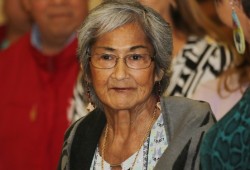 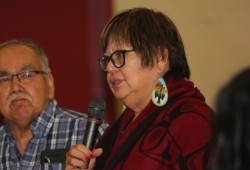