Lewis and Cathy George had no competition when they first opened the House of Himwitsa Native Art Gallery in Tofino in 1991. Other than Roy Henry Vickers, Lewis, who is Tyee Ha’wilth of Ahousaht, says that they were the only business selling First Nations art within the tiny coastal town.

This meant they didn’t need to focus on marketing or promotion. Instead, they poured their energy into finding and showcasing First Nations art from across the province.

Tofino has grown since then, evolving into a tourist town that brings in over one million visitors annually. And with this influx of visitors, new businesses have flooded in as well.

“Everybody has started selling First Nations artwork in their little tiny galleries,” Lewis says. “It’s digging into what we used to have before.”

Earlier this month, a Memorandum of Understanding was signed between Indigenous Tourism BC and Tourism Vancouver Island. Designed to increase Indigenous tourism across Vancouver Island, the partnership is aimed at businesses like the George’s, providing them with skills and resources, like social media training, that will allow them to stand apart in the authentic cultural experiences they offer as a First Nations owned-and-operated business.

Paula Amos is the Chief Marketing and Development Officer with Indigenous Tourism BC and says that their latest audit reveals that one in three visitors are seeking an Indigenous experience while they’re traveling in British Columbia. In 2018, this growth generated $705 million in direct gross domestic output and created over 7,400 full-time jobs, she says.

With over 50 nations on Vancouver Island alone, Amos says that part of the MOU will help to facilitate a deeper understanding of the diversity of the nations on the island.

“A big part of the Indigenous tourism overall is to educate visitors about the history of First Nations people,” she says.

Lewis hopes this will help with the “serious lack of cultural understanding about First Nations people in Tofino,” he says.

He can recall one morning in the summer when his nephew was on the dock waiting for a boat and started singing a traditional song. Tourists who were staying in the House of Himwitsa’s lodge began asking what the significance of the song was and whether something sacred had occurred.

“It wasn’t anything sacred,” he says. “It was a happy song that he was singing.”

It’s important for First Nations businesses to help bridge that gap and educate people, stresses Lewis, adding that “a lot of people don’t know that First Nations went to residential school and the hurts that went with that.” 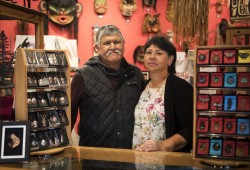 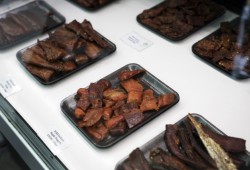