Ivan Clarke moved to what is now known as Hot Springs Cove in 1933. Over the following decades he would witness significant chages to Nuu-chah-nulth settlements in the remote area. (Submitted photos)

Refuge Cove is a safe harbour located at about the midway point of the west coast of Vancouver Island. Renamed Hot Springs Cove in later years, it is part of the traditional territories of the Manhousaht, whose people amalgamated with their Ahousaht neighbors.

Their Tyee Ha’wilth, Luke Swan, lived there with some of his people until the mid-20th century and would have seen Ivan Clarke arriving at his pre-emption property to launch his new business in 1933. During the 1950s neighbors from the north, the Hesquiaht, built a settlement at the head of the cove.

Businessman Ivan Clarke was there with his family for more than 30 years and saw many changes in the cove. His grandson, Michael Kaehn, spent 40 years researching this history. He wrote a book that came out this year, The Hot Springs Cove Story.

Kaehn’s book chronicles the history of the cove and tells his grandfather’s life story, beginning with his birth in 1903 at Victoria, BC.

Kaehn’s grandfather Ivan Clarke was well-known in Clayoquot Sound, having moved to Hot Springs Cove to open a store and to raise his family. He was a jack-of-all-trades who managed to build a multi-faceted business in one of the most isolated places on the island.

Clarke saw opportunity when he sheltered in the Cove during a storm with dozens of other boats. There were no general stores in the area to serve the stranded mariners and the Nuu-chah-nulth families living there. In 1933, he arrived at the cove by boat with two dogs, a canvas tent and some merchandise to sell. Within 24 hours he lost a dog to a cougar but managed to sell half his stock.

Over the next 30 or so years he built a sprawling business, including a little community at the start of the present-day trail to the world-famous Hot Springs. Using salvaged materials and what he could take from the forest, several buildings went up including a general store, a family home, and even a school house and a pair of water towers.

He made many friends over the years. Bert Clayton, George Sye, brothers Fred and Andreas Thornberg, George Rae-Arthur and Chief Ben Andrews, to name a few. Kaehn tells how these people helped one another survive and thrive in an isolated world of their own.

Clarke and his wife Mabel raised several children in the cove and together with the Rae-Arthur children, qualified for government funding to start a school.

But as time passed the children grew up and Mabel passed away. Their son Hugh married Maggie Campbell and began his own general store in Ahousaht. Back in Hot Springs Cove, an aging Ivan donated a large portion of his property to the province of British Columbia to eventually become part of Maquinna Marine Provincial Park.

While his buildings are all gone, there is a cairn at the head of the trail to the Hot Springs. It stands near where the Clarke family buildings stood. On the cairn is a bronze plaque that reads, “The Province of British Columbia, Maquinna Provincial Park, Established January 7, 1955. The land originally comprising the park was donated to the people of British Columbia through the generosity of Ivan H. Clarke a long time resident of Hot Springs Cove.”

Author Michael Kaehn is on a book signing tour, having already visited Ahousaht and Tofino; he will be in Port Alberni for two events. On Thursday, November 14, Kaehn will be signing books at the Alberni Valley Museum at 7 p.m. and again at Arrowvale Farm Store on the afternoon of Saturday, Nov. 16.

Published by Harbour Publishing, The Hot Springs Cove Story is a 200-page paperback complete with more than 50 photos, illustrations and maps. It is available online at the Harbour Publishing website for $24.95. 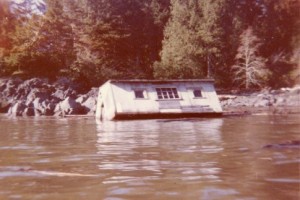 The house of the Amos family after the 1964 tsunami that destroyed most homes in the cove. 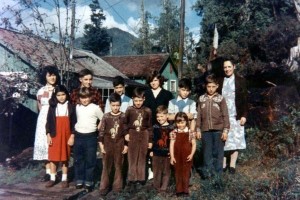 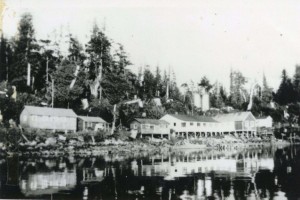