Christine Fred is a busy woman; she works a full-time job and helps out her family whenever she can. Still, she fills her spare time running a second-hand business with the proceeds going to two Port Alberni school food programs.

Why does she do it? Kids are going to school hungry.

“I want to help; we have to do something,” said Fred.

The idea for a second hand-store came to her during a trip to a well-known chain thrift store. The goods are all donated yet the prices are high, according to Fred.

“I’m sick of seeing (the stores) profiting off of donated goods and charging almost full retail – it’s ridiculous,” she said.

Fred said she developed a business plan in which she donated $200 worth of food to Eighth Avenue Learning Center and to Haahuupayuk Elementary School, owned and operated by Tseshaht First Nation. The donations represented 100 per cent of profits from her sales.

“I just wanted to show them that I could do it,” said Fred, adding that when she is up and running she will have overhead costs and the donations will be half of her profits.

Fred collects donations and has been offering them up for sale through occasional weekend yard sales or an online page she created. Her online sales page is on Facebook and is called Skookum Deals.

“The page is called Recycle Bin – I haven’t been able to change the name to Skookum Deals,” she added.

Visitors to the page will ask to buy items. They will meet Christine at a designated place and complete their transaction. Fred is also set up for e-transfers.

In recent months she purchased a double-wide trailer from a fellow Tseshaht member that she plans to run her second hand store from. She is working on cleaning up the trailer, which is located on reserve on Pacific Rim Highway, and there is a lot of work to do.

Fred chose the two schools as beneficiaries of her gifts for many reasons.

“I worked at Haahuupayuk for five years and I saw the teachers taking money out of their own pockets to feed the kids,” said Fred. In addition, she went to the school as a child and many of her family members attend school there.

She says Vast (Eighth Avenue Leaning Centre) is a good place. It is an alternative school that helps older teens in challenging situations complete their education.

“My sister graduated from there and so did lots of family,” she said.

David Maher, principal of Eighth Avenue Learning Centre, says Christine’s generous donations have had a huge impact on the kids at his school.

“Her generosity has had a positive impact on the kids in a number of ways,” he said.

The food she provides help young people work on living independently. Nutritious food allows them to come to class healthy and ready. Her donations are used to feed moms and babies, allowing them to be healthy.

“She has definitely enriched the lives of people of all walks of life,” said Maher.

Fred is always on the lookout for donations of small household goods. She can be contacted through her sales page, The Recycle Bin 2nd Hand Store on Facebook for purchases or donations. https://www.facebook.com/groups/590348761447328/

Watch the page for the grand opening of the store. 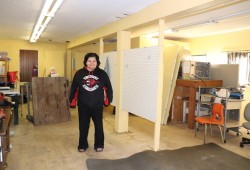