Southern resident killer whale J31 and her three-month old calf J56 near the Fraser River in August 2019. The calf was observed over two days carrying a fish in her mouth—although calves only drink milk during their first year of life. (Andrew Trites/UBC photo)

Scientists at the University of British Columbia (UBC) are using aerial drones to get a unique perspective into the underwater behaviour of northern and southern resident killer whales off the B.C. coast.

During phase one of a five-phase research project, the rare footage was filmed in collaboration with the Hakai Institute to help researchers determine if endangered southern residents are getting enough of their preferred prey, Chinook salmon, to meet their nutritional needs. The insights will inform conservation and recovery efforts for the population that has dwindled to under 75 individuals.

“Essentially we’re trying to determine whether there’s a shortage of food for southern resident killer whales in the Salish Sea and in order to answer those questions we’re conducting a comparative feeding ecology study on northern residents who are apparently in healthier conditions,” said Sarah Fortune, a postdoctoral fellow at the Marine Mammal Research Unit (MMRU). “We’re comparing [northern residents’] feeding behaviour and prey field with the southern residents, and so what this entails is a series of different technologies that are documenting the behaviours of the whales aerially and also underwater.”

The northern population has increased significantly since the 1970s, and is now estimated at more 300 individuals.

Fortune said in addition to a high-quality drone, researchers are also using a vessel equipped with multi-frequency echo sounders that are used to document at what depth salmon are found and in what numbers.

“Basically while we’re recording the behaviour of the [whales] we’re simultaneously recording the prey field and so we can overlay the two data sets and we can answer questions - like how successful at foraging are northern residents compared to southern residents,” Fortune said.

The team spent three weeks in late August and early September monitoring pods of northern and southern resident killer whales and their prey.

Fortune said scientists in Canada and the United States have used drones to capture footage of southern and northern resident killer whales in the past. But what is new about her team’s study is they’re using drones to video record the feeding behaviours of the whales, while simultaneously recording information about the depth of the fish in the water columns and the abundance of fish.

“The government has been taking precautionary action for southern residents and in order to ensure that the right measures, or the best measures are being implemented we need to be able to have data to support a particular factor,” Fortune said.

Late last year, federal Fisheries and Oceans managers suggested a closure to a large fishing area at the entrance to Barkley Sound in order to preserve prey for the endangered southern resident killer whale.

According to the DFO, the greatest threats to resident killer whales are reduction in prey availability, contaminants and acoustic and physical disturbance. Exposure to toxic spills, interactions with fisheries and aquaculture and climate change are other human-related threats that may negatively impact the southern resident killer whale population.

Many commercial and sport fishers on Vancouver Island were largely opposed to a closure, saying it would negatively affect their livelihood.

During Fortune and her team’s study, they also collected environmental data like water temperature and salinity and used hydrophones and traditional tagging methods to gather data on individual whales.

“A key part of this puzzle is figuring out where their prey is,” said Mei Sato, a research associate at MMRU in a press release. “We used hydro-acoustics to eavesdrop on the fish and gather information about the number and depth of Chinook salmon available to killer whales in the area.”

Over the coming months, the team will analyze their data and try to build a comprehensive picture of resident killer whale feeding behaviour.

The project is part of the federally-funded Whale Science for Tomorrow initiative, with additional funding and support from the Province of British Columbia, the Pacific Salmon Foundation, the Hakai Institute and Vancouver Whale Watch. 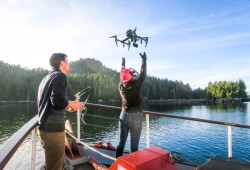 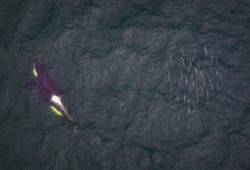