The latest fish-health challenge at Clayoquot Sound fish farms is another disturbance in already troubled waters for the aquaculture industry. (Mike Youds)

A battle with toxic algae blooms at four Clayoquot Sound fish farms has heightened concerns for wild salmon on the Island’s west coast while renewing demands for an end to open net pens.

Algae blooms occur naturally along the coast, caused by ocean upwelling that delivers rich nutrients to feed the aquatic flora. Harmful types of algae can play havoc in aquaculture where fish are contained and crowded together. Blooms occur more frequently in warm water conditions, but can happen any time of year, even in winter, according to DFO.

Cermaq staff detected the blooms Nov. 6 and notified DFO. Meanwhile, people in Tofino reported seeing bio-waste containers loaded onto a barge at night, an indication something was not right out on the water. The company later said it delayed collection of dead fish in order to reduce stress on surviving fish.

“The delay in mortality collection did result in the breakdown of the muscle tissue of the earlier fish mortalities,” said David Kiemele, Cermaq’s managing director. “When this occurs, you can see the protein breaking down and coming up as a surface sheen. This happened predominantly at our Binns Island site, which experienced the largest number of mortalities.”

By mid-month, Cermaq was reporting that elevated levels of algae were dissipating and all bio-waste had been removed. The company confirmed Nov. 29 that algae counts continue to decline in the region and feeding has resumed at its farms.

“DFO is satisfied that the facility operators are managing these fish health events appropriately,” a department communications advisor confirmed via email. Department staff visited some of the sites over the last week of November as part of DFO’s aquaculture audit and monitoring program, she noted.

Despite past experiences with the phenomenon, the blooms have increased concerns — particularly in nearby Nuu-chah-nulth communities — over possible impacts on wild salmon. The blooms are seen in the context of a succession of industry difficulties with sea lice infestations and infectious viruses, problems requiring a variety of chemical and mechanical treatments that have raised additional questions.

“Tla-o-qui-aht are concerned that the die-off in the local vicinity is an indication of a significant risk to wild salmon,” Chief Moses Martin said in a news release in late November. “Increasing risk is unacceptable as local salmon stocks are already stressed.”

“We can see that the marine risks of salmon farming are increasing, so the potential for negative impacts upon our wild fish is significant,” Dorward said.

Cermaq does not have Tla-o-qui-aht consent to transport product through their territory, they said.

“I was thankful,” said Chief Councillor Greg Louie. “It was good to hear face to face instead of hearing it on the news or from other second-hand sources.”

The company acted to counter what it contends was a wave of misinformation on social media.

News reports can sometimes “narrow their lens on everything,” Louie acknowledged. “I take everything with a grain of salt.”

“By our observations and monitoring, the situation is far from over,” said Bonny Glambeck of the local environmental group.

Glambeck has been travelling to the affected sites, observing and monitoring the company’s activities. DFO staff were to have been at the sites for the same reason in the last week of November, but Glambeck said she hasn’t seen them or the additional monitoring promised by the federal government earlier this year.

“I’m not seeing it in action,” Glambeck said. “This has been going on for three weeks and there’s nobody on the ground. This is a case of a major industry monitoring itself. This is a major, major die-off.”

MP Gord Johns is asking for an urgent meeting with newly appointed Minister of Fisheries and Oceans Bernadette Jordan. He intends to raise the issue of a “wild salmon emergency” when Parliament reconvenes. The aquaculture industry has been unable to resolve a host of issues, Johns said.

“They have lost the confidence of local people,” said Johns on Nov. 27, who was appointed the next day as NDP critic for fisheries, small business and tourism. “A majority of coastal people want to see a move to closed containment.”

The Liberal government made a campaign promise that the West Coast industry would transition to closed containment by 2025. That means, in view of the four-year salmon life cycle, that industry needs to begin transitioning within a year, Johns said.

Johns expects to see the fish farm transition explicitly spelled out in the minister’s mandate letter. He’s urging her to travel to the Island and hear directly from communities affected by the crisis.

“They haven’t got a grip on the issue,” he said. “We’re in the middle of a salmon emergency. There are historic low returns of fish, which we’ve never seen before,” he added, noting that fewer than 300 salmon returned to any Clayoquot tributary this fall. Some local chinook returns were in the double digits. “So we’re on the brink of collapse.”

A discussion about transitioning fish farms has begun, though.

Council and Cermaq management made a commitment at the meeting to improved communication through more direct contact and timely information, he added. 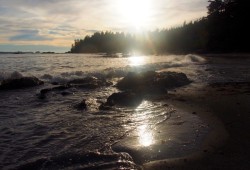 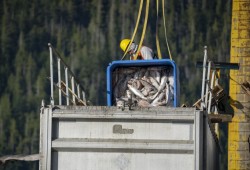