Fear of landslides at Kennedy Lake led a contractor to shut down Highway 4 for much of the day on Wednesday. (Josie Osborne/Twitter photo)

Continued downpour has prompted Environment Canada to issue a rainfall warning for the west coast of Vancouver Island, causing road flooding and a highway closure.

The warning was issued by Environment Canada early in the morning on Wednesday, Dec. 18, with total rainfall of 100-150 millimetres expected in some parts of the region.

“A strong Pacific frontal system over Vancouver Island is slowly moving southward today. This storm is bringing widespread heavy rainfall to the west coast of Vancouver Island,” stated the Dec. 18 warning. “For Tofino and communities further north such as Zeballos and Tahsis, heavy rain has been occurring for the past 24 hours. As the front begins to move southward early today, heavy rain will start to impact communities south of Tofino as well.”

After a few stormy days in Zeballos, the Ehattesaht First Nation reported calmer, overcast conditions with little rain. But further south on the coast the rains forced road closures, including on the well-travelled Highway 4, cutting off access to Tofino and Ucluelet until mid-afternoon. East of the boundary to the Pacific Rim National Park Reserve, a contractor working on widening the highway over Kennedy Lake closed the road to prevent landslides.

“With recent heavy rains, the contractor is proactively doing erosion control and rock scaling,” said the B.C. Ministry of Transportation and Infrastructure in an e-mail to Ha-Shilth-Sa. “There is no washout at that location. The ministry expects the highway to be re-opened mid-afternoon today.”

“Driving through [Highway 4’s] Hill project this morning was like driving up a creek bed under a fully running fire hose,” she posted. “Full of admiration for the crews and flaggers. Please be patient and take it easy, everyone.”

Multiple washouts were reported on the rugged logging road from Port Alberni to Anacla, according to nurses with the Nuu-chah-nulth Tribal Council who travelled there to attend to members of the Huu-ay-aht First Nations. On the way down the nurses reported seven washouts, the most they’ve encountered on the route to the remote community. The Huu-ay-aht First Nations’ government office in Anacla said that Western Forest Products was attending to flooded sections of the road.

“It was like a washboard,” said NTC nurse Sonia Somerville of the potholes covering Bamfield Main.

When the nurses arrived at the Huu-ay-aht government office they were advised to not stay long, as one of the culverts on the road could fail. Somerville recalls their truck being pulled while passing through some of the flooded sections.

“I don’t know if a car would have made it through,” she said.

Part of this road is shared by residents of Nitinaht Lake. By early afternoon on Wednesday rains had persisted in this area for 18 hours, leading the Ditidaht First Nation to monitor road conditions as members expected more severe flooding. If rains persist, the First Nation’s administration is preparing to advise members to not travel to Port Alberni, but take another road to Lake Cowichan for any essential services that are outside the community.

For an area that sometimes sees salmon pass over the road to Nitinaht Lake, flooding is an ongoing concern each year from October to March. Concerns heighten when rains persist for over 24 hours. 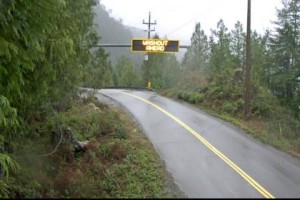 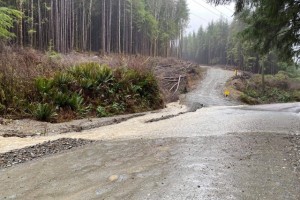 Flooding occurred on Bamfield Main on Dec. 18 between the 72 and 73 kilometre marks, close to Anacla. (Duane Nookemis Sr. photo)