Despite temperatures dipping to -6C, some in Port Alberni remain on the street. The the local shelter society has opened more overnight spaces during sub-zero temperatures in mid January. (Eric Plummer photo)

All of Canada is experiencing a cold snap now that we are in the middle of January 2020, and Port Alberni’s homeless people are feeling the bite of the bitter cold with a thin layer of snow covering the ground as temperatures going as low as -10C.

Ina Dick, receptionist at the NTC Teechuktl Mental Health building located at 3483 Third Avenue in Port Alberni, said that homeless or low-income people drop by the office regularly to enjoy a cup of coffee. As the temperatures dropped to below zero she said she’s been told by clientele that emergency beds have been opened up at the old Shelter Society building located on Eight Avenue and that a local church has opened its doors.

Wes Hewitt, administrator of the Port Alberni Shelter Society, confirmed that 12 additional extreme weather spaces were provided at the old Shelter building located at 3978 8th Avenue, but that they went unused on the evening of Jan. 13.

“We added an additional 12 beds bring us to 27 total extreme weather beds but the new ones were not used last night,” said Hewitt.

But Hewitt says there are an awful lot of service organizations including the Port Alberni Friendship Centre, Bread of Life, Salvation Army, ACAWS, churches, the Safe Injection Site and more that work together to deliver food and services to the marginalized people of the community.

“You know, I hear a lot about people saying that marginalized people are being bussed into Port Alberni – that’s just not true. The community is growing,” said Hewitt.

He went on to say that when they engage with the people they ask them how they came to be in Port Alberni. The truth is that they all have a connection to Port Alberni, whether it be family here or that they grew up here and came back.

“Nobody is bussing people here; they have ties here and they are part of our community,” said Hewitt.

The problem, he says, stems from the lack of affordable housing. The newly built shelter on 8th Avenue, across from the RCMP station is at 100 per cent capacity. Hewitt says plans are in the works to demolish the old shelter building across the street from the new one, creating more affordable housing units. In addition, the property next door to the new shelter site is going through the rezoning process so that more independent units for seniors can be built.

“Rainbow Gardens has built some new seniors’ units and have more construction on the go and this has helped alleviate the shortage of housing,” said Hewitt.

Ahousaht Chief Councillor Greg Louie said his nation has been concerned about homelessness for many years, going back to 2007 when former Ahousaht elected chief Curtis Dick led a grassroots donation drive, culminating in a Feed the People event at Victoria’s Our Place Society facility.

Donations were collected not only in Ahousaht but throughout Nuu-chah-nulth territories and along the way from Ahousaht to Victoria. Besides food, people donated warm clothing and toiletries.

The event was repeated twice more with an estimated 800 – 1,000 meals served at Our Place in Victoria, during the winter of 2012.

Chief Louie has been lobbying not only ministers in the provincial government but also Indigenous political leaders in an effort to find a solution to the growing problem of homelessness.

Last September Ahousaht met with the Assembly of First Nations national chief and learned that there is no mandate or strategy to address homelessness.

National Chief Perry Bellegarde was invited to the Nuu-chah-nulth Tribal Council AGM, which Ahousaht hosted in Victoria. The theme was homelessness. Bellegarde could not attend the AGM but Louie said there was a lot of good discussion over the course of the two-day meeting.

Fran Hunt-Jinnouchi heads up the Aboriginal Coalition to End Homelessness in Victoria and Ahousaht has appointed Guy Louie to the coalition as a representative.

“They have collected lots of information on homelessness in Victoria and also across Canada,” said Greg Louie.

He went on to say that they are doing good work and he hopes that there will be a ripple effect to end homelessness in places like Oppenheimer Park in Vancouver.

For example, Aboriginal people represent about two per cent of the population in Vancouver’s Downtown Eastside, but they comprise 39 per cent of the more than 2,000 homeless people counted in the area. The homeless numbers are similar in other urban centers of Victoria, Nanaimo and Port Alberni.

Hewitt says that plans are in the works to do a homeless count in Port Alberni in the spring.

“The current estimations of 300 are probably inaccurate,” said Hewitt.

He acknowledged that it is difficult to get an accurate count with people moving around.

“Lots of us get together to provide services to marginalized people and we do a pretty go job of it,” said Hewitt.

During the daytime hours homeless and low-income people visit a host of Port Alberni’s service organizations to get out of the cold and to enjoy a hot drink and maybe even a meal.

“During the day people are warm and being looked after, so you don’t see them in the doorways and on the streets,” he added.

Indigenous leaders have faced long-term housing shortages on reserve, causing members to leave the community as one contributing factor. The AFN plans to develop a national First Nations homelessness strategy that will require advocacy for multiple partners in order to acquire the resources required to improve housing and infrastructure.

Chief Louie and his council continues to press government agencies to bring services to the people.

“We do our best to take care of our own; we want to know where our people are and if they are doing okay,” he said, adding that the recent loss of someone in Victoria’s street community hit close to home, with the man being the father of young Ahousaht children. We will continue to advocate for our people; we are making connections with various ministries, seeking political commitments so we can help our people.” 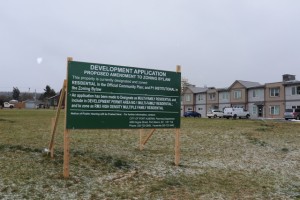 The Port Alberni Shelter Society, in partnership with BC Housing is preparing to build an independant living seniors facility on the property adjacent to the new Our Home on Eighth Avenue - a 30-unit supportive housing facility. (Denise Titian photo)