A report released today by the B.C. Human Rights Tribunal is citing widespread discrimination experienced by the Indigenous respondents surveyed – and little faith in the quasi-judicial body’s ability to protect against such abuse.

Input from 102 Indigenous B.C. residents informed Expanding our Vision, a 52-page report with widespread accounts of discrimination. The BC Human Rights Tribunal exists to review complaints under the province’s Human Rights Code, but the vast majority of respondents in the report did not submit complaints. Many didn’t know the tribunal is there to help, while others expressed no faith that the BCHRT would defend their rights.

Of the 25 who tried to file a complaint to the tribunal, the majority of these submissions didn’t proceed to consideration.

“Treaty rights are not upheld, Aboriginal rights are being infringed upon, the land question has not been resolved, yet the wheel keeps on turning and none of these laws are being followed by the provincial or federal government,” noted one respondent. “At the end of the day, would filing a complaint with BCHRT make a difference?”

Ardith Walpetko We’dalx Walkem, a lawyer who authored the report, observed that many respondents felt that discrimination is a way of life. Examples are not being served while shopping, being followed by security guards, difficulty finding landlords who would provide rentals and not being taken seriously by police or health care providers.

“For me it was heartbreaking the lack of hope that people have,” said Walkem. “We’re seeing this kind of micro-aggression, which reflects more of a systemic discrimination against Indigenous Peoples that happens unquestioned. Society in general isn’t seeing this as a problem, but this is a prevalent and pervasive area of discrimination that Indigenous people face.”

On the topic of being denied services, the case of Maxwell Johnson has sparked media attention recently, after the Heiltsuk Nation member and his granddaughter ran into trouble at a downtown Vancouver Bank of Montreal branch. On Dec. 20 Johnson came to open a checking account for the 12-year-old for a transfer of funds, but his identity was questioned by staff, which led to the two being arrested. Johnson has said that the employee might have feared fraud when $30,000 was in his account, the result of a federal Aboriginal rights settlement due to the past infringement of spawn-on-kelp harvesting in Heiltsuk territory.

Vancouver’s Office of the Police Complaint Commissioner has ordered an investigation into the arrest and detention of the two.

“The incidence of discrimination is pervasive in terms of service delivery or denial, what makes it a bit unusual is that it got to the level of arrest,” commented Walkem on the Bank of Montreal incident. “They handcuffed a child.”

Douglas White, chairperson of the BC First Nations Justice Council, believes that institutional changes are needed for society to better protect the rights of Aboriginal people.

“We are at a defining moment in our country’s history where we must collectively recreate the basic institutions of society to include Indigenous Peoples in an appropriate and just way,” he said in a BCHRT press release.

Walkem’s report lists a number of recommendations to improve how the tribunal can better serve B.C.’s First Nations, Métis and Inuit. These include recruiting more Indigenous staff, removing procedural barriers, addressing the shortage of complaints from Aboriginal people, forming a committee to implement the report’s recommendations and reporting on progress after six months.

Another recommendation in the report is to incorporate traditional Indigenous laws into the judicial process. Walkem notes that this could come from an individual’s home nation and territory.

“Are there Indigenous ways of peacemaking that might be used which could be specific to the territory or the people involved?” she asked. “That might help people to feel more heard and feel more satisfied with the outcome.”

The report cited that the BCHRT is seen as an “urban entity” disconnected from the small, remote communities where many of the province’s Indigenous population continues to live. Those tied to Aboriginal communities will likely hope the report’s recommendations can lead to better access to justice, as the number of Indigenous people incarcerated continues to trend upward. From 2006 to 2016, the number of Indigenous people in federal custody increased by 49 per cent to 3,760 individuals, according to Statistics Canada. This means that one quarter of those in federal custody are Aboriginal, a rate eight times that of Canada’s non-Indigenous population.

Walkem believes that the unconscious perception many people have of Indigenous people is a factor.

“Society has a bias in the way it sees Indigenous people. It’s more likely to see Indigenous people as threatening, as dangerous,” she said. “If we don’t know that we’re thinking these people are dangerous, then we’re going to make decisions that reflect that.” 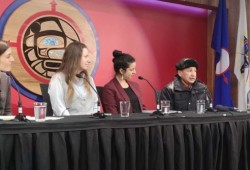