A contractor has begun blasting debris at Big Bar Slide on the Fraser River north of Lillooet. This photo was taken during initial response measures (Province of B.C. photo).

As part of a team that responded to the Big Bar Slide emergency last summer, Gord Sterritt saw its profound impact on fish and people.

There were the thousands of Pacific salmon, trapped below a five-metre “velocity barrier,” and there were the responders, who watched them struggle, knowing the gravity of the situation.

“It was definitely stressful for the fish,” said Sterritt, executive director of the Upper Fraser Fisheries Conservation Alliance. “It was like a grinder. They were using all their energy reserves. It was also an emotional time for the people working on it.”

Last spring, a 125-metre bluff above the river north of Lillooet gave way and sent 750,000 cubic metres of rock into the gorge below, blocking the most critical salmon passage in B.C.

Six months later, the long-term impact on Pacific salmon remains clouded, much like the muddy Fraser itself. Sterritt, however, is optimistic about remediation efforts, which started in early January to clear a passage for the 2020 migration.
Federal Fisheries Minister Bernadette Jordan visited the site in mid-January as Peter Kiewit Sons ULC went to work on a $17.6-million contract for rock removal. She tried to reassure worried stakeholders that DFO has the matter in hand.

“We’re moving swiftly with the next phase of our response, in collaboration with First Nations, the province of B.C. and industry partners, and are hopeful this will lead to a lasting solution for safe fish passage,” Jordan said. “With the establishment of two new working groups, it’s all hands on deck.”

The groups will develop contingency and remediation plans while considering alternative fish passage methods and conservation-based stock enhancement. They need to look at options in case the height or water velocity prove to be too great for certain salmon populations early in the 2020 season.

Taking advantage of the seasonally low flow and working in hazardous terrain, the contractor will attempt to blast channel boulders, one the size of a bus, within a three-month time frame.

Tensions have eased since December, when B.C. First Nations called for governments to declare a wild salmon emergency. There is a sense of closer co-operation now, even if the crisis is unresolved.

“There have been lots of frustrating times but also a lot of accomplishments since the solid response began,” said Sterritt, a member of the Gitxsan Nation. “I’m pretty glad that that DFO and the minister continue to identify this as a priority. That’s an opportunity for First Nation stakeholders to hold their feet to the fire and make sure we get as close to remediation for fish passage as we can.”

“It’s really serious,” Dunlop said. “They’re going to do whatever they can, depending on the water. It depends on the stability and how much they have to move.”

Early Stuart run sockeye are likely to be most affected, but larger chinook are the least hindered due to their size, Dunlop said.

“I think they managed to get only 17 pairs of early Stuart sockeye into the hatchery system,” he said. “The rest perished.”
The immediate impact on 2019 Fraser basin spawners and 140 First Nations that rely upon them for food was catastrophic. Returns were already well below expectations. Of the five million sockeye forecast to return, barely 600,000 made it into the river. Of these fish, 245,000 fish were eventually able to swim past the slide and 30,000 were transported by truck and helicopter.

Ken Malloway, a member of the Tzeachten Nation of the Sto:lo people and chairman of the Lower Fraser Fisheries Alliance, was part of most incident response discussions.

“One of our concerns right off the bat was the Early Stuart sockeye,” Malloway said. “They’re just small little sockeye and not very strong.”

As an emergency measure, they wanted to beach-seine sockeye to preserve brood stock.

“DFO brushed us off. I said we need to be doing this. You’ve got to get busy and do this. Otherwise we’re in danger of losing them forever.”

They managed to get 80 pairs to Chilliwack River Hatchery. Of those, eggs from 17 females matured and hatched, a genetic sliver of survival from an escapement that numbered 27,000.

“They have to swim up the Chilko River, so their heart is twice as big as it should be, and we thought they would probably make it,” Malloway said.

Strict conservation measures had an immediate impact on Indigenous fisheries. Sto:Lo didn’t even fish for sockeye.
“It impacted our people and it also impacted people really heavily up in the Interior,” Malloway said. “The people up there went without. They basically had no fish.”

Malloway hauled 900 kilograms of salmon to Prince George for the Carrier Sekani nation, which occupies part of the vast upper Fraser watershed. They were planning their annual salmon ceremony without any fish to prepare. His help was bittersweet for one woman.

“She had tears in her eyes. She said, ‘These are probably the only salmon we’ll get this year. I don’t want my kids to think they can only get fish from a truck.’”

First Nations along the Island’s west coast are in the same boat. Their access to Fraser River bypass stocks was closed years ago by conservation restrictions. The last opening was in 2018 when there was a good return of Fraser sockeye. Ditidaht contracted a seiner, caught 1,800 kilograms and distributed them to its 750 members. Typically, some members troll off the north end of the Island as well.

“That was the first time in quite a few years,” said Darryl Tate, Ditidaht fisheries manager. “It had to be at least 15 to 20 years since we had access to the Fraser bypass stocks and were able to distribute to the whole membership.”

With those fish taking a hit from the slide, he expects they will not see another 2018 for quite a few years.

“We’ve already been diverting to other species,” Tate said. “We’ve got to adapt and change. Everybody needs to start looking to local stocks.”

Ditidaht fish local stocks of chinook and chum. To help rebuild those runs, they collect live brood stock for Nitinat River Hatchery, about six million eggs per year, and share them with Sooke Nation to boost production. The local chum return, however, was dismal last year with only 45,000 returning after 340,000 were forecast. That points to the broader threat of poor marine survival with a warmer ocean among prime suspects.

“That’s pretty scary,” Tate said of the chum showing. “Four years ago, we had one million. It’s like a total drop-off in four years.” 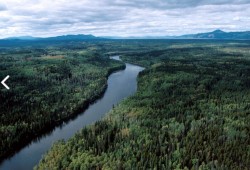