This bridge on the road to Bamfield was one of the many casualties from a weekend of relentless rain on Vancouver Island. Meteorologists are observing more intense storms, after the second wettest January on record. (Ken King photos)

The numbers are not yet in, but people are saying that more than 300 millimetres of rain fell in some areas of Vancouver Island over the weekend, making travel treacherous - and in some cases deadly.

Heavy rain on the west coast of Vancouver Island caused flooding, mudslides and even washed out a bridge cutting off access to Bamfield, Nitinaht Lake and Port Renfrew. Low-lying areas of Duncan B.C. in the Cowichan Valley flooded, causing the municipality to issue a State of Emergency.

According to Environment Canada Meteorologist Armel Castellan, readings for Kennedy Lake area showed that 36 millimetres fell in a one-hour period with a total of nearly 1,000 mm over the last week of January.

“The month as a whole was more active than usual, with storm after storm it was almost like a month-long event,” said Castellan. “We had five atmospheric rivers with subtropical origins – what we call pineapple express and the last one was the juiciest.”

Not only did the last storm bring in quantities of rain that made January 2020 the second wettest on record, it was also longer than usual.

“These types of storms generally last 12 to 18 hours; this one lasted about 40 hours,” said Castellan.

And the heavy downpour made travel on logging roads into the west coast communities dangerous.

Nuu-chah-nulth Tribal Council employee Sabrina Crowley arrived with her family to their Poett’s Nook cabin on the evening of Thursday, Jan. 29. It wasn’t long before heavy rains began washing roads out between Port Alberni, Bamfield and Nitinaht Lake.

Crowley told Ha-Shilth-Sa that she, her sons, aged four and two, and her husband had been stranded in Poett’s Nook all weekend. She said Spencer’s Bridge, about 15 kilometres out of Bamfield, is completely destroyed and there are a few areas where the road is washed out.

Despite being stranded, the family was comfortable and had enough food.

“I’ve been watching the Facebook group Bamfield Corkboard for updates,” Crowley said on Monday morning, Feb. 3, adding that the word is the road would be open by noon. In fact, Crowley sent a message at 11:20 a.m. Monday stating that the road is passable but travelers must use the ‘back roads’ called Flora Main and Central Main.

By Monday morning people were also finally able to get through the logging roads to Nitinaht Lake. Some used the Caycuse logging road while others went through Port Alberni. One traveler reported that the road was horrible but they made it through.

People using the Bamfield Corkboard page reported deep snow on Flora Main Monday morning. Western Forest Products posted on their WFP Road Information page that the road is now open for traffic with a marked detour from Camp “B” to Flora/Central to Bamfield. The detour will be in place all week.

Meanwhile, in the Cowichan Valley, roads along the estuary were under several feet of water on Saturday. On Feb. 1, as the heavy rain started falling, 28-year-old Ethan Sampson of Duncan was seen in the Cowichan River near Quamichan Road. He hasn’t been seen since. Volunteers continue to search the river; as of Monday, nothing has been found.

In Sooke, B.C., three men, all aged 20, left a house late Thursday night and hadn’t been heard from since. Volunteers searched a wide area around Sooke all weekend. On Sunday, Feb. 2, the truck they were in was found in the Sooke River. Shortly afterward, the bodies of two of the young men were found in the river. The search continues for the missing third man.

Castellan says this is not the last of the precipitation. More is coming on Tuesday, Feb. 4 in the form of snow. Beginning about 4 a.m. wet snow will start falling.

“There could be lots at times, with 5 – 20 cm expected in some places,” said Castellan, adding that Environment Canada has issued a special weather statement. “But later in the afternoon temperatures will rise and the snow will turn to rain in lower elevations.”

He added that the west coast of the island will see less snow.

While he said that it is hard to attribute events like this directly to climate change, one thing he can say is that meteorologists are seeing climate trends in weather patterns.

“We may be having the same number of storms but the intensity of each one is higher,” he said adding that summers are getting hotter, winters warmer and winds stronger. 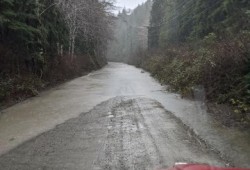