Ahousaht's girls and boys teams have advanced from the Island championship with second and third-place finishes this month. (Curt McLeod photos)

It’s already been a rather successful season for a pair of Maaqtusiis Secondary School basketball teams.

And it could get even better for both squads next week. That’s because both the Maaqtusiis senior girls’ and senior boys’ clubs have qualified for their respective A level provincial championships.

The girls’ team earned a berth into the B.C. tournament, set for March 4-7 in Kelowna, by placing second at its Vancouver Island championships. The girls’ Island tournament was held Feb. 21-22 in Duncan.

The Maaqtusiis side won three of its four outings at that event. The top two finishers qualified for the provincials in Kelowna.

Meanwhile, the Maaqtusiis boys’ team placed third at its Island tournament, which concluded on Saturday, Feb. 22 in Nanaimo.

But a tournament rule stipulated if the third-place finisher did not square off against the second-place team at the Island championships, then an ensuing challenge game could be staged.

That’s exactly what happened on Tuesday night, Feb. 25. The Maaqtusiis side hit the road and faced off against the host Duncan Christian team in the challenge match. Maaqtusiis eked out a 62-59 victory in that contest to earn a berth into its provincial A tournament, set for Mar. 4-7 in Langley.

Cedar Wechlin, the athletic director at Maaqtusiis Secondary School, is thrilled both clubs from its school - which only has about 70 students - have advanced to their provincial tournaments.

“This is huge for our community,” he said. “It gives our kids something to reach for. And it helps me as an athletic director to develop a better program.”

The Maaqtusiis boys’ team last qualified for the provincials back in 2009. And though he doesn’t have an exact year, Wechlin believes it was at some point in the 1990s that the Maaqtusiis girls’ squad last participated in its provincials.

Wechlin had spent a number of years serving as Maaqtusiis’ athletic director. But most recently he had been teaching in Fort Resolution, a hamlet in the Northwest Territories.

He returned to Ahousaht midway through the current school year.

“This was calling me back home,” he said of his Maaqtusiis post.

But just a few months ago Wechlin could not have envisioned that both Maaqtusiis teams would have successful seasons.

Besides sorting out the appropriate administrative paperwork and getting everything in order, Wechlin also utilized the school’s physical education classes to train players for the two teams.

Wechlin added he is envious when he sees championship banners at other schools. He’s told Maaqtusiis players his goal is to see similar banners in the school gym.

Both the Maaqtusiis girls’ and boys’ teams feature nine players this season. Though they are senior teams, the girls’ side not only features athletes in Grades 11-12 but also includes some individuals in Grades 9 and 10.

The team’s head coach is Amy Jack, who works as an education assistant at the school.

Meanwhile, the Maaqtusiis boys’ side includes players from Grades 10-12. A pair of community coaches, John Kennedy Frank and Floyd Campbell, are the bench bosses.

The Maaqtusiis girls’ side is led by a pair of Grade 11 players, Janae Sam and Sereana Kaloucokovale. The team has been seeded 14th at its 16-squad provincial tournament. It will face third-seeded Heritage Christian from Kelowna in its opening match on March 4.

Wechlin is anticipating the provincial boys’ schedule will be finalized by Thursday. Though he’s hoping for a Top 8 seeding for his squad, he admits he’s not quite sure exactly were organizers will eventually decide to rank the Maaqtusiis side.

The Maaqtusiis boys’ club is led by point guard Matty Frank, the only Grade 12 player on the team.

“He’s our only senior and our captain,” Wechlin said. “He definitely leads the team.”

Point guard Cha-asta Campbell, who is in Grade 11, is another leader for the squad.

Despite their third-place finish at the Island championships, Wechlin was pleased his club brought home some hardware. It was presented with a plaque for being the most sportsmanlike team at the tournament, as voted on by coaches and the officiating crews.

“That was huge for us,” Wechlin said of the sportsmanlike award.

Wechlin was also obviously pleased Maaqtusiis was able to win Tuesday’s challenge game and earn a spot into the provincials.

“We showed up,” he said. “Our boys came together and we took the win.”

Wechlin believes participating in the provincials will be an eye-opening experience for the Maaqtusiis clubs.

“I think they’re going to be blown away,” he said of the excitement and atmosphere that will be present at the B.C. events. “This is going to be like their NBA.” 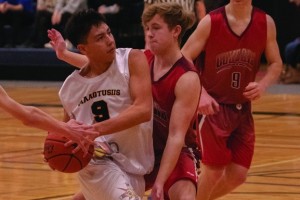 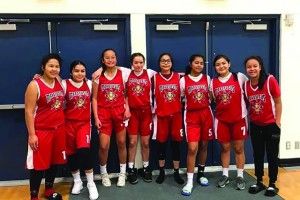