On March 3 at the University of Victoria members of the Ditidaht and Pacheedaht First Nations celebrated a cultural initiative that led to Pacheedaht first tribal canoe journey in 20 years. (Denise Titian photos)

A Ditidaht singer performs a Ci’qaa (prayer chant) in a gathering place on the grounds of the University of Victoria. His powerful prayer is followed by a paddle dance led by young members of the Pacheedaht Nation, who had just learned the dances within the past 12 months.

Their performance was part of an annual week-long event called Ideafest which is taking place at the University of Victoria in early March. The festival showcases more than 30 projects focused on research, art and innovation. One of the events this year was called The Land is our Classroom, which featured the work of Indigenous professors Sarah Wright Cardinal and Nick Claxton.

“Nick and I are new Indigenous professors in the School of Child and Youth Care,” said Sarah Wright Cardinal. “Our mandate is to teach courses and lead research projects that support the wellness of children, youth, families and communities.”

Both she and Claxton received one-year research grants in 2019, allowing them to engage with Indigenous communities in their respective projects.

Claxton works with local tribal schools in Coast Salish territory on the Living Lab project. Focused on eco-cultural restoration, his project brings together the Songhees, Esquimalt and WSANEC First Nations along with staff from the UVic faculty, local schools, NGOs and government.

Through his slide presentation Dr. Claxton showed that Indigenous children are learning about their ancestral homes and traditional food plants. They work together to remove invasive plants and they learn how to cultivate and grow native species.

Dr. Wright Cardinal also presented a slide show demonstrating how a small Nuu-chah-nulth nation worked together to breathe life back into a culture that has faded with time. Bringing knowledgeable people from neighboring communities to work with the Pacheedaht allowed for the transmission of cultural knowledge and language.

UVic alumnus and now a PFN councilor, Roxy Jones has been working for her nation to support cultural resurgence programs. Beginning in April 2019 PFN partnered with UVic on a six-month project that would culminate in the Pacheedaht youth taking part in Canoe Journey 2019 – Paddle to Lummi.

Having few resources, Pacheedaht haven’t participated in a canoe journey for more than 20 years.

With funding from the Government of Canada’s Social Sciences and Humanities Research Council, Wright Cardinal worked with Pacheedaht Health Director Roxy Jones to bring together the Pacheedaht community, their relatives and cultural teachers. Ditidaht members as well as people from UVic contributed to weekly classes that helped Pacheedaht youth reclaim their culture.

Under the tutelage of Ditidaht elders and knowledge keepers, Pacheedaht youth learned how to make the implements necessary to take part in a canoe journey. Together they made drums and paddles. The youth were taught proper cedar bark harvest methods, then learned how to weave the prepared bark into headbands.

From the same fund, the University of Victoria gifted a pair of canoes to Pacheedaht which were featured in the June 12, 2019 edition of Ha-Shilth-Sa, when the canoes were blessed

“A group from Ditidaht travels to Port Renfrew every Tuesday to hold language classes that are well attended by eager Pacheedaht learners,” said Wright Cardinal.

She went on to say that Ditidaht singers, language and culture holders Bobby Durocher, Cyril Edgar, Christine Edgar, Sarah Tom and the late Jimmy Chester all helped to pass the teachings on.

“I would like to acknowledge late Jimmy Chester,” said Phillip Edgar, who was there to help support the drummers.

Edgar noted that the Pacheedaht, Makah and Ditidaht are one family.

“Jimmy told us to carry on the work he started, to help Pacheedaht revive the culture,” Edgar said.

He went on to talk about the importance of canoe journeys for Indigenous people.

“That’s where we heal; it is a drug and alcohol-free event where families get together and learn their history and their culture,” he added, saying he was grateful for the project. “It afforded them the tools and resources to make this paddle possible: two nations – relatives, working together for cultural resurgence.”

Guests to the event, which was held March 3 in the First Peoples House, were treated to performances by Pacheedaht First Nations members with support from their Ditidaht relatives. The joy was evident in the faces of the young people as they danced across the floor in their new regalia. They were excited, happy and proud.

Wright Cardinal shared that the photo presentation she delivered came from the Pacheedaht youth who shared their images and their thoughts on what they’ve learned. The words were all enthusiastic ones.

“We had a good time working together,” Wright Cardinal said, adding that there is interest to continue work on the community-driven cultural resurgence efforts. “Roxy and I put in a research proposal for a larger fund for three years to support the work at the Pacheedaht Health Centre, the language and cultural revitalization in Pacheedaht with Ditidaht support.” 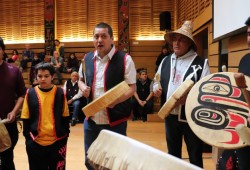 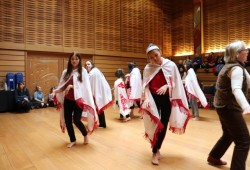 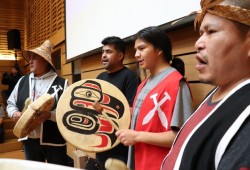 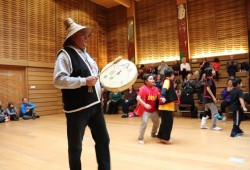 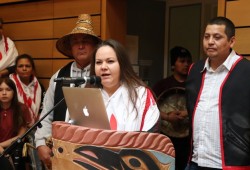