Diamond Atleo carries up the court at the provincial high school championships in Kelowna. Her Ahousaht team qualified for the top high school contest for the first time in over 20 years. (Marcie Callewaert photos)

Jack, who graduated in 2003, played five seasons with the Maaqtusiis Secondary School senior girls’ squad. But none of her teams advanced to the B.C. championships during her playing days.

Jack, however, now finds herself as the head coach of the Maaqtusiis senior girls’ club. The team ended a decades-long drought by participating at the provincial senior girls’ 1A tournament this past week in Kelowna.

Jack’s charges ended up winning one of their four matches at the 16-team tournament, which concluded on Saturday, March 7.

“It was very, very exciting and a very good learning experience,” said Jack, who was in her second season of coaching the high school club.

The Maaqtusiis Suns had qualified for the provincial tourney by placing second at its Vancouver Island championships last month. The team entered the B.C. event as the Number 14 seed.

“We kind of didn’t really know what to expect,” Jack said.

Jack added that the team from Victoria-based St. Andrew’s Regional High School, which won the Island championship, was the only entry at the provincials that the Suns had faced this season.

Despite their ranking, Jack said team members were confident they could have some success at the provincials.

“I think they had high goals coming into the tournament,” she said. “But I think after the first game they realized this is a really high level of basketball they have to play.”

“I think we were really nervous going into that game,” Jack said of the uncertainty facing an unknown opponent.

That uncertainty continued for the remainder of the tournament.

“We had to feel our way through every single game we played,” Jack said, adding her side was required to make several adjustments to its style of play depending on the challenges they faced. “I think it was a good learning experience for us though.”

After its first loss, the Maaqtusiis club was relegated to consolation action.

In their second outing the Suns were downed 72-89 by Bulkley Valley Christian School from Smithers. Bulkey Christian was the tourney’s Number 11 seed.

Maaqtusiis rebounded, though, to register a 65-61 victory over Bella Coola’s Sir Alexander Mackenzie School, seeded 15th, in its next match.

“They were the only other First Nations team in the tournament,” Jack said.

And she was pleased to hear a comment from one of officials who worked that contest.

“One of the refs said I’ve never seen two teams play with so much respect for each other,” she said.

The Suns ended up playing one more match after that, dropping a 60-54 decision to 16th-seeded Charles Bloom Secondary from Lumby.

As a result of this setback, Maaqtusiis officially ended up in 14th place at the provincials.

Cedar Wechlin, the athletic director at Maaqtusiis Secondary School, travelled with the team to Kelowna and served as an assistant coach at the tournament.

Though only a couple of parents from team members attended the provincials, Wechlin said the Suns had plenty of support, and not just from the Ahousaht First Nation.

“The Nuu-chah-nulth communities are all ecstatic,” he said, adding many members followed the team’s efforts at the provincials via an online stream.

Though an exact year was not known, it is believed that Maaqtusiis last had its senior girls’ club qualify for the provincials at some point in the 1990s.

Despite this fact and its ranking, Wechlin thought the team could perhaps fare slightly better than in did.

The Suns had just nine players on their roster this season. And the team had to play the provincials without its starting shooting guard Serena Kaloucokovale, a Grade 11 player who sustained a back injury at the Vancouver Island tournament.

“If she was in there (at the provincials) we probably could have squeezed out another game,” Wechlin said.

The Suns’ lineup featured just two players in Grade 12 – Sierra Frank and Juniper John - who are expected to graduate and not return to the team next season.

Both Jack and Wechlin are hoping the Suns will have another successful season and also qualify for next year’s provincials.

“Now we know what we have to do with our training and our nutrition,” Wechlin said. “Our kids have the skills to be there. We just need to work on and improve our fitness and conditioning.” 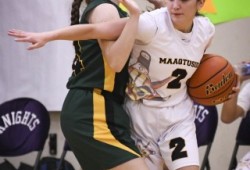 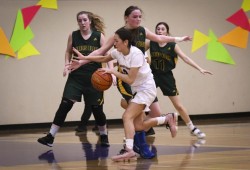 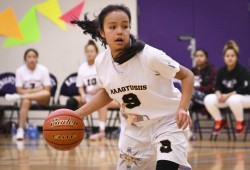 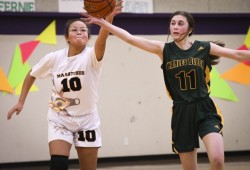