Five Nuu-chah-nulth nations are among communities hoping the puck finally drops this spring for the West Coast Multiplex, a community project 25 years in the making.

Working with the West Coast Multiplex Society, Tla-o-qui-aht First Nation stepped up last year as the main applicant to the Community, Culture and Recreation Program, a joint federal-provincial initiative that supports cost-sharing of infrastructure projects across B.C. They’ve been anxiously awaiting a decision since last fall.

Moses Martin, Tl-a-o-qui-aht chief councillor, feels the multiplex would benefit the health and wellbeing of families, especially those with children and youth on the west coast.

“The application has been sitting there for a whole year now, but I haven’t heard anything from the province,” Martin said. “It’s something that’s needed quite badly up in that area partly because there isn’t any recreational facility there.”

If funding is approved, the facility would be built in Tla-o-qui-aht territory on a five-hectare site near Tofino Airport within the next three years. An $18-million first phase would consist of a full-sized ice arena with a swimming pool to come later as funding allows.

Ahousaht, Yuułuʔiłʔatḥ, Hesquiaht and Toquaht are all on board, together with the municipalities of Tofino, Ucluelet and Alberni-Clayoquot Regional District’s Area C (Long Beach).

While the multiplex society was formed in 1995, the idea of a west coast recreation centre and community gathering place has been around longer than that.

“I think it goes back close to 30 years,” Martin said. “It goes back a long way. We’ve been building relationships with lots of communities — Tofino, Ucluelet and the regional district. That’s where it’s gone far. I’ve been on that board for a number of years and was co-chair at one point.”

Martin recalls when his own children were young and the challenge of keeping them involved in sports and recreation.

“When my two boys were involved in hockey, we drove to Port Alberni sometimes seven days a week,” he added. “There are a number of people doing the same thing. It’s one of those things that teaches kids a healthy lifestyle.”

Samantha Hackett, who chairs the multiplex board, is optimistic funding will come through.

“It’s been a long time coming,” she said, reflecting on the process. “Really, it’s only in the last 10 years we’ve seriously been talking about the project.”

With collaboration between so many communities, she believes the project is unique in all of Canada.

“We are working on something of a larger scale than this area has ever seen,” Hackett said. “When you’re going down an uncharted road, it takes a little longer.”

There is far more to the project than hockey, skating or tourism infrastructure, notes Hackett, who works in the west coast tourism sector as business manager at Long Beach Lodge Resort.

The building would also serve as a multi-purpose community gathering place for special events such as concerts, trade shows, celebrations and festivals. As well, the airport location would make it suitable as an emergency shelter.

“The reason that it has been such an important project for so many community members here is that there is a lack of facilities,” Hackett said.

A 2007 consultant’s study, funded by the society, the two municipal districts and ACRD, concluded the proposal could only succeed with all eight communities working together. A memorandum of understanding (MOU) between them eventually resulted in a business plan, preliminary design and construction cost estimate while accelerating capital fundraising. A pool of more than $1.1 million has been raised over the years.

Consultation with stakeholder groups and community fundraising have helped to galvanize local interest over the years, although support has fluctuated. In a 2012 referendum, voters granted the ACRD authority with 63 per cent approval to fund up to $550,000 in operating costs through regional property taxes. The society has always maintained, though, that capital costs would be covered by donations, grants and sponsorships.

In 2018, a referendum found strongest support for the project from Tl-o-qui-aht (89 per cent) as well as from Ahousaht (62 per cent) and Toquaht (63 per cent). In other communities, notably Tofino (31 per cent), support declined.

Hackett noted that Tofino Mayor Josie Osborne signed the MOU in 2014-15. Since then, the capital demands of the growing resort municipality have changed and the community feels a swimming pool should come before an ice arena.

“It’s just that they have other priorities now,” Hackett said. “They’re in support of the project in principle. It’s never been feasible for them to have a pool alone.”

The funding application is comprised of two components, a rural and recreational stream. Should they receive only one of those, Hackett is confident they will be back to apply for next round of funding.

“We are optimistic, especially because of the support of MP Gord Johns and MLA Scott Fraser,” Hackett said. “They’ve always been supportive.”

Johns served as project manager in 2012-2013 before he moved into federal politics. Many others have pitched in to get this far with the project.

“We would meet in my basement for a few hours every week,” he said. “We did a lot of that just to keep things in motion.”

He still serves on the 14-member multiplex board, one of hundreds of west coast residents who feel the multiplex could be just around the corner.

“Closer than we’ve ever been,” Taron said. 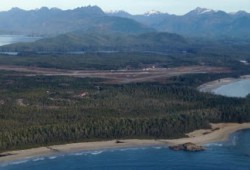