Suan Campbell learned to skateboard in a park built for Ahousaht in 2017. Now he’s taking his skills to the All Nations Skate Jam in Albuquerque, New Mexico. (Submitted photo)

It has been nearly five years since a tragic boat accident claimed the lives of six tourists aboard the Leviathan II off of Vancouver Island’s west coast in Clayoquot Sound. But the contributions of a grateful survivor and his friends continue to ripple through Nuu-chah-nulth communities in a very positive way.

The story starts a couple of years before the boat accident when Beth Luchies, a child and youth mental health councilor working for the Nuu-chah-nulth Tribal Council, began a collaboration with a man passionate about surfing. The plan was to bring people in to introduce children in Ahousaht to board sports, which includes surfing and skateboarding, as means to support healthy activities in the community.

Grant Shilling works for Get on Board, a registered non-profit organization that promotes board sports to develop social skills, self-confidence and goal-setting in youth. In 2013 Shilling and friends began making visits to Ahousaht from their home base in Courtenay shortly after Ahousaht’s first road was paved. The group began teaching children how to use skate boards. The kids eventually learned how to build and paint their own boards, and many skateboards were donated to the children.

The sport took off, and soon Ahousaht residents using the paved road had to watch out for skateboarders. A plan was launched to build a proper skatepark near the beach in front of the older part of the village.

Ahousaht band council and Landyachtz, a skateboard-making company, each donated $10,000 to the project, but they needed another $20,000 to complete the skate park. On Nov. 13, 2015 Shilling started an IndieGogo account with a goal to raise the $20,000 through crowdfunding. The fundraising drive began just over two weeks after the Oct. 25 Leviathan II accident.

There were 27 passengers and crew aboard the Leviathan II that day. They were idling by some reefs on the southwest side of Flores Island when they were struck broadside by a wave, capsizing the boat. A pair of Ahousaht fishermen happened to notice the distress signal and went in search of the source.

When they saw the accident site and the number of people that needed help they called over the VHF radio for assistance.

More boats arrived from Ahousaht, rushing to pull the 21 survivors out of the frigid water. Two of those survivors are a couple that had clung to a life ring with three others for at least an hour. They were rescued by Ahousaht grandparents Francis (Frenchie) and Michelle Campbell.

Dwayne Mazereeuw and his wife Elisa Kasha are the parents of two young children, who were not aboard the boat when the tragedy happened. In the days following the accident the couple contemplated ways in which they could thank their rescuers in a meaningful way.

Just a few weeks after his rescue, Mazereeuw caught wind of the fundraising drive to create a skate park for the children of Ahousaht. It turns out that Mazereeuw is a well-known skater in Calgary, Alberta. He works for New Line Skate, a company that designs and builds skate parks.

Mazereeuw knows first-hand how remote Ahousaht is. Located on Flores Island, the community is only accessible via a 40-minute boat ride or by float plane from Tofino.

With the support of his employer, Mazereeuw got on board with the fundraising drive offering to lend his expertise along with personal donations to the skate park. Within a week of going public with his support, the fundraising drive hit $18,330. Mazereeuw said his social media message box was exploding with offers of cash donations as well as help in the form of expertise, labor and building materials.

Early the following year the fundraisers exceeded the goal and construction of the skatepark began in spring 2016. The park was complete in the spring of 2017 and instantly drew children like bees to a flower.

One of those children was a boy named Suan (pronounced Swan) Campbell who, at age 7, developed a passion for skateboarding. Over the past three years he has been to the village skatepark every day that it’s not raining, said Suan’s grandmother Michelle.

Suan, now age 10, has gone to every skateboard clinic that Shilling and his team have offered in the village. Get on Board continues to visit Ahousaht about once every month helping the children build their boarding skills or dropping off donated boards. They teach the kids how to build and paint their boards.

According to Suan’s grandmother, during those rainy days that he can’t be at the skatepark, Suan is on YouTube watching pro skateboarders.

“He loves his YouTube and he loves to try what he sees,” said Michelle.

Suan’s grandparents, Frenchie and Michelle Campbell – yes, the same ones that came to the rescue of the Leviathan II passengers – support his passion for boarding in any way they can. They bring him to Courtenay to attend skateboard workshops and to practice at the indoor skatepark.

Last weekend they were on the road visiting skateparks all over Vancouver Island.

“He wanted to check out the one in Port Renfrew because that was designed by Dwayne Mazereeuw too,” said Frenchie.

Michelle says it is the fifth weekend they’ve spent like this with Suan.

“And he brings what he learns back home to share with the other kids,” said Michelle.

In the summer of 2019 Shilling became aware of something called the All Native Skate Jam and thought it would be wonderful to send a child from Ahousaht. He thought of Suan because he has been the most consistent skater in the community.

Suan Campbell will not only be the first Nuu-chah-nulth competitor in the All Nations Skate Jam but also the first Canadian. More than 60 Indigenous nations are represented at the event in Albuquerque, New Mexico.

The events take place April 23 to 25 but the family must leave five days earlier because they are traveling by road. On April 20 two van loads will leave Tofino for the start of the 5,200-kilometre return road trip. Ariel Campbell, Suan’s mother, said she and her husband Trevor are going along with the rest of their children. Both of Suan’s grandparents and great grandfathers plan to go along as well.

Suan says he is happy and excited about the trip to Skate Jam.

The family has purchased commemorative shirts to sell and to raffle off. In addition to the GoFundMe page initiated by Shilling, Landyachtz has pledged to support the cause by donating $1 for every share of a Facebook post they created.

Shilling will accompany the family on the trip to Albuquerque.

“This is a perfect capstone to a tragedy that has turned to redemption,” said Shilling.

To purchase shirts or to make an e-transfer donation contact Ariel Campbell at ariel_14_745@hotmail.com. The Crowdfunding page to make donations for Suan’s journey to Albuquerque is www.gofundme.com/f/suans-journey-to-complete-the-circle. 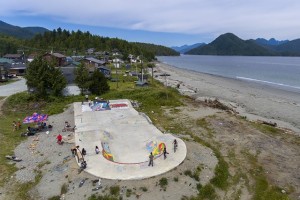 The Ahousaht skate park was built in 2017. (David Leslie/Landyachtz photo)