Tamia Edgar (taking shot on left), who is a member of the Ditidaht First Nation, was expected to play a key role on the B.C. girls' under-19 basketball team at the NAIG. (Photo submitted by Tamia Edgar)

The 17-year-old, a member of the Ehattesaht First Nation, was expected to play his first season of junior lacrosse. Amos was hoping to suit up at the Junior B level for the Nanaimo Timbermen.

Amos, who lives in Nanaimo with his mother Kelly, was also among those who were expecting to be named to the British Columbia boys’ under-19 lacrosse squad that was to compete at the North American Indigenous Games (NAIG), which were to be held in Halifax and surrounding communities this summer.

But due to COVID-19 concerns, not only is the start of Amos’ junior career in limbo, this year’s NAIG have also been cancelled. The plan right now is to stage the multi-sport Indigenous games in the Nova Scotia capital in the summer of 2021.

Amos had hoped to be named to the provincial squad at its final tryout camp. Those tryouts, which were supposed to be in Kelowna in late March, were cancelled.

“I kind of felt disappointed,” said Amos, a Grade 11 student at John Barsby Community School in Nanaimo. “I think I would have had a good chance to make the team.”

Amos was hoping to be one of several Nuu-chah-nulth athletes that were expected to be named to various NAIG-bound provincial teams. This list would have included 19-year-old basketball player Tamia Edgar, a member of the Ditidaht First Nation.

Edgar, who lives in Vancouver, would have in all likelihood played a key role for the B.C. girls’ under-19 team at the NAIG.

Edgar said she was disappointed once she discovered the squad’s final tryouts and the NAIG were cancelled.

“I was pretty bummed out because I was doing a lot of practicing,” she said.

She was one of 16 players in the running to be named to the provincial club. The final roster of 12 individuals was to be named following a camp, which has been set for March 14-16 in Kelowna.

While COVID-19 has created worldwide uncertainty, Edgar was surprised organizers cancelled NAIG, an event that was four months away. The Games were scheduled to be held July 12-18.

“I was pretty shocked about that,” she said. “But I understood it as I live in one of the cities shutting down everything.”

Edgar’s disappointment over the NAIG cancellation was even greater since this marked her final year of eligibility for the Games.

But NAIG organizers have already indicated they are willing to change their age groupings and allow those who would have been in their final year of eligibility to take part in the 2021 Games.

“My mother let me know that they are letting people who were maxing out this year go for next year,” she said. “I was happy about that. So I’m keeping up with my training now.”

Amos, who played Midget lacrosse in Nanaimo last season, has no idea when the Timbermen might be able to resume training. The squad had just one practice before its season was placed on hold. The team, which competes in the BC Junior B Tier 1 Lacrosse League, was originally scheduled to begin its regular season in late April.

Amos said trying to stay in shape and be ready for when - or if - the 2020 lacrosse season will resume has proven to be difficult.

“My mom is concerned about me going anywhere outside,” said Amos, who lives in a Nanaimo townhouse with no backyard with his mother Kelly.

His father Bruce Lucas is a member of the Hesquiaht First Nation.

Amos is hoping the Timbermen will not be sidelined for much longer.

“Hopefully in a month or so we can start up again,” he said.

If that does indeed happen, Amos believes there could be a period of adjustment players will need to go through because of their recent inactivity.

“Everybody is going to need to get used to playing again,” he said.

As for Edgar, she is trying to make the best of her situation and stay in shape.

Edgar, a 5-foot-8 forward, had graduated from Britannia Secondary School in Vancouver in June of 2019.

She spent this past basketball season toiling with a Vancouver-based Indigenous squad called All My Relations. She had also been working full time in childcare but that position is now on hold.

To keep in shape, Edgar said she has been running five-kilometre routes through Vancouver streets three times a week.

Plus, she has downloaded an app which provides her with daily basketball challenges. Though she does not have a backboard and basket, she is able to work on suggested dribbling drills on her back patio. 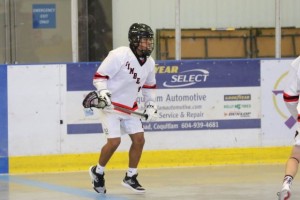 Bryce Amos, who is hoping to play Junior B lacrosse this season with the Nanaimo Timbermen, was also hoping to represent B.C. at the now cancelled North American Indigenous Games. (Photo submitted by Bryce Amos)