Detonation of an explosive blast to remove river rock at the Big Bar landslide. (DFO photo)

A race against time to save Fraser River salmon hasn’t slowed despite the global pandemic.

With the river sure to rise in coming days, efforts to clear the channel at Big Bar Slide will be put to the test as early spring chinook head upstream in April.

Blasting and rockwork have been going full tilt for the past two months. Crews working for primary contractor Peter Kiewit Sons (Kiewit) are making the most of low water levels, a narrow winter window for channel remediation in the aftermath of last year’s Big Bar landslide north of Lillooet.

DFO met with representatives of the Upper Fraser Fisheries Conservation Alliance in early March to discuss options and proposed plans.

“I think the progress so far has been remarkable considering they didn’t get at it until mid-January,” said Gord Sterritt, UFFCA’s executive director. “I think it’s going reasonably well.”

“We’re confident the work that’s been done will be successful,” Sterritt said.

Amid the obvious engineering challenges of the remediation — removing tonnes of submerged rock from river rapids — the COVID-19 pandemic developed as another logistical factor. Kiewit adopted additional health and safety measures, including restricted site access to limit risk of viral exposure to workers. Non-essential site visits were halted and protocols were adopted to minimize larger gatherings in enclosed spaces.

“We are reviewing all planned activities on the Big Bar site to ensure we can meet public health requirements while still moving forward with this necessary work,” DFO stated in mid-March.

In recent days, workers have continued making steady progress, blasting submerged boulders from the slide, shaping a riverside bench for a “nature-like” fishway and preparing for a second blast of the east toe of the rock face in April.

Workers were able to reach channel debris through construction of riprap “fingers” on the west side of the river. The debris has since been blasted away and a safety canopy was constructed on the river’s west bank.

North of the east toe, crews reached additional boulders exposed by low water levels and have been drilling in preparation for blasting. On the east toe itself, a heavy lift helicopter has delivered drilling equipment to prepare the toe for more blasting in April.

Fish monitoring within the blast area is carried out before the detonation of explosives in boulders slated for removal. To date, no fish have been detected prior to blasts and no impact on fish was observed.

Sterritt said it’s important to remember that the weather is changing and they’re running out of time. That holds true not only for the channel engineering work but for contingency planning as well. There are places along the rapids that may pose a challenge for migrating salmon at certain water levels, Sterritt explained. Recent modelling done at low water revealed a mass of slide debris situated elsewhere in the channel could cause heavy flows at high water, stopping fish passage. A monitoring program will be implemented throughout the salmon migration period to gather as much information as possible and to aid with contingencies should the need arise.

“We know from last year we can’t play catch-up,” Sterritt said. “We need to be ahead of the situation.”

A team of experts has been developing the plans and designing alternative fish passage systems to move fish during high water, when passage will not be possible for an extended period of time. Plans include constructing a “nature-like” fishway, installing a pneumatic fish lift system, and developing a trap-and-transport option to collect salmon below the slide for release up river.

A First Nations leadership panel, established during last summer’s emergency response phase, re-engages in April. The panel will resume its focus on consensus decision-making on critical project milestones including mitigation of fish passage. Panel members include leadership or delegates from First Nations impacted by the landslide or those with interests in Fraser River salmon stocks.

“We want the First Nations leadership panel members from B.C. marine areas to help make those decisions and endorse the work,” said Sterritt, who will chair the panel. 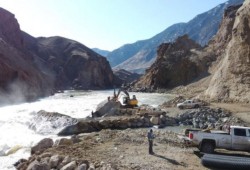 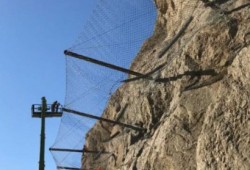