A Cermaq employee gets ready for a shift in the company's processing plant. Aquaculture operators are seeing demand continue during the COVID-19 crisis, as a drop in the restaurant market is made up by increase in retail. Pictured is a Cermaq salmon farm in Ahousaht territory. (Cermaq Canada photo)

Measures to slow the spread of the coronavirus have put millions of Canadians out of work, while businesses close operations under government orders against crowds and close contact. But fish farms continue to operate, as they have been designated an essential service to ensure food supply chains remain unbroken.

On the west coast of Vancouver Island aquaculture operations continue, but companies have had to adapt to minimize the risks of spreading the highly contagious virus. Trips by boat and crew vehicles have increased to cut down on the number of passengers and their vicinity to each other in each vessel.

Managing over a dozen farm sites, Cermaq is the largest aquaculture operator in Clayoquot Sound. Twice as many employees are now driving to the company’s facility in Tofino instead of riding on the crew vehicle, and more buses are being used to thin out passengers during transportation from Port Alberni to the work site in Tofino.

“We’ve increased the crew bus runs that have allowed us to achieve an 80-95 per cent reduction in our staff riding those buses,” said Cermaq Canada Managing Director David Kiemele. “We’ve reduced people in crew boats by 50-70 per cent, we have also increased the crew boat runs per week by 120 per cent, and we have doubled the amount of boats that we are utilizing.”

Creative Salmon has also adjusted how it transports workers to its sites near Tofino. Limits have been imposed on the number of people travelling to work together in vans and boats.

“Staff used to move among our four sea sites helping with tasks as workload demanded, but this practice has changed,” said Creative Salmon general manager Tim Rundle in a press release.

Grieg Seafood, which farms Atlantic salmon in Nootka Sound, Esperanza Inlet and other locations on the east side of Vancouver Island, is no longer using crew boats or vans to transport its workers to remote sites. Now employees use personal transportation to Gold River, then board smaller boats designed for each farm site.

“Previously the farms were close enough where workers might go from one farm to another farm,” said Grieg’s Managing Director Rocky Boschman. “We’ve stopped that now. When people go out to a farm, they’re isolated only on that farm for their entire shift.”

“The number of staff on many farms has been reduced to essential levels,” noted Shawn Hall, communications manager for the BC Salmon Farmers Association. “Rather than one week on, one week off, some farmers have gone to two weeks on, two weeks off in order to minimize contact during transportation.”

“We have implemented cleaning and disinfection procedures across all living areas,” added Kiemele. “That includes a minimum twice-a-day wash down and sanitization of all crew vessels.”

Grieg Seafood has groups of two or three staff who normally stay on a farm site for an eight-day stint. The company has introduced more stringent standards for the shared kitchens.

“People are cleaning more rigorously than they did before, they have the products on the farm to clean the common areas,” said Boschman. “We’ve really just tried to reduce the possibility that someone is going to come to work and infect multiple people.”

Kiemele and some other Cermaq employees are working from home, but many staff whose duties are in processing plants, warehouses, hatcheries or on ocean pens are still heading out to sites. These workers are being paid an essential services premium, said Kielele, adding there have been no layoffs to date.

Daily lunches have been added to the breakfasts that were already being provided to ensure workers at Cermaq’s Tofino facility don’t need to venture into the community.

“The food that people require to see them through the course of the day can all be found within our four walls,” said Kiemele. “It eliminates the need for our employees to go into town to find food.”

As a measure to prevent gathering and transmission of the coronavirus, restaurants across B.C. have been ordered by the provincial health officer to provide take-out only. Salmon farmers are seeing this reflected in what sort of packaging and cuts their purchasers demand.

Cermaq normally sells 35 per cent of its salmon to Canadian buyers, with 60 per cent going to the United States and the remaining 5 per cent to Asian markets. The volume of demand has remained stable during the pandemic, said Kiemele.

“Japan has recently been requesting additional volume, because I think they’re further along on flattening the curve,” he said.

Asia accounts for 15 per cent of Grieg’s customers, a market where Boschman sees opportunity as new COVID-19 cases decline in China and elsewhere in the east.

“There’s growing opportunity for Canada to ship towards there, especially as they start to recover from their virus situation quicker than we’re recovering. As things get back to normal in Asia, it will certainly help us,” he said. “We’re working every single day really, really hard to try to get the salmon to the market, but the market is there.”

As much as 40 per cent of Cermaq’s employees on the West Coast are Indigenous, a reality that has led the company to be in daily communication with Ahousaht leadership as the First Nation works to prevent COVID-19 from reaching its Flores Island community.

“I personally have spoken to Maquinna a few times about this,” noted Kiemele of his contact with the Ahousaht Tyee Ha’wilth. “We are very much following their leadership in terms of what they need to do to keep their village safe.”

As a remote community, Ahousaht residents normally rely on venturing to Tofino or other Vancouver Island centres for supplies. But the ongoing risk of contracting the coronavirus makes such trips a hazard, so care packages are being sent to the Flores Island community. Cermaq recently contributed to this initiative with 2,000 cans of seafood from St. Jean’s Cannery in Nanaimo.

“We’re also supporting a broader program to ensure Ahousaht has the means to deliver care packages to all of its members,” said Kiemele.

Creative Salmon has also pledged to adjust its business according to the needs of the Tla-qui-aht First Nation, as the company manages fish farms in their territory.

“We have reached out to Tla-o-qui-aht leadership and we will adjust operations as needed to support the nation’s needs,” said Rundle. 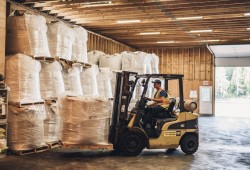