Remote communities remain closed off, but health authorities hint at easing of restrictions in May

A gate in the Ehattesaht community of Ehatis has now been closed to non-residents, the latest in a series of protectionist measures introduced by Nuu-chah-nulth communities over the last month, (Vicki Wells/Facebook photo)

Lockdowns are continuing to spread through remote Nuu-chah-nulth communities, but provincial health authorities are hinting that restrictions imposed over the last month are working, and that some measures could be lifted in May.

This week the Ehattesaht First Nation announced that a gate had been closed in their reserve next to Zeballos to anyone but local residents and essential services. This blocks road access to the Nuu-chah-nulth communities of Ehatis, Oclujce and Kyuquot. This measure follows a local state of emergency declared for the Ka:'yu:'k't'h'/Che:k'tles7et'h' First Nations village of Houpsitas on Vancouver Island’s northwest coast, restricting access to residents only, while limiting trips outside to essential ventures.

Meanwhile similar measures are in place in southern Nuu-chah-nulth communities. Anacla now has a checkpoint that only permits access to residents of the village.

“If they’re not a resident they’re turned around,” said Robert Dennis Sr., chief councillor of the Huu-ay-aht First Nations.

In nearby Bamfield, a general store owned by the Huu-ay-aht has introduced a self-checkout system, thereby eliminating direct contact with staff and following the provincial health officer’s directive to maintain a six-foot distance from others while out in public.

“You don’t even get within 10 feet of the storekeeper,” said Dennis.

For over a month now people across British Columbia have been opting to stay home to prevent the spread of COVID-19, the medically incurable respiratory disease that has gripped the world in a pandemic. On Friday Dr. Bonny Henry, B.C.’s provincial health officer, and Minister of Health Adrian Dix presented models indicating that the public’s response to the coronavirus has avoided disastrous scenarios playing out in Italy, Spain and New York City.

There have been 1,618 confirmed cases of COVID-19 in B.C., including 43 additional infections registered on Friday. Ninety-four of these have ended in death. But 966 of cases have fully recovered, and the rate of infection has slowed to less than 50 a day since April 2. This aligns with models the province presented on March 27, showing B.C.’s rate of infection being close to that of South Korea, and under the severity of China’s Hubei province, where the new coronavirus first emerged in late 2019. Overall, B.C. now has fewer cases per million people than the national rate, a trend close to that of Australia and South Korea, while falling far below Italy and the United States.

“The difference between what could have been and what actually happened here in B.C. is because of the measures that we as people from B.C. took together, each of us individually and collectively,” said Henry.

B.C.’s first coronavirus case was discovered on January 26, affecting a person who had recently returned from overseas. A few other cases linked to international travel emerged until early March, when the total caseload was still under 10. Then during the second week of March a steep climb in cases began, as infections with not direct connection to international travel spread through all of B.C.’s health regions.

This led to a succession of measures to slow the spread, including bans on all gatherings of over 50 people introduced March 16, school closures the next day and a provincial state of emergency on March 18.

This led to the cancellation of multiple events that normally draw crowds of Nuu-chah-nulth-aht, including the Junior All Native basketball tournament in March, Tribal Journeys and the North American Indigenous Games in July. An announcement is yet to be made for the B.C. Elders Gathering, which is currently scheduled for July 7-8 in Vancouver.

While presenting the latest models with Dr. Henry, Dix acknowledged the difficulties brought by social isolation.

While she stressed that restrictions can’t be lifted yet, Henry added that the need for more connection with others will grow in time.

“We need to find ways to increase our social interactions as well, because we know that’s important for our mental health,” she said.

Both indicated that changes could be coming in May, possibly beginning with the current postponement of all scheduled surgeries. This was imposed by the province to clear space in hospitals for a possible surge in COVID-19 patients, but now just 46 per cent of critical care beds are occupied and coronavirus hospitalisations have declined to 119.

If the current trend continues, Henry indicated that a “hybrid” situation could be introduced to get some sectors operating again, including public education.

“It may mean smaller classes, it may mean some children going to school at certain times,” she suggested. 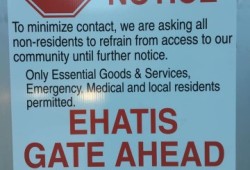