Eight-year-old Solomon Watts runs through the Tseshaht First Nation reserve on May 7 to raise funds for the Canadian Cancer Society. The efforts was inspired by Solomon’s grandfather, Wally Samuel, who is undergoing chemotherapy treatment. (Eric Plummer photos)

Eight-year-old Solomon Watts was keen to run an estimated two-kilometre route through streets on the First Nation’s reserve on Thursday, May 7 to raise cancer awareness.

The event, dubbed Solomon’s Run For Cancer, was also to recognize his grandfather Wally Samuel Sr., a well-known and respected Ahousaht member, who is currently undergoing chemotherapy following colon cancer surgery this past December.

Solomon was intent to raise funds from his run for the Canadian Cancer Society.

The original goal was to raise $81. The number 81 represented the combined ages of Solomon and his 73-year-old grandfather.

Before Thursday’s run, however, a total of $733 had already been raised. Slightly more than $200 was also collected during the run. And Solomon’s mother Robyn Samuel said several others had also mentioned they would be sending her e-transfer donations, which would in all likelihood push the total past the $1,000 mark. Donations will continue to be collected and can be sent via etransfer to robynsamuel@hotmail.com

“It made my son really proud,” Samuel said when she told Solomon that donations were closing in on $1,000 on Thursday. “His eyes really lit up.”

Samuel, who has four children, said family members are disappointed that a pandemic has prevented them from showing affection.

“With this COVID-19 going on my kids really miss hugging their grandparents,” she said.

Though Solomon has been going on frequent bike rides recently, Samuel said family members discussed the possibility of having Solomon do a fundraising run about a week ago.

“He’s quite the little athlete,” she said. “He really missed school and his (physical education). P.E. is his favourite class.”

“I always say if you want to get something out then tag my father in a post,” Samuel said. “He’s got almost 4,000 Facebook friends.”

Solomon began and finished his run at Haahuupayak School, where he is a Grade 3 student. The route, through the reserve next to Port Alberni, is the same one that students from the school follow each September during their Terry Fox Run.

Solomon completed the run in about 10 minutes and 30 seconds.

“I feel happy and proud,” he said.

Solomon’s father Richard Watts cycled behind his son and paced him during the run.

About a dozen staff members from Haahuupayak School also showed up to offer support for the run. Some others also lined the course to cheer on the young runner.

“He wanted to sprint right off the bat because the fans were there,” said the elder Watts.

Richard Watts said that his son did cramp up briefly near the halfway point of the run because of that initial burst of energy.

“I told him to keep going,” Watts said. “He never stopped moving his feet.”

Solomon was also able to finish strong, in front of the supporters, including his grandfather, waiting at the school. Wally Samuel said he considered running the last stretch alongside his grandson. But he was persuaded by his 15-year-old granddaughter Neve not to.

“I didn’t expect him to run that fast,” Wally said. “My granddaughter was telling me ‘No grandpa, you can’t do that because he runs too fast’.”

Wally, however, was rather pleased of his grandson’s efforts.

“It made me really proud of him,” he said.

Wally was especially pleased Solomon was helping out a worthy cause.

“He’s aware and he acknowledges cancer has happened in our community,” he said.

Solomon has lost family members on both his mother’s and father’s side of the family to cancer.

Because of recommended COVID-19 restrictions, Wally Samuel was not able to kiss or even hug his grandson at the completion of his run.

“There was a lump in my throat and I was holding back the tears,” Wally said. “I told him how proud I am of him. And I told him a lot of people were proud and appreciative of what he’s doing.” 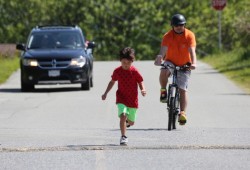 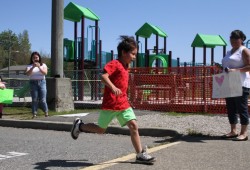 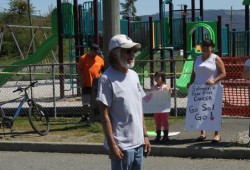 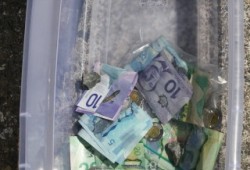