On Saturday, May 9 fishermen with the Tla-o-qui-aht First Nation arrived at Alert Bay to give an estimated two tonnes of seafood. Alert Bay has seen 30 coronavirus infections, with one fatality. (submitted photos)

It might have seemed like a simple gesture but it won’t be soon forgotten by residents of a remote Indigenous community in British Columbia.

Those in the ‘Namgis First Nation in Alert Bay have been reeling in recent weeks following a COVID-19 outbreak in their community, located on Cormorant Island, east of Port McNeill.

A total of 30 people in Alert Bay tested positive for the virus. One of those individuals, a 59-year-old woman died with the virus in late April, becoming the first person in an Indigenous community in the province to pass from COVID-19.

Don Svanvik, the Chief of ‘Namgis First Nation, confirmed on Tuesday, May 13 that all of the others who had tested positive for the virus in his community have since recovered.

The spirits of community members were also greatly lifted this past Saturday (May 9) when three members of the Tla-o-qui-aht First Nation arrived via a fishing boat with a massive gift of fresh ceremonial groundfish, to be distributed to community members still in lockdown.

“It was a magnificent gift and we’re forever grateful for that,” Svanvik said.

“We were just trying to help out another nation that has been hurt pretty hard by the virus,” said Chief Moses Martin. “We were just helping out a community that needed some help.”

The chief added his own community has been fortunate that it has not had any positive COVID-19 cases.

The Tla-o-qui-aht fishermen had contacted ‘Namgis First Nation officials to tell them about their Saturday morning arrival.

The day before Moses Martin had contacted Svanvik and the two chiefs had agreed the Nuu-chah-nulth fishermen would be allowed to enter the locked-down ‘Namgis First Nation to make their delivery.

The trio stayed on their boat, named Constellation, while they unloaded all the fish. Though there was no official weighing, it is believed as much as two tonnes of fish were dropped off.

About 20 ‘Namgis First Nation members, including Svanvik, came to the community dock to greet the boat. A welcoming song and dance were performed for the Tla-o-qui-aht fishermen.

Upon accepting the fish, ‘Namgis members had set up tables to process them into freezer bags. Svanvik said community members then delivered the fish to 190 households, with the amount of meals provided for each determined by how many people are in each home.

He added several people in his community had meals of fish and chips during the Mother’s Day weekend.

“This is real old-time stuff making that kind of gesture,” Svanvik said. “We’re filled with gratitude. Everybody was extremely happy what they did for us. This is really an awesome thing and it goes back obviously to being traditional people. In our tradition you help people that need help.”

Expenses for the gesture were covered by TFN Seafoods, a business owned by the Tla-o-qui-aht First Nation.

TFN Seafoods manager Roy Alexander said expenses totaled about $800, the majority of that being gas for the boat to get from the west side of Vancouver Island to the east coast.

“I think they just wanted to help another First Nation that was pretty downtrodden,” Alexander said.

Alexander added the move had a great effect.

“The people that received this ceremonial gift felt honoured,” he said. “Some had said they were feeling lonely and it really lifted their spirits in the community.”

Alexander added he’s hoping others feel inspired by this generosity and do their bit to help others who might need assistance.

“We’re hoping people help out their neighbours like this,” he said.

Alexander mentioned another delivery of fish could possibly also be made in the future.

“We’ll see if it helps the community and who knows about other communities (that might need help),” he said. 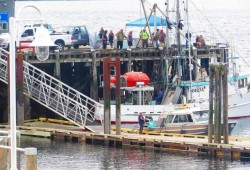 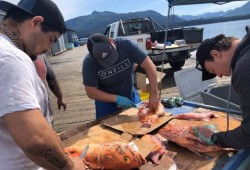 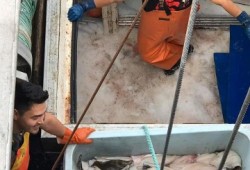