Efforts to prevent invasive mussels from infesting B.C. waters, ramped up in recent years, are not enough to ease concerns about a potential colonization that could be catastrophic to salmon.

“The province only sees 80 percent compliance at their inspection stations and that is not good enough,” said Erin Vieira, program manager with the Shuwsap Watershed Council, based in Kamloops.

Boat inspection stations have opened for the season at various locations throughout the province to check watercraft for zebra and quagga mussels, unwanted hitchhikers from contaminated waterways out East. The invasive bivalves have caused havoc for fish populations as they steadily move west.

Since the B.C. Invasive Mussel Defence Program was piloted five years ago, inspections have increased by tenfold. In 2019, a total of 52,000 boats were inspected. Among them were 22 mussel-fouled boats coming from Ontario, Michigan, Utah and North Carolina. At least four of those boats were destined for Vancouver Island waters.

While the incidence of detection is relatively low, a single point of entry by the prolific molluscs could explode through B.C.’s interconnected freshwater systems. Even with reduced tourist traffic due to the COVID-19 pandemic, travellers continue to stream west as though this season were like any other.

“We’re still very concerned,” Vieira said. “The provincial borders are still open. The majority of watercraft are coming from Ontario and Manitoba. There’s nothing officially stopping that from coming to B.C.”

From mid-May until late October, inspectors with the B.C. Conservation Officer Service (COS) will check boats for aquatic invasive species and educate people about the importance of “clean, drain and dry,” preventative steps all boaters are expected to practise when transporting boats between water bodies.

“While we are all protecting ourselves during this unusual time, each of us can take simple actions to protect our waters from invasive species,” said Dave Bennett, chair of B.C.’s invasive species council. “Whether you are a paddler, boater or a fisher, let’s continue to work together and make sure all of our equipment and vehicles are clean, drained and dry before going to a new waterbody.”

“As federal government research has noted, we are especially vulnerable due to our warm water temperatures and high calcium content, which puts us at greater risk than other regions since these conditions increase the chance of the mussels’ survival,” the groups noted.

They hoped the recently appointed minister would respond with federal resources to expand inspections.

“No, we never did receive any reply correspondence from Minister Jordan,” Veiera said.

Former minister Jonathan Wilkinson told them in 2018 that DFO could not provide support for inspections since it does not have budgetary authority. Refusing to accept this, they have followed up with Mel Arnold, North Okanagan-Shuswap MP and Conservative fisheries critic, in hopes of prodding the federal government into action.

About the size of a fingernail, zebra and quagga mussels are part of the same species. They were originally found in Europe and were first detected in the Great Lakes in 1988. Since then they have spread through waterways as far west as Lake Winnipeg in Manitoba, where they are blamed for the near-extinction of native species. They have also affected lakes in 24 states including California and Colorado. Cleanup and control efforts run into the hundreds of millions of dollars and containment efforts have had only limited success. Not everyone is aware of the distinct threat to wild salmon, though.

“This is a huge concern,” Vieira said.

Authorities in Washington State have also sounded the alarm on invasive mussel species, worried the problem will continue moving west and threaten salmon. Zebra mussels were found on a boat in Montana last year.

How are freshwater mussels a threat to salmon?

Washington’s salmon recovery office believes invasive mussels would be devastating for salmon, clogging fishways, ladders and other structures. They could reduce plankton levels, alter water temperature, lower dissolved oxygen levels and change the type of plants in riparian areas, all of which would harm salmon, which rely on cool, oxygen-rich water to spawn. Pacific salmon already face multiple environmental threats with many stocks in grave decline.

B.C. groups are calling on Ottawa to provide more inspection stations around the province’s perimeter, expand early detection monitoring to ensure more testing and enhance education and outreach. They hope to see the government properly enforce its own aquatic invasive species regulation by containing infestations.

People are encouraged to report watercraft suspected of transporting invasive mussels to the Report All Poachers and Polluters (RAPP) line at 1 877 952-7277. To determine if a boat is high risk and should be decontaminated, email COS.Aquatic.Invasive.Species@gov.bc.ca. People can also report other potential invasive species through a special Report Invasives app: www.gov.bc.ca/invasive-species

One consolation is that inspections appear to be successful in preventing invasive mussel outbreaks in B.C. waters. Last year, 892 samples were collected from 79 lakes across the province. All came back negative. 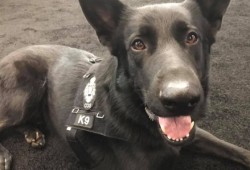