Protestors gather in Ucluelet to march for Chantel Moore

When Marissa Mack reached the edge of the whisky dock in Ucluelet, she turned around and began to cry when her eyes met the assembly behind her. Over 100 protestors poured around the corner at the top of the hill, far surpassing the 50 people she expected.

Demonstrators from Ucluelet, Tofino and the surrounding Nuu-chah-nulth communities gathered to march for Chantel Moore, a Tla-o-qui-aht woman who was fatally shot by the police in New Brunswick on June 4, and for George Floyd, a 46-year old black man who was killed by a white police officer on May 25 in Mineapolis.

“I had no relationship to her other than the colour of our skin,” said Mack, who organized the demonstration in honour of Moore.  “All lives don’t matter until black and brown lives matter.”

The protest marked the “beginning of a revolution,” said Mack. “It’s the beginning of changing the corrupt, broken system that controls us.”

As the crowd marched through the streets they screamed, “say her name!” of Chantel Moore, and persisted with chants of “say his name!” in honour of George Floyd.

Once the protestors caught up to Mack, she instructed them to lie down on the dock. With their faces to the ground, they remained silent for 8 minutes and 46 seconds – the amount of time that Floyd was pinned down under the knee of Minneapolis police officer, Derek Chauvin.

An eagle soared above as the wind blew across the dock, muting the sobs that were uttered from the crowd.

Rendered speechless by the show of support, Mack said that the protestors “are helping us use our voice. We’re not listened to as brown people. We need the extra boost of support.”

Speakers like Dan Wright urged the crowd to educate themselves, fearing that in a couple of weeks everyone will move on to the next “fad,” or news event. “Don’t leave us all still standing here alone,” he pleaded.

The Ucluelet RCMP assisted the demonstration by blocking off vehicle access to keep the protestors safe, and in a show of solidarity, Sgt. Steve Mancini and Constable Yannick Harry took a knee beside elder Richard Mundy at the end of the march.

“George Floyd and Chantel Moore deserve better,” said Mack. “That’s what this is for. It was for them.” 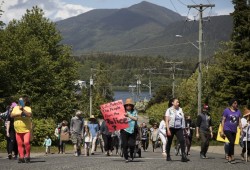 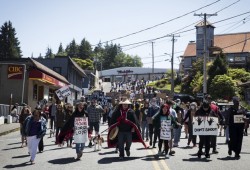 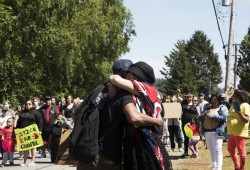 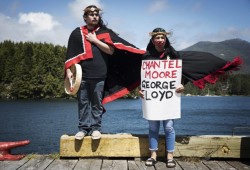 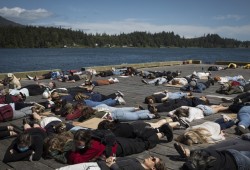 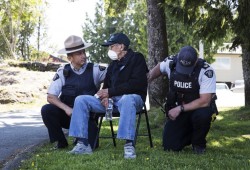