Daniel John loads items from the non-profit organization, Power To Be, onto the Ahousaht Lone Cone crew boat in Tofino, on June 8. 2020. (Melissa Renwick photo)

In its ongoing efforts to become a dry community, Ahousaht has established a new sobriety initiative.

It came to a head at the end of April, during the height of the COVID-19 pandemic, when community members no longer felt protected or safe to walk their streets.

Using cultural and hereditary laws to protect their people, community leaders began by placing a 9 p.m. curfew, which has since been adjusted to 10:30 p.m., with a warning at 10. It led to a decrease in group gatherings and house parties, which community members feared would trigger a coronavirus outbreak.

With the Lone Cone Hostel and Campground being closed to visitors, the facility has been re-purposed into a treatment centre.

The ten volunteers who stepped up to be the first cohort are now into their fourth week of the program.

“You can really see the change in them,” said hereditary chief Walter Thomas. “They’re glowing. You can feel it – their energy is really good.”

The first group has inspired a second wave of 15 volunteers to go through the program at the end of the month. Rather than following the 12 steps of Alcoholics Anonymous, they are using cultural healing practices, such as sweats and brushings.

The ability to heal at home and with their own people is what has “hit them in the heart,” said Caton of the volunteers currently in the program.

“We can’t wait for the federal government to fix things,” said Tyee Ha’wilth Maquinna, Lewis George. “We have to do it ourselves.”

With the help of the Victoria-based non-profit organization, Power To Be, a $2-million health and wellness center is in the works. But the construction of the 32-bed residential wellness centre was put on on hold due to the ongoing pandemic.

To help the community as they await the new facility, the not-for-profit organization Power To Give donated $100,000 to the community to run two sessions of the new sobriety program.

Tim Cormode, CEO of Power to Be, and chief strategy officer, Jason Cole, delivered a care package by float plane to the Tofino harbour on June 8. Representatives from Ahousaht’s hereditary chiefs and health authority greeted them with songs and drumming.

“It’s nice to see communities empowered that are often ignored and neglected,” said Cormode. “These communities are starting to see possibilities they’ve been told they could have for years and years – false promises that have never ever happened.”

Grassroots and not-for-profit organizations rallied together to create care packages valued at $7,000 for remote communities, like Ahousaht.

The items, which included mason jars to store traditional medicines, were transferred from the plane to the Ahousaht Lone Cone crew boat, to be delivered to the hostel-turned-treatment facility on Meares Island.

While George said he is proud of the work being done, he knows that it’s just the beginning.

“It’s not just six weeks that it’s got to happen,” he said. “It’s going to be a lifetime.” 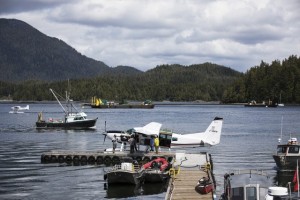 A Cessna float plane lands in the Tofino harbour with a variety of supplies for Ahousaht from the Victoria based non-profit organization, Power To Be, on Monday, June 8. 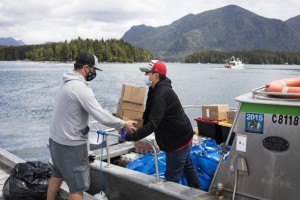 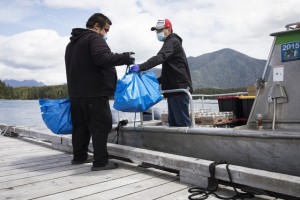 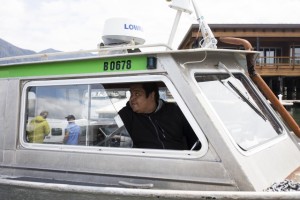 Daniel John backs off the Atleo Air dock in the Tofino harbour with the supplies from the Victoria based non-profit organization, Power To Be, on Monday, June 8.