Leaders warn against reopening US border

Nuu-chah-nulth leaders are speaking against reopening the US border, amid concerns that visitors from states with high coronavirus infection rates could join the growing crowds travelling through the province this summer.

The Canada-US border remains restricted to the essential transport of goods, although in early June the federal government eased measures to allow access to immediate family members of Canadian residents – with the requirement that all visitors must quarantine for 14 days upon entry.

The border closure expires June 21, and Nuu-chah-nulth leaders are pushing for an extension to protect residents in the Ḥahuułi. In a press release issued on June 9, the Nuu-chah-nulth Tribal Council stressed that the protection of its members must be assured before recreational activities bring the risk of infection into vulnerable Indigenous communities with little access to health care.

On June 9 the NTC passed a motion that access to the traditional territories of Vancouver Island’s west coast nations must remain restricted to residents until COVID-19 testing is “readily and consistently available”. The motion also calls for the screening of visitors to ensure they don’t have symptoms, and that proper contact tracing is in place for residents if a coronavirus infection becomes evident.

After half a year of the novel coronavirus spreading around the world, British Columbia has come out ahead of the pack among North American jurisdictions trying to control the spread of the highly infectious respiratory disease. The province’s over 2,700 confirmed cases have declined to less than 200 identified as being active, with approximately a dozen patients in hospital. As of June 15, 168 people in B.C. have died with COVID-19.

But the numbers show a far more severe situation south of the border in Washington state, which is has approximately two million more residents than B.C.’s population of five million. Over 1,200 people in Washington have died with COVID-19 out of the state’s case count of over 25,000 – nearly ten times the infection rate tracked in B.C.

“That’s very concerning when you see that kind of number,” said Robert Dennis Sr., Chief Councillor for the Huu-ay-aht First Nations, adding that public demonstrations against police targeting might end up increasing the spread of COVID-19 in the USA. “Because of the nation-wide protests in the states and where a lot of those protests have no social distancing, I think this could lead to another spike.”

There have been no new cases on Vancouver Island since May 7, and for weeks any of the island’s infections have been declared over through recovery or death. But based on discussions between First Nations and Parks Canada, the popular West Coast Trail will remain closed for the time being, said Dennis.

The Pachena Bay campground is also closed, although the chief councillor said there is a possibility it could reopen in July, depending on infection rates and the risk of COVID-19 spreading from other areas. The campground is normally accessed though the Huu-ay-aht village of Anacla, but this might change if the site reopens this summer.

“There are some things that we’re considering in the even that we do reopen,” said Dennis. “We might look at separate access to the campground and blocking off the whole campground to the village.”

During past summers the area has been a destination for fishers from the United States.

“We get a lot of fishermen that come here, but not a lot that come for the campground,” said Dennis.

Travel across the Alberta border has not been restricted, bringing an additional concern of cases returning to Vancouver Island. With a population of 4.3 million, Alberta has fewer residents that B.C., but twice as many active cases of COVID-19 with over 400. Alberta has tracked over 7,300 infections over the course of the pandemic, but more than 317,000 tests have also been performed to detect cases, nearly double the testing performed in B.C. over this year.

“There continues to be no effective treatment, and the virus will continue in our communities for months to come,” she advised during a media address on June 15. 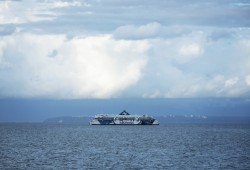 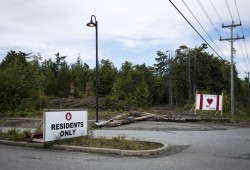