Gina Amos, a harm reduction outreach worker with Teechuktl Mental Health, and Kim Erickson, acting coordinator of the Quu’asa program, stand outside of Teechuktl’s new location in Port Alberni. Offices at 4841 Redford Street are open to the public by appointment, and staff can be reached at 250-724-3939.

Today the First Nations Health Authority released data showing that the number of fatal overdoses in the province has nearly doubled over the first four months of 2020 compared to the same period in 2019. This translates into 89 deaths due to drug overdoses for First Nations people (not including Metis or Inuit) from January to May 2020 – a sharp increase from the 46 fatalities recorded over the same period last year, resulting in a deadly overdose rate 5.6 times that of the rest of B.C.’s population.

After the opioid crisis was declared a provincial public health emergency in April 2016 the number of fatal overdoses continued to rise.  Then last year 113 First Nations people died from overdose – showing a 44 per cent drop from the peak in 2018. But this progress appears to be reversing, and public health officials are blaming the COVID-19 pandemic.

“We know that the toxicity of the street supply has gone up exponentially in this pandemic,” said Dr. Bonnie Henry, B.C.’s provincial health officer, during an FNHA press conference.

While the majority of those who died this year had Fentanyl in their system, cocaine was found in half of the victims, methamphetamines were detected in 34 per cent and 30 per cent had consumed alcohol, noted Chief Coroner Lisa Lapointe.

“This is a mixed drug issue,” she said. “It’s driven by Fentanyl, but certainly involves many drugs that people use.”

The recent overdose numbers affecting First Nations people follows an announcement last month showing that B.C.’s fatal overdose count has reached record levels during the pandemic, with 170 deaths in May. Officials have pointed to how closed borders have shut off conventional routes for illegal drugs, leading B.C. dealers to cut in more poisonous content.

“Most of the drugs are cut with different things, right from rat poisoning to many different under-the-kitchen-sink stuff. It’s very little drug actually in it,” said Gina Amos, a harm reduction outreach worker with Teechuktl Mental Health in Port Alberni. “It’s all cut with a bunch of different things, so they’re actually not getting the drug they think they’re getting.”

Amos finds that many are seeking hard drugs to treat pain after doctor’s prescriptions have been cut off, with little opportunity to get further medical treatment.

Over the last five and a half years 6,094 people in B.C. have died from an illicit drug overdose – yet no fatalities have been reported at the province’s busiest supervised safe injection sites. For some, access to this critical service has been constricted by the pandemic’s social distancing measures, with some overdose prevention sites being closed or turned mobile to prevent the gathering of crowds.

“There are fewer sources available for supervised consumption, and without having somebody with you with Naloxone or the ability to phone for help, people are dying before they are reached,” she said.

Chief Coroner Lapointe noted that the continued shame associated with drug use isn’t helping. In April 2019 Dr. Henry recommended the decriminalization of narcotic possession to encourage those using to seek adequate support, but this was rejected by B.C. Solicitor General Mike Farnworth due it being under federal jurisdiction.

“There’s far too much judgement around this issue,” said Lapointe. “At the Coroners Service we encourage all levels of government to adopt a comprehensive, evidence-based, non-stigmatizing approach to this epidemic. Judgement doesn’t help and certainly the illicit, illegal factor is very, very challenging when we’re asking people to seek support and to feel free to go to health-care facilities when there’s a fear of being arrested or losing a child or losing a job.”

As the province’s active cases hover around 160 early this summer, British Columbia is being held up as an example for the rest of North America in how a region can effectively control the spread of COVID-19. But provincial directives to stay home and physically distance from others are clearly taking a toll on the mental health of many Nuu-chah-nulth-aht.

“We just seem to be getting call after call after call of suicide ideation, suicide attempts,” said Teechuktl Manager Vina Robinson. “If people are homeless and they were lonely and scared before, it’s totally enhanced now through the pandemic.”

“I’m hearing from residential school survivors where they can’t go out or are being told what to do, so a lot of triggers happening,” she said. “They can’t see their children.”

Amos stressed that Teechuktl’s support comes without judgement as their team encourages clients to use safely.

“Never use alone, always be with somebody, and always take those safety precautions while they’re choosing to do what they’re doing,” she said of messaging to clients. “One day that’s when we really do hope that they reach out to us to stop or to find something different to help to manage what they are trying to manage.”

“Pray or go to the water, go to some cedar branches,” she said. “We all let them know that Creator is there, Nass is there.” 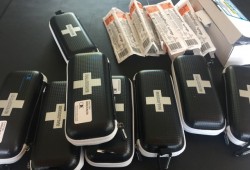