Thanks in part to federal and provincial funding, Huu-ay-aht First Nations will be able to build a new cultural centre and multi-purpose field.

It was announced on July 3 that the Nuu-chah-nulth First Nation was one of the 22 Vancouver Island project recipients to receive funding through the Investing in Canada Infrastructure Plan.

The federal government is collectively contributing slightly more $33.2 million for the projects while the B.C. government is chipping in with about $8.7 million. Funding recipients are also required to put up some of their own money.

Huu-ay-aht is one of eight funding recipients for projects in Indigenous communities. Huu-ay-aht’s contribution for its cultural centre and fields is about $200,000. The entire project is costing about $2 million.

Huu-ay-aht Councillor Charlie Clappis, who is in charge of the First Nation’s housing and infrastructure portfolios, is hoping to commence work as soon as possible.

“We want to come out ablazing,” he said. “It was a long time waiting for this.”

Clappis said a grant application had been submitted back in January of 2019. Applicants, however, had been told that final decisions might not be determined until the spring of 2020.

“We knew we had been shortlisted last fall,” Clappis said.

With its funding, Huu-ay-aht will be able to construct a new culture centre, which will include a language training room, kitchen, dedicated areas for the production and sale of arts and crafts, multi-purpose rooms and washrooms. The two-floor, 4,000-square foot facility, will be built next to the First Nation’s administration building and the House of Huu-ay-aht.

Clappis said the new facility and its rooms will be suitable to stage various smaller meetings.

“The hall we have now is quite huge and doesn’t host small groups very well,” Clappis said of the House of Huu-ay-aht, which opened in 2000.

With grant funding, Huu-ay-aht will also be able to build a new field, with a soccer pitch and ball diamond. Some bleachers will also be added to the field.

Clappis is glad community members will be able to benefit from the use of a new centre and sporting fields.

“As we grow and invest in our upper village, we need to grow our recreational facilities,” he said.

The new field will also include an outdoor presentation stage, which can be the centre of various cultural events.

Cultural treasures that were returned in 2016 are currently in a small display room at the First Nation’s administration building.

Clappis said having dedicated space in the new cultural centre to showcase the items will allow the First Nation to retrieve additional pieces.

“That’s huge,” he said. “Unfortunately, some of the items are just stored at the museum now until we can present them.”

Catherine McKenna, Minister of Infrastructure and Communities, is pleased the federal government is able to help out with funding.

“Investing in community centres, recreation and cultural facilities means children and youth will have a safe place to play and learn, seniors have a place to meet, our clubs and groups can have a home,” she said. “These facilities build strong, dynamic communities where people want to put down roots and do business.”

McKenna also liked the fact the B.C. government was part of the funding process.

“We are supporting projects that will create jobs and bring residents new facilities and programs that will make a real difference in people’s lives for years to come,” she said.

also praised the funding efforts of her government.

“It is more important than ever to support rural and Indigenous communities,” she said. “The projects we’re announcing (now) will help smaller communities on the Island rally now while supporting growth, helping preserve local heritage, and enhancing residents’ quality of life.”

Clappis said he finds it interesting his First Nation is achieving major accomplishments every 10 years. For starters, the House of Huu-ay-aht was built in 2000. Then Huu-ay-aht’s administration offices opened in 2010. And now 10 years later construction will commence on the culture centre/fields. 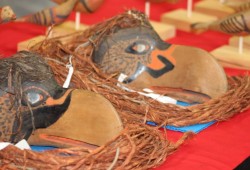 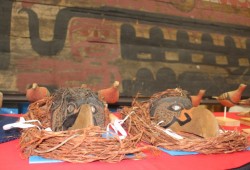