That’s the thinking of Jennifer Woodland, the CEO of the Nuu-chah-nulth Seafood Limited Partnership (NSLP).

Back in 2019, Woodland’s company had applied for a provincial grant through the Rural Dividend Fund. The NSLP was seeking funds for a project it dubbed Analysis of Capacity of West Coast Vancouver Island Coastal Communities to Deliver Large-Scale Ocean Farming of Seaweed.

Woodland said the grant proposal was written as NSLP entered into a partnership agreement last year with Cascadia Seaweed, which aspires to be the largest supplier of ocean farmed seaweed in the country. Thus, Woodland said it was necessary to determine Vancouver Island’s capacity in this regard, especially figuring out how much First Nations communities could contribute to the venture.

But NSLP and other grant applicants received some bad news last fall.

“(Provincial officials) suspended that fund because they decided to support mill and forestry workers,” Woodland said.

Woodland, however, received a recent surprise call. She was told her company’s application from a year ago would provide economic opportunity following the pandemic and that it was approved under a new one-time rural community grant. B.C. officials announced they would be providing almost $14 million in funding to support economic development and recreational opportunities in rural communities throughout the province.

“We were thrilled to receive the funding as it will identify the capacity, needs and business opportunities to meet the growth goals,” Woodland said.

The NSLP/Cascadia partnership is already cultivating seaweed for the growing demand of the product.

“We have two kelp farms in the water now and we’re developing three more,” Woodland said. “And they’re talking to several others about more farms.”

Grant recipients were selected from three categories. They were First Nations, municipalities and not-for-profit organizations. Besides NLSP, others with Nuu-chah-nulth connections that were selected were the Bamfield Huu-ay-aht Community Forest Society (BHCFS), Hupacasath First Nation and Tseshaht First Nation.

The BHCFS received $32,450 to support the planning, initial layout of trails and the construction of trails within the Bamfield Huu-ay-aht Community Forest.

And Tseshaht First Nation received $100,000 to continue its examinations of how to best utilize private land it has acquired.

Woodland said NSLP entered into a partnership with Cascadia Seaweed as it had identified kelp aquaculture as a booming business opportunity that could help a number of First Nations.

“Kelp is one of those amazing products that you don’t realize you use it every day,” she said. “It’s in pharmaceuticals, cosmetics and even pet food.”

Work on the NSLP analytical project has already begun. An individual, Mairi Edgar, was hired about a month ago to help facilitate the process.

“It’s a lot of intense efforts and a lot of community meetings,” Woodland said, adding project officials are developing lists of the contributions various communities can make.

Woodland said both NSLP and Cascadia Seaweed officials are keen to hear from those on Vancouver Island’s west coast on their community’s abilities to provide any capacity for the venture.

Woodland can be contacted via email Jennifer.Woodland@ncnseafood.com while Edgar is available at medgar@cascadiaseaweed.com

Woodland said the various community meetings will be extremely beneficial.

“This will really dig into the specific capabilities of each First Nation,” she said. “This information is not listed anywhere yet. We’re going to have this huge library of information.”

Through its various community meetings, NSLP officials are hoping to better understand the available workforce, skill sets and infrastructure, including boats and small boat decks that First Nations can provide.

Other information the NSLP is seeking is the warehousing and cold storage capacity of various communities and in some cases the processing facilities they have available.

NSLP officials are also hoping to get a better understanding of transportation availability, including road access, port and harbour infrastructures and airport capabilities.

Woodland added information that is obtained will also be useful to the NSPL for another reason. Data collected will help company officials make decisions on other business ventures including commercial fishing and other forms of aquaculture. 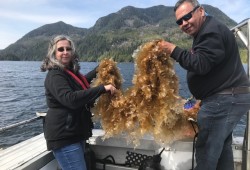