James Martin repositions his brother's boat so that he can paint its sides more easily, in Ucluelet, on July 15. (Melissa Renwick photos)

Errol Sam grew up on a commercial fishing boat learning how to sling fish from his father. Since the age of 8, he’s been steady at it and decades later showing no sign of stopping.

“Who doesn’t fall in love with fighting fish as a living?” asked Sam, who is from Ahousaht First Nation. “That’s what I did.”

With the opening of the multi-species finfish fishery on July 15, the T’aaq-wiihak fleet repaired and polished their commercial fishing vessels in preparation of heading out to sea.

“You want to be proud of the boat that you work on,” said James Martin, as he gave the Constellation a fresh coat of paint in the Ucluelet harbour.

Sam has seen “big” changes in the industry since he first started. He remembers when fisheries used to be open for six-months of the year – from April 15 to October 15. It was a time when west coast allocation numbers used to be 360,000 chinook salmon and 2.1 million coho salmon, he recalled.

Those numbers have been dramatically reduced.

“It speaks to the decline of salmon,” said Candace Picco, T’aaq-wiihak Biologist.

This year, the chinook salmon allocation for the T’aaq-wiihak fishery is 7,724 pieces of chinook, she said.

In 2009, the BC Supreme Court recognized the Indigenous rights of five Nuu-chah-nulth Nations – Ahousaht, Ehattesaht/Chinehkint, Hesquiaht, Tla-o-qui-aht and Mowachaht/Muchalaht – to catch and sell species traditionally harvested within their territories.

Negotiations between T’aaq-wiihak and the federal government are ongoing as a percentage of fish was never allocated to the fishery and has yet to be determined.

The salmon allocation policy was established in 1999. It set out a series of principles for allocating salmon in British Columbia among the three harvest groups – First Nations food, social and ceremonial; commercial; and recreational.

The policy is currently under review to provide priority to the right-based fishery of the five Nuu-chah-nulth nations.

“I don't imagine it’s going to come out any time soon,” said Picco. “We still see either equal treatment or less priority shown to the five nations than the recreational fishery.”

In 2019, the recreational fishery off the west coast of Vancouver Island (WCVI) was allotted 50,000 chinook salmon, whereas the T’aaq-wiihak fishery was assigned 7,039, according to the DFO.

This year, the T’aaq-wiihak fishery opened on July 15, the same day as the recreation fishery off the west coast of Vancouver Island.

“They used to lump us in with [the] commercial [fishery] and now they upped the priority one notch and lumped us in with the recreational [fishery],” said Picco.

Although Sam’s cousin, Charles Webster, retired from fishing around 20 years ago to raise his two grandsons, he continues to help family members repair their boats.

As Sam fiberglassed the roof of the boat he’s been fishing on for the past 27 years, Webster replaced the rotting stern.

“Lots of thinking goes into how to put this stuff back together,” said Webster. “You got to stay one step ahead. It’s not easy, I tell you.”

As the T’aaq-wiihak fisheries continues to urge the federal government to fulfill the Supreme Court’s decision on their fishing rights, Sam marched on.

Taking advantage of the stretch of good weather, he checked off the remaining projects to get his boat, April Wine, ready to drive up the coast.

“I’ve been doing this my whole life,” he said. “It’s what I’ve always known.” 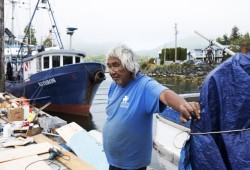 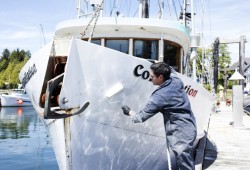 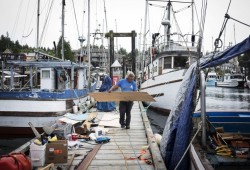