Living off the sky, the land and the ocean

Jeffery Ignace has lived in Hesquiaht his whole life. "I'm proud to be Hesquiaht," said the 37-year-old. "I love it here. Just look at my view. Not a lot of people have a view like that," on Wednesday, June 24. (Melissa Renwick photos)

When Dianne Ignace awoke on a calm summer morning, she was gripping her late-husband’s pillow as the sun peaked through the cracks in her blinds.

Three days had passed since Father’s Day. It was the first in 45 years that she hadn’t celebrated with Dave, whom she had loved all those years.

The reminder re-opened the wound of his sudden passing in early-December. Yet, Dianne continued to tell stories of her husband as if he was sitting next to her – quietly facing their living room window that looked out towards the Hesquiat Harbour.

The couple has become legendary on the coast for being the last remaining family to live in Usk tua, the traditional winter village of the Hesquiaht.

As a tenth generation Hesquiaht, Dave was the caretaker of the land – a title that has been passed down to his son, Jeffery, who has never lived anywhere else.

They have kept their family’s history alive by continuing to live off the land, using traditional knowledge passed down through the centuries.

But as Jeffery prepares to celebrate his 38th birthday next month, he struggles to find a partner who is willing to unplug from society and move to the remote peninsula.

“It’s not exactly for everybody,” he said. “Most people are so set in their town life that they find it difficult to live out here. I’ll find a girl some day that wants to move out here with me.”

Growing up at the mouth of the Hesquiat Harbour was like “one big playground,” said Jeffery.

He has fond memories of spending hours with his father on the water, where Jeffery would listen to Dave recount “a million different stories about fishing.”

Jeffery said that his father wasn’t always a patient teacher but when it came to driving a boat and fishing, he was careful with his teachings – it was his passion and livelihood.

“He was quite in depth,” said Jeffery. “He taught me where the reefs were, which channels you could take that were deep enough to pass through and how to ride certain waves in certain weather conditions.”

Through all of the years that they spent on the boat together, Dave became one of Jeffery’s best friends in the “whole world.”

When his father passed, Jeffery had difficulty processing the loss. But with time, he has come to peace with it.

“He kind of went out the way he wanted to – with family,” said Jeffery. “We were here right until the very end with him.”

The 37-year-old often reflects on his parent’s marriage, citing how so few of his friend’s parents stayed together. Theirs was an unlikely love story, but it was built to last.

After completing a diploma in food services technology at the Saskatchewan Institute of Applied Science and Technology, Dianne hopped in a stock car with a herd of her friends and headed west. The then 21-year-old eventually wound up in Vancouver, where she saw a job posting for the Maquinna Hotel in Tofino. While the position as a chef wasn’t everything it was promised to be, it led her to the remote, coastal town for the first time.

It was the summer of 1974 and Dave had just finished a day’s work as a deckhand. The 28-year-old was socializing on the steps of the old Maquinna Hotel when Dianne ran up, waving her first employment insurance check in the air. Despite not being much of a drinker, she wanted to celebrate. It was her ticket to the warmer pastures of the Okanagan Valley, where she was soon-to-be headed.

Dave jumped at the invitation.

They passed a few hours by inside the hotel pub before heading to Chesterman Beach, where Dave cooked a salmon over an open fire under a starry night sky.

For the following week, he convinced the boat crew to drive back to Tofino every night so that he could go find Dianne.

“We ate a lot of salmon that summer,” she said.

Dianne only made it as far as Campbell River and from there, the pair took turns hitchhiking back-and-forth to spend time together. Occasionally, they would meet in the middle and sleep on grassy hills after attending open-air rock concerts by Buffy Sainte-Marie or Scrubbaloe Caine in Port Alberni.

“Port Alberni was hot for concerts in the ‘70s,” she said.

Dave lived in a denim jacket, with a four-strand leather braid tied around his head. His long, black hair brushed his collarbones and dimples pierced both his cheeks.

“He was kind of a hippy guy,” she said. “I was pretty straight-laced compared to him, but we sure got along good.”

Lessons from the prairies

Dianne was a prairie girl who grew up in the small Saskatchewan town of Meota. Her parents were raised by Mennonites and both came from large, tight-knit families.

In the ‘60s, her grandfather, Henry P. Peters, received a Century Family Farm Award from the Saskatchewan Ministry of Agriculture. It is given to those who have continuously maintained the same farm in Saskatchewan for 100 years or more.

Dianne spent a lot of her childhood on his farm and grew up learning how to grow a garden from her mom and bake pies from her aunt.

She didn’t know it at the time, but it was her training grounds for the life she would come to live in Hesquiat.

After a summer of dating, Dave brought Dianne to visit his homelands for the first time.

Up until the early 1900s, the Hesquiaht First Nation criss-crossed the peninsula with the flow of changing seasons for thousands of years. Some would travel to Homis during halibut season, where they’d teach their young to go fur seal hunting. Others would deliver fresh fish from their canoes to the women who had set up camp at Chik nuu, or Smokehouse Bay, where they would spend weeks processing and smoking fish.

It was also a change of atmosphere for the Hesquiaht and gave Usk-tua time to heal.

“When you [create] a human footprint, you need to let things come back to life,” said Dianne.

The village of Hesquiat went through a massive transformation in the 1940s when most of the young men left. They relocated to Hot Springs Cove where they could safely anchor their troller fishing boats.

Wicked winter storms often left men stranded in the Hesquiat Harbour for nights on end. Back on dry land, they would occasionally awake to find their boats shredded to tiny pieces because they were smashed to shore by angry waves.

At that time, most of the children were taken away to the Christie Indian Residential School on Meares Island – Dave was among them. He spent a lifetime working through the trauma inflicted by the school, where his brother, Joseph, was beaten to death at the age of 10.

Through all of this, the elders were left behind, along with Dave’s parents, who cared for them.

“The elders never left,” said Dianne. “They died off.”

Without any children to care for or pass their teachings down to, “some of them died from broken hearts,” she said.

Dave would return home from residential school during the summer and help his parents take care of the Hesquiaht elders.

“When Dave was growing up he was [often] in a house full of grandmas and grandpas listening to all of their Indian stories,” said Dianne. “He could understand the language, so he knew what they were talking about.”

Those formative experiences allowed Dave to develop a deep connection to his culture and to the land, which he shared with Dianne.

Before long, Dave’s father, Hypolite George, was the only one still living on the peninsula year-round.

In his older age, Hypolite traveled for months at a time, roving from daughter-to-daughter, before getting homesick and returning to Hesquiat.

He was away visiting one of his daughters when Dianne stepped foot onto Hesquiat for the first time in February 1975.

“The place looked deserted,” she said.

The generator wasn’t working, the water was off, the telephone couldn’t dial out and there was no firewood to heat the house.

Dave got everything back up-and-running in no time, leaving Dianne “right impressed.”

For dinner, he took her out to the end of the reserve where he shot a duck and then led her to the sandbar, where they dug up clams.

“I went everywhere with him,” she said. “Didn't matter what he was doing.”

After ten days deserted on the peninsula together, Dave proposed.

Interracial marriages were still widely unpopular in the 70s and the couple struggled to find a preacher that would condone their matrimony.

Unfazed, they marched on and held a small ceremony on Chesterman Beach in the summer of 1975, where Dianne donned a white dress with rose tinted glasses.

After a brief honeymoon in Meota, they began their life together in Hesquiat.

“I’ve never lived anywhere else since,” said Dianne, who has spent two-thirds of her life on the peninsula.

“I’m as much in love with the place as I am with Dave,” she said. “I still love that bugger.”

The rattle of the elderberries

They raised four children together. The two youngest, Jeffery and Korianne, never left.

“It’s always been home,” said Jeffery. “I’m proud to be Hesquiaht. I love it here. Just look at my view – not a lot of people have a view like that.”

Dianne often contemplates what will become of Hesquiat Harbour when she’s gone.

“Jeff is the last of the tribe,” she said.

While the future of the original Hesquiat winter village remains unknown, Dianne, Jeffery and Korianne continue to care for it, just like their family always has.

They clean the peninsula’s shorelines of debris that gets washed to the 13-foot-high-tide line. In the fall, they open up their coho salmon bearing river, so the fry can travel through the murky water out to sea.

Dianne has kept a daily journal since the ‘70s. She logs everything from phone calls with family members to when the lawn was mowed last. The 67-year-old has come to know the place so intimately that she can tell when a westerly wind is blowing by the rattle of the elderberries behind her house.

When Dave passed, many people expected Dianne to leave the peninsula, but even in his death he binds her to the land.

“I want to be buried right next to Dave,” she said. “I’m not going anywhere.” 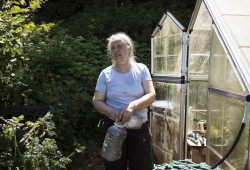 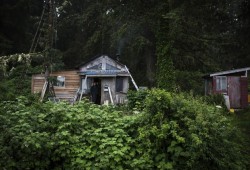 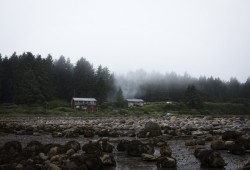 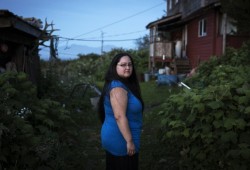 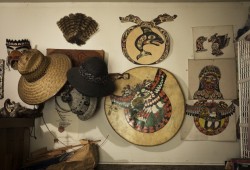 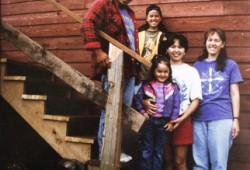