Watching over the dead as Kyuquot’s cemetery caretaker

Frank Short sits outside his smokehouse in Kyuquot, to keep an eye on the fire, on August 13. (Melissa Renwick photos)

While attending school on Aktis Island as a young boy, Frank Short’s teachers would strap him across the hand with a wooden yardstick. He tolerated the pain until Grade 7, when he decided to drop out.

To this day, the 65-year-old is reminded of his early childhood by the throbbing pain in his right hand. It’s a permanent scar that aches every day.

Although Short wasn’t taught through the school system, he was educated by the elders within his community on Aktis Island, which served as the Ka:'yu:'k't'h'/Che:k'tles7et'h' First Nation’s main village. His grandfather, Sam, was among them.

Short is a man of few words. He never cared to sing or dance, but would closely observe his grandfather, who carved canoes and prepared the dead for burial.

At the time, Sam was Kyuquot’s cemetery caretaker who watched over Mission Island, where the First Nation continues to lay their dead to rest in Kyuquot Sound.

When a community member passed, Short recalled his grandfather wrapping their body in sheets. Sam would help to coat the bottom of the family’s canoe with cedar and brush the boat to cleanse it before the casket was placed inside.

He never saw the bodies being transported.

“We were told to stay in until the mourning was over,” said Short.

When the time came for Sam to pass down his role as caretaker, Short stepped in.

“My dad used to say I picked up from where he left off,” he said.

In his earlier life, Short struggled with a drinking problem.

“I tried to pay back the community by doing that gravesite work,” he said. “I was not a nice person when I was an alcoholic, so I decided to give back.”

Since the early ‘80s, Short has been working as the Ka:'yu:'k'h'/Che:k'tles7et'h' First Nations’ cemetery caretaker. He maintains Mission Island by clearing brush from the gravesites and helps to map out the burial grounds by consulting with family members on where they’d like their loved ones placed. With four or five other men, he is responsible for digging the graves, which fall six feet deep into the earth.

While most shy away from death, Short has looked it in the eye for nearly 40 years. He has even become comfortable with it.

“It helps me with my strength in myself,” he said.

Prior to the arrival of the Catholic Church, Kyuquot had a burial site on Dead Man’s Island, where bodies were placed inside a cave. When the church moved in, the ritual became taboo, as it wasn’t a traditional Christian ceremony. Shortly after, the nation’s burial grounds were moved to Mission Island.

Signs of white settlement are imprinted on the island with gravestones that date back to the early 1800s.

Up until just over two years ago, the Catholic Church maintained ownership of the island. Upon this discovery, Bishop Gary Gordon of the Diocese of Victoria, made moves and finalized the return of the island to the Ka:'yu:'k'h'/Che:k'tles7et'h' First Nations over the Easter long-weekend in 2018.

“As long as it belonged to the church there was no vested interest to develop it and we weren’t allowed to because it was private property,” said Daniel Blackstone, Ka:'yu:'k'h'/Che:k'tles7et'h' First Nations family support network coordinator.

Alongside a carpentry crew that is currently in training in Houpsitas, the Nation’s youth warriors have plans to build a caretaker cabin on the island.

“It’s to provide a place for the warriors to do their activities,” said Blackstone. “But it’s going to be a shared resource with people so they have a stockpile of tools to work on the gravesite, because right now we have to haul everything over there if somebody passes.”

To access the burial grounds, Short has to anchor his boat out in the water and climb over rocky terrain before reaching the beach on Mission Island.

“Regardless of the weather, when somebody needs to be put away, that’s what he does,” said Blackstone.

Along with the cabin, Blackstone dreams of building a gazebo so that when there’s a congregation, community members will have a dry place to stand during the service.

But as the winter storms become more erratic, the larger tides are causing Mission Island’s shorelines to recede. Short worries that are running out of room.

When someone passed, Short remembers his grandmother telling him, “there are reasons – you don’t question the reason.”

Despite those words, there was nothing that could have prepared him for the pain of digging his own parent’s graves.

Short’s mother, Sarah, was ailing from stomach cancer. While traveling home from Campbell River on an icy road four year ago she was fatally injured in a car crash. The sting of her absence continues to mark Short like an open wound.

Although it is impossible to turn back time, signals from his ancestors allow Short to stay connected to the departed.

When it came time to bury his mother on Mission Island, Short looked across the water to Aktis. As her body was carried from the boat to her gravesite, five wolves emerged from the forest on the west end of the island, where their family home used to stand.

The pack of wolves strolled down to water’s edge and waited. When the burial was over, they were gone.

“The wolves came to pick her up,” said Short. “Welcoming her into their world.”

His father was put to rest one year later after losing his battle with cancer.

“The night before he left, I went to see him,” said Short. “To thank him for everything he’s taught me – especially fishing. And when I dream of him, he asks me to go fishing. I dream of him lots. Especially when I’m doing something that I need to question.”

Now, when Short visits his mother’s favourite beach on Mission Island, he finds two eagles sitting in the sand facing each other – talking.

It brings him comfort knowing that his parents are just a boat ride away.

As Short begins to transition out of his role as cemetery caretaker, he has been passing down his teachings to his nephew, Matthew Jack. They approach death in the same way.

“It’s the circle of life,” said Jack. “Everything continues on.” 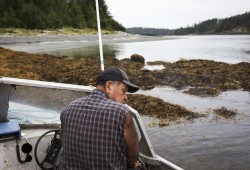 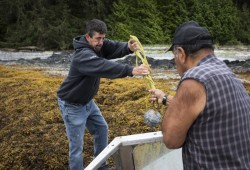 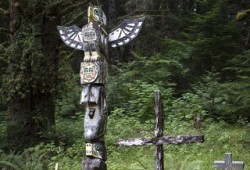 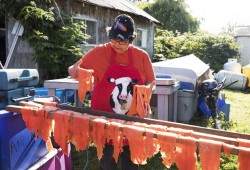 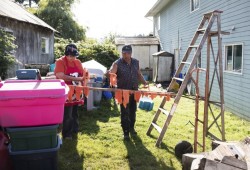 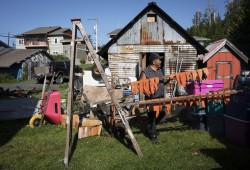