Construction for the new ʔapsčiik t̓ašii continues in front of Long Beach, within the Pacific Rim National Park Reserve, near Tofino, on August 25, 2020. (Melissa Renwick photos)

Construction of “ʔapsčiik t̓ašii, the multi-use pathway that will extend between Tofino and Ucluelet, remains on target to be completed in March 2022.

The $51.1 million infrastructure project is aimed at allowing Canadians to connect with nature, while also supporting economic opportunities within the region.

“Pacific Rim National Park Reserve is seen as the place that connects people and communities in the region,” said Parks Canada. “ʔapsčiik t̓ašii is the result of a long-time vision shared by local residents’ communities, including First Nations communities, as well as visitors.”

After welcoming the return of visitors to Vancouver Island’s west coast during Phase 3 of B.C.’s restart plan, Tofino has been struggling to deal with the unexpected volumes of tourists and the onslaught of trash they are leaving behind.

“When you open up trails, there’s tourists that will leave garbage everywhere,” said Terry Dorward, Tla-o-qui-aht Tribal Parks project coordinator. “[Are] there going to be opportunities there for our people to ensure that this place doesn't become a disastrous area, with more and more tourists [and] illegal camping? That’s what we’re seeing right now.”

Although Tla-o-qui-aht leadership, Hereditary Chiefs and elected council support the trail for its economic opportunities, there are some ongoing issues that have yet to be worked out, said Dorward.

Based on the Rocky Mountain Legacy Trail in Banff National Park, Parks Canada predicts that an average of 500 visitors will use the “ʔapsčiik t̓ašii daily.

“There’s a lot of money flowing,” said Dorward. “A lot of opportunities as Tla-o-qui-aht that seem to be passing us by.”

Parks Canada said that before work began on the ʔapsčiik t̓ašii, they worked with Tla-o-qui-aht and Yuułuʔiłʔatḥ First Nations to identify short and long-term economic benefits.

This included support conducting a “traditional use study and identifying traditional ecological knowledge in relation to the proposed route so their interests are recognized and accommodated,” said Parks Canada.

In their ongoing discussions, Dorward hopes that Parks Canada will support a larger guardian program so that long-term environmental monitoring of the area can continue after the pathway’s completion.

By working collaboratively with Tla-o-qui-aht and Yuułuʔiłʔatḥ First Nations, Parks Canada is aiming to create economic opportunities within the communities.

Job fairs were hosted within Ty-Histanis and Hitacu on June 5, 2019 and January 21, 2020, where interested community members met with the contractor and Parks Canada to discuss employment opportunities, said Parks Canada.

As the project marches on, conversations between the Nations, Parks Canada and Hazelwood Construction Ltd will persist.

“Parks Canada is committed to ensuring that all infrastructure projects are cost-efficient,” said Parks Canada. “While respecting the mandate to protect the ecological integrity and cultural heritage of protected places.” 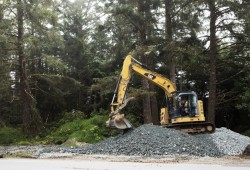