Bamfield road to be paved

After countless motor vehicle accidents and many lives lost, the 90 kilometre logging road that leads to Bamfield will finally be paved.

Fraser stated in his comments that that the announcement comes after years of pressure from the people of Huu-ay-aht, Bamfield and other interest groups who came together to move the project forward.

In September 2019 a coach bus carrying University of Victoria students heading to the Bamfield Marine Sciences Centre left the road, careening down a steep embankment. Many were injured and two people died in the accident.

Peters himself said that he lost his grandfather, Huu-ay-aht Tyee Ha’wilth Art Peters, in an accident on the Bamfield road many years ago.

Fraser said that safety improvements on the gravel logging road is an important issue for B.C. Premier John Horgan and he has always supported the project.

“We are pleased to announce this vital safety project to the people of Anacla and Bamfield,” said Fraser, referring to a road that’s claimed the lives of eight Huu-ay-aht members and the two UVic students.

“This road is a life line to the people of Huu-ay-aht and to other interest groups,” said Fraser.

The road will be re-engineered and chip-sealed (paved) over the course of two to three years. The improvements come with a price tag of $30.7 million; $25.7 to come from the provincial government and $5 million from Huu-ay-aht First Nations, plus in-kind donations such as gravel and other construction materials.

The improvements, Fraser said, will make the road easier, shorter and more safe.

Chief Dennis said that Premier Horgan came to Bamfield in November 2019, traveling over the rough road and experiencing it first-hand.

“When I heard him say ‘let’s form a working group,’ that’s when I knew he was committed to fixing the problem,” Dennis said.

“By working in a respectful way with Huu-ay-aht to make upgrades to Bamfield Road a reality, we see that the Province is ready to work on true reconciliation with First Nations and is honouring the importance of the safety of our community,” he continued. “This is about two cultures coming together to work on something,” He noted that in the last few weeks an HFN member, blinded by road dust, slammed into the back of a logging truck. Fortunately, both drivers were okay.

Hereditary Chief ==+iis^in said this was a big step for everyone involved. The road improvements, he said, will benefit not only his people but also local business and industry, which, in turn, benefits all British Columbians in the form of a healthy economy.

Plans are in the works for a celebration of this announcement and project but dates cannot be set until the COVID-19 pandemic is no longer a threat.

Provincial contribution to this project comes from the COVID-19 Re-start and Recovery program. It is not known when exactly the work will begin, but Minister Fraser said it will be very soon.

Huu-ay-aht would like to acknowledge its partners that worked together on the project: the province of British Columbia, the City of Port Alberni, Alberni Clayoquot Regional District, Western Forest Products, Mosaic Forest Management, Urban Systems, University of Victoria, Bamfield Marine Science Centre and the many residents and business owners who showed their support for the project. 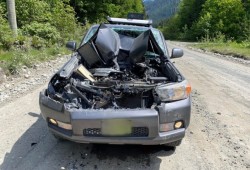