Hilda Hansen, pictured with her daughter Therese, died on Sept. 10 in Kyuquot at the age of 98. The Ka:'yu:'k't'h'/Che:k'tles7et'h' member grew up on Aktis Island before the settlement was relocated to the village of Houpsitas (Denise Titian photo)

Hilda Hanson, Nuu-chah-nulth’s eldest elder and most treasured Kyuquot grandmother passed away peacefully at her home in Houpsitas on Thursday, September 10th. According to daughter Therese, Hilda was ’98 and three quarters.

“I don’t think mom wanted to make it to 100, but she would sometimes tell people she was more than 100,” Therese said with a chuckle.

Hilda was born Dec. 5, 1921 to Constant Harry (Nuukmiss) of Kyuquot and Frances Martin (Kwaakwatyiik) of Nuchahtlaht.

According to Therese, Hilda was born into royalty with seats handed down on both sides of her family, but, she noted that some of these traditions were not honoured.

“As a child, she grew up in a family rich with teachings and she exhibited these teachings all her life,” said Therese. “Our mother was haahuupcu – well taught, a proper woman, proud, and respectful. Mom held that regally and decently, never boasting, brought up with dignity.”

Hilda worked hard throughout her life from the fish canneries at Ceepeecee to the kitchen cooking meals for the children of both the old and new Christie Indian Residential Schools. Taking a job at the residential school allowed her to be close to her younger children who were attending there.

When the family returned to their Kyuquot home, their entire village was being relocated from Aktis Island to Houpsitas. Kyuquot would have its first formal school beginning 1974 when a double-wide trailer was brought in to serve as the community facility.

Hilda Hanson became the first SD84 trustee from Kyuquot and helped to grow the school to cover all grades so that the children of the community wouldn’t have to leave home for school anymore.

“Education was very important to her,” said Therese, noting that some of Hila’s children, grandchildren and great grandchildren have gone on to earn university degrees and college diplomas.

“Our mother beamed at these successes and had been supportive along the way,” said Therese.

Hilda’s husband Mike was a fisherman and so her sons followed in their father’s footsteps. Tragedy struck in the early 1980’s when Mike and his youngest son Kenneth died in an accident while out fishing.

Strong and proud, the grieving mother moved forward in life with the support of her family. Over the years she took in orphaned children and fostered others.

“She ran the receiving home, a place, a home for children,” said Therese, noting that not all children taken in were Quu?as, some were mamalthn’a (Caucasian). “Our mom had a big heart to care for others and still be called mom by her other children.”

Hilda was known for the little store that she ran out of her home for more than 60 years. Therese believed that as Hilda got older, the hard labour of packing inventory from the dock up her stairs and to the shelves kept her in shape and busy. Many times, children would meet the weekly freight boat to help pack Hilda’s groceries up to her house and she would thank them with pop, chips and candy.

In the summer Hilda would tend her garden, which she dug and prepped herself, growing raspberries so that she could make jam for her family.

Hilda was well known all over the west coast and loved to go to elder’s conferences. She looked forward to seeing her dear friend Susan Ginger.

In the past few years, with her health declining, Hilda stayed in Tsawaayuus (Rainbow Gardens’ Senior’s Home) in Port Alberni. While there, she would sometimes attend language classes, guiding students in the proper pronunciation of Nuu-chah-nulth words and phrases.

When more family moved back home to Kyuquot, Hilda was able to return home to be cared for by her loved ones. It was there that she quietly slipped away on Sept. 10.

Nuu-chah-nulth leadership were saddened by the news of her passing.

“It is with a sad heart that I hear of the passing of late Hilda Hanson,” wrote NTC Vice-President Mariah Charleson. “I remember going to Kyuquot as a child and going to her store often. She was always so kind and gentle. I know the community of Kyuquot and the entire nation of Nuu-chah-nulth will miss her dearly. I send my deepest and sincerest condolences to the family of late Hilda as well as the Nation and community of Kyuquot.”

"Hilda Hansen was a strong, cultured Nuu-chah-nulth woman who knew our language, protocols and stories,” said NTC President Kekinusuqs, Judith Sayers.  “She would come to tribal council meetings and gatherings and share her knowledge with the delegates. She was kind and knowing and attended many feasts throughout Nuu-chah-nulth territories. It is with sadness that we let her go and know that she takes so much knowledge, history, family relationships and stories.  I am sure her family and community and of all Nuu-chah-nulth will remember her legacy and the knowledge she left with us." 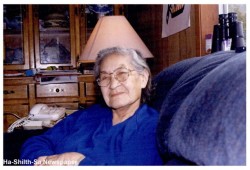 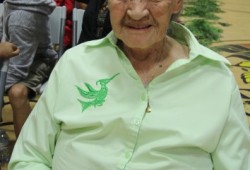 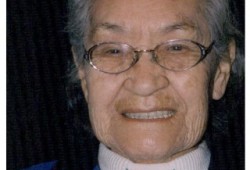