Terri Williams sits with husband Ray as loved ones gave a rare visit to Yuquot on Aug. 14. (Natasha Amos photos)

It’s been a very different summer in Yuquot. The ancestral home of the Mowachaht/Muchalaht normally serves as a popular summertime destination for members of the First Nation, as well as travellers from around the world hungry for adventure on the rugged coast of Nootka Island.

But the COVID-19 pandemic has stringently restricted travel to the remote settlement off the northwest coast of Vancouver Island, limiting visits to only Mowachaht/Muchalaht members. With just one household and lighthouse keepers on the southern edge of the island, access to medical care is only possible by float plane or a boat ride through Nootka Sound to Gold River – a situation that makes Yuquot as vulnerable to coronavirus infection as any other First Nations settlement on the coast.

But this hasn’t helped Terri Williams, who has lived her whole life on Nootka Island, and for almost 60 years has shared her time in the ancient settlement with husband Ray. To be closer to services and industry, the First Nation relocated its members to a reserve to near Gold River in the 1960s, but Terri and Ray stayed in the place that would always be home.

Terri’s connection to Yuquot is documented in the 1994 film The Washing of Tears, in which she serves as a prominent voice for the Mowachaht people. Terri appears early in the film on Yuquot’s pebble-covered beach with her granddaughter Simba, looking upon the incoming waves.

“It makes me think of my ancestors, especially if I’m here by myself and I just come on this side and listen to the breakers and waves,” she reflected in the film. “You can practically hear them talking, just the way they used to talk when I used to see them.”

Terri recalled her father’s time as a whaler, when he would paddle for four days at time to hunt for his community. In the film she spoke of the last whale being brought to Yuquot’s shore in 1948 or ’49.

“When they got a whale, they would bring it to the beach and all the men would cut it up,” she said.

It’s difficult for the 75-year-old to speak these days; the words come out in a whisper. She underwent cancer surgery seven years ago, resulting in part of her lungs being removed. Ray has noticed her strength declining in recent months.

“It’s an effort for her to answer to us when we talk to her,” he said. “She can only get around on her wheelchair in the house here.”

Concern spread to other family members who live elsewhere, including Margaret Amos. Before the community was moved to Gold River, Amos spent the first 13 years of her life in Yuquot, recalling over 300 residents in 22 houses.

“Auntie Terri has been going through a lot of health issues and her spirits were really low,” observed Amos. “She didn’t have strength of any kind and family decided we needed to help lift her.”

And so, a group of approximately 20 family members came to the remote village on Aug. 14 to offer a rare gathering during these trying times. The loved ones drummed and sang, offering a blessing and lunch for both Ray and Terri.

Since that visit Terri’s spirits have lifted.

“She’s actually doing a little better,” noted Amos. “She was really sick, she wouldn’t even get out of bed and walk. A lot of it I think was depression and not around people, not knowing that people really care.”

“It was very touching for us,” said Ray. “It tells us that somebody cares out there, somebody thought of that and wanted to do that for my family.”

“We all care about each other - no matter how bad things get, you still care when they need you,” added Amos. “Growing up I remember old people used to always do that. They used to always gather when there’s sickness in the family. They would always bring food, they would sit around and tell stories.”

As time passes on, Terri’s legacy on Nootka Island is becoming an increasingly valuable link to a distant time. She grew up in a settlement by Nootka Cannery, a few kilometres east from Yuquot on the island’s coast. A fish processing operation was first established there in 1897, and after the Nootka Packing Company purchased the sight in 1917 the cannery became a bustling hub for fishing boats offloading sardines, razor clams and herring. Accounts from the famous Canadian artist Emily Carr observed settlements for First Nations, Chinese, Japanese and Europeans around an operation that ran 24 hours a day.

Terri is the last of 20 children in the Dick family, who traversed a network of walking trails to relocate to their other home at Bajo Point, a site west of Yuquot that carries the Nuu-chah-nulth name of “E-as,” said Ray. Now some of these walking trails that First Nations used for thousands of years are crossed each summer by hundreds of hikers who venture to the island to explore the Nootka Trail.

Unlike many other Nuu-chah-nulth people from her generation, Terri has spoken her ancestral dialect all of her life, thanks to not being exposed to the assimilationism of residential school.

“Her late grandmother had hidden her in the bushes when Indian Affairs were collecting children to go to Christie school,” said Ray.

Over their life the couple had seven children, two of whom still survive.

“We lost four boys and one daughter. If they were all alive today they would be in their mid-40s,” said Ray. “They’re all buried here in Yuquot.”

But the 79-year-old reflects that the bond between him and Terri grew stronger after the age of 40. Ray credits her for fortifying his connection to the words of his ancestors by clarifying dialects. Ray comes from a Mowachaht father and a Huu-ay-aht mother from the Nookemis family.

“For many years I spoke two dialects, two different languages as I was growing up,” said Ray. “Hearing both languages stuck in my brain over the years.”

“My dear wife, one day she told me, ‘Ray, you know what? You’re speaking two languages and you don’t realise it. You’re speaking Mowachaht and Huu-ay-aht at the same time’,” he continued. “I didn’t know that, but now I’ve broken it up and separated it, and I speak Mowachaht now.” 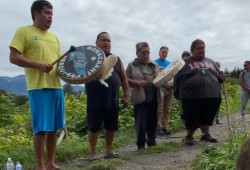 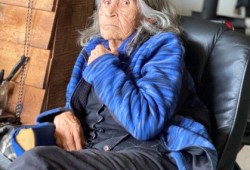