Tsimka Martin rallies boaters and kayakers together in the Tofino harbour to protest against the fish farms, on Sept, 26, 2020. (Melissa Renwick photos)

Under dark, stormy skies, dozens of boaters and kayakers gathered in the Tofino Inlet this past Saturday for a wild salmon flotilla in protest of the surrounding fish farms.

Tsimka Martin organized the event in response to the 19th recommendation of the 2012 Cohen Commission’s report. The recommendation calls for the prohibition of the Discovery Islands fish farms by Sept. 30, 2020, unless the operations are proven to pose only a "minimum risk of serious harm to the heath of migrating Fraser River salmon."

Frustrated by government-inaction, Martin was moved to give a voice to wild salmon and to stand in solidarity with her “east coast relatives.”

“It seems like the Department of Fisheries and Oceans Canada (DFO) is only listening to industry,” she said. “It does not seem like the government is going to act on those recommendations.”

In a press release, DFO said that it has completed nine peer-reviewed, scientific risk assessments to determine the impact of interactions between wild Pacific salmon and pathogens from salmon farms to inform their response to Cohen Commission’s recommendation.

“The results of these assessments concluded that the transfer of these pathogens pose a minimal risk to abundance and diversity of migrating Fraser River sockeye salmon in the area,” read the release.

This year saw the lowest Fraser River sockeye salmon return on record, according to the Pacific Salmon Commission.

Federal Fisheries Minister Bernadette Jordan said that the government is committed to an area-based management approach to aquaculture.

“We recognize the concerns raised by partners that these particular farms may not be the best fit for this location nor for the adjacent communities,” she said in the release. “We will be consulting with each First Nation within the Discovery Islands area, and the information and views they provide will inform my decision on whether or not to renew licences for these farms this December, and in the future.”

By offering a space for community members to voice their concerns, Martin hopes that collectively, people will continue to fight for the species in peril.

“As a member of Tla-o-qui-aht and as a member of Nuu-chah-nulth, I feel that it’s really important for our cultural longevity,” she said. “[Salmon are] integral to the health of the ecosystems, which our lives are bound to.” 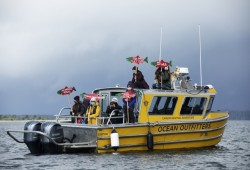 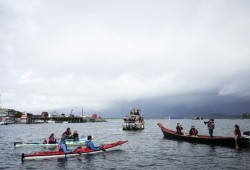 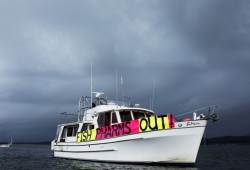