Somass Hall demolished after over 70 years in Tseshaht community

The Somass Hall hosted cutural events for generations. The hall was demolished on Sept. 30, after standing on the Tseshaht Reserve since the end of the Second World War. (Ha-Shilth-Sa archives photo)

The hall that once was considered the heart of the Tseshaht community came down on Sept. 30, after standing on the First Nation’s reserve for over 70 years.

The Somass Hall was demolished within four hours, leaving an empty site where generations of Tseshaht people recall a building that once served as the hub for community gatherings.

The hall was built by Bloedel, Stewart and Welch at the end of the Second World War, recalled Tseshaht elder Cody Gus in information distributed by the First Nation.

“They were using the old railroad tracks that ran alongside the Somass River on our land, so they built the hall for us,” he said of the forestry company. “The road is there now.”

The building had not been used for several years, after it was deemed unsafe due to moisture affecting the structure, but for many years the Somass Hall hosted a variety of events, including weddings, parties, lahal games, treaty meetings, fisheries discussions and potlatches. Artwork stretched down the walls from the hall’s florescent-lit ceiling, including the Thunderbird Man painting by Master Touchie from the Yuułuʔiłʔatḥ First Nation.

“It’s where I found my calling to be a singer,” said Robert Scott Watts in a Tseshaht publication on the hall. “When I first started to attend the community dancing spirit practices there was just tons of people that came on a regular basis, average of 40 if not more every week. Some of my fondest memories were in that hall, where I first ever hinkiits danced, where I learned to dance the Thomas Transformer dance.”

“Dancing Spirits used the hall for almost all their dance practices and functions,” recollected Jessica Sault. “Many people would come up every Wednesday to sing and dance. Our culture was revived at the Somass Hall and is still strong today.”

This cultural revival included the giving of Nuu-chah-nulth names, a practice that Annie Watts witnessed for her children.

“All three of our kids graduated at that hall, Haahuupayak School held their graduations there,” she said. “This is where they proudly received their Indian names.”

Some remember two canoes stored under the hall, including Peggy Tatoosh, who played in the vessels while adults were engaged in lahal gambling.

“We used to play in the canoes, especially Miss Alberni, that were stored under the hall,” she said. “When there was lahal, we as kids would challenge each other to see who was brave enough to flip the lights off and someone would grab some of the cash.”

“My great grandfather, Sam Campbell, carved them,” said Jessica Sault of the canoes. “They were called Miss Somass and Miss Alberni and he gave them to his grandsons, James and Willard Gallic.” 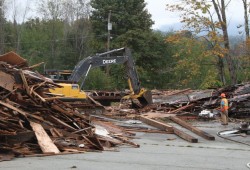 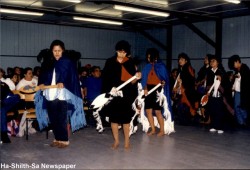 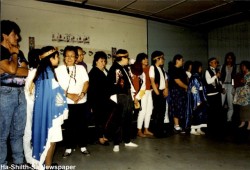