A rapid-testing machine has been installed at the NTC office in Tofino, and is expected to be able to confirm COVID-19 cases over the next month.

Jeannette Watts, manager of the Nuu-chah-nulth Tribal Council’s nursing program, said nurses are currently being trained to operate the GeneXpert in Tofino, one of three recently provided to different parts of province by the First Nations Health Authority. The machine tests nasopharyngeal swabs taken from a person’s nasal cavity.

“You can do four tests in 50 minutes,” said Watts. “When you take the swab, within seven hours you should run it, or if it’s on ice or in the fridge it can last up to seven days.”

The GeneXpert was installed in Tofino to serve Vancouver Island’s west coast First Nation communities. Some of these settlements are hours away from medical facilities, a remoteness that puts them at a vulnerable risk in the event of a COVID-19 outbreak, according to many Nuu-chah-nulth leaders.

Watts said that the machine is part of her nursing team’s plan to handle any outbreaks in these remote communities. Once a positive case is confirmed by the GeneXpert, the Island Health communicable disease hub in Nanaimo would be notified, which then would involve NTC nurses to trace anyone who could have been exposed.

“If it identifies a positive case, then there’s immediate contact tracing that begins, and then there’s the establishment of trying to contain the disease,” said Watts. “All our NTC nurses are trained to do the collection of the swabs.”

She added that the NTC nurses can move among Nuu-chah-nulth communities to fight the spread of the virus.

“Because Nuu-chah-nulth has a collective nursing program - meaning all the nurses are employed by Nuu-chah-nulth - we have the ability to move them around as need be,” said Watts.

But under the guidelines of the B.C. Ministry of Health, not everyone can be tested for the virus. One must present symptoms of COVID-19, such as a fever, tiredness, the loss of smell and taste or a cough, for a swab to be collected.

“Routine testing of those who are asymptomatic would significantly impact laboratory testing costs,” states information published by the B.C. Centre for Disease Control, “as well as health system costs such as staffing of testing centres and laboratories, and PPE requirements for staff collecting samples.”

Following FNHA funding guidelines, the Tofino GeneXpert machine will be used specifically for Indigenous people. Other samples will be sent another COVID-19 testing machine, which is often in Victoria. Another GeneXpert machine is at the Port McNeill hospital, which has been operational sine late June.

In British Columbia the number of active COVID-19 cases dropped to a low of 152 on June 30, but over the summer months increased to over 2,000 by mid September. As of Oct. 6 there were 1,384 active cases, with 244 deaths since the virus was first detected in the province in January. 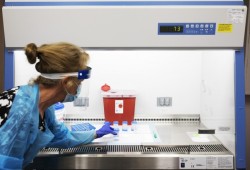 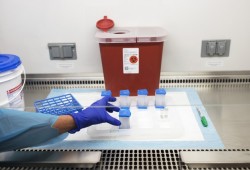 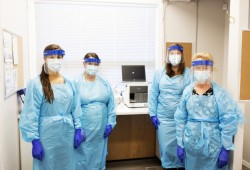