A log processor and other forestry equipment were seen being transported up the Clanninick Forest Service Road near Kyuquot on Oct. 20, causing alarm from the First Nation that the activity could harm utilities under and over the road, putting the community of Houpsitas’ water system at risk. (Submitted photos)

A forestry company’s need to haul timber out of areas harvested earlier this year has raised concern with the Ka:'yu:'k't'h'/Che:k'tles7et'h' First Nations, who fear that logging trucks on a utility road could put a remote community’s water system at risk.

Correspondence between the First Nation and Interfor show an urgency for the forestry company to move wood down the Clanninick Forest Service Road to meet monthly barging commitments for the timber to be sent overseas. The old-growth cedar was harvested in March and messages from Interfor show a need to move the wood before it gets eaten by pests.

Located on Crown land within Ka:'yu:'k't'h'/Che:k'tles7et'h' territory, Interfor holds a permit to use the road, but the First Nation has a utility right of way on the Clanninick. Over the road run power lines supplying electricity to pump water from wells, and underneath lies a six-inch pipe supplying water to the remote community of Houpsitas.

At four metres wide - or less in some spots - with power poles close to the soft shoulders, the First Nation believes that in its current state the Clanninck cannot support the trucks Interfor would be using to transport the timber.

“The use of off-highway trucks loaded with timber and large forestry equipment puts KCFN’s water system at risk,” said Ka:'yu:'k't'h'/Che:k'tles7et'h' Chief Administrative Officer Cynthia Blackstone in an email to Ha-Shilth-Sa. “The powerlines that potentially can be impacted by the equipment supply power to KCFN’s water system.”

Through a partnership between Indigenous and North Affairs Canada and the Ka:'yu:'k't'h'/Che:k'tles7et'h' First Nations, the Clanninick was built in the late 1990s for access to the northwestern Vancouver Island First Nation’s water system. Sam Roger, the First Nation’s manager of capital assets, said that the road was never built to handle off-highway logging trucks, as provincial regulations require power poles to be three metres off an FSR’s shoulder.

“It’s tight getting an off-highway truck past them,” he said of the First Nation’s power poles. “If they go out, they lose water.”

In its early years plans to upgrade the road for logging trucks weren’t fulfilled.

“At that time, Interfor and the ministry had based their approval of the utility on the road being haulable,” said Roger. “That never happened.”

In 2019 a deal was being developed between the First Nation and Interfor to finally improve a winding two-kilometre section of the road, but this has yet to happen. The First Nation estimates this to cost $675,000.

“The agreement, still under negotiation, contemplates an arrangement with Interfor covering the cost of this upgrade,” said the forestry company in an email.

“Conversations with Interfor have shown mutual agreement and concern for the preservation of the utility overhead and under the FSR,” said Blackstone. “Activities on the ground provided a different message.”

Alarm was raised on Oct. 20, when a log processor and other equipment were seen being taken up the road. Roger noted that this goes against a WorksafeBC requirement for the owner of a power system to provide approval in writing if “limits of approach are not to be maintained” by large vehicles.

Interfor responded by ceasing to haul on the road to reassess how the timber can be accessed on the Clanninick, calling the movement of equipment “a breakdown in communication.”

“Interfor took responsibility and immediate action to correct the operational breakdown, including significant changes to personnel,” said the company. “Interfor has ceased use of this road for the time being to allow for further discussions and to ensure full alignment going forward on the upgrade of the road and future movement of equipment.”

Blackstone sees a lack of oversight into forestry operations in Ka:'yu:'k't'h'/Che:k'tles7et'h' territory, and said the nation is working to build more capacity for monitoring and stewardship of the land. During a local state of emergency due to the regular loss of electricity in Houpsitas, the transport of timber by helicopter interfered with the community’s power lines earlier this year.

“On March 20, 2020 a branch fell from a log being hauled over the line and caused a power outage during a time when we were facing powerline challenges,” said Blackstone.

Although this logging activity could pose a risk to the remote community’s utilities, forestry remains an important industry for the First Nation. FCFN Forestry LP generates revenue from logging and works with Interfor.

“One the key ways of strengthening our voice and participating in the forest activities in our area is to form partnerships with forest companies,” said Blackstone. “On a more immediate level, we will work to ensure the safety of our community is protected and this means Interfor will need to be prepared to work with KCFN.”

Ralph Friedrich, Interfor’s general manager, gave an assurance that this will happen.

“We have a strong working history in the traditional territory and look forward to continuing our efforts to further our meaningful relationship with KCFNs,” he stated. “This means conducting ourselves with integrity and ‘walking the talk’ in everything we do, every day – which includes the shared use of the Clanninick main line and all our operations in the territory.” 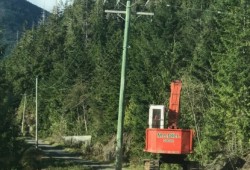