When Ahousaht began debt reduction measures nearly a decade ago, one of the largest contributors to the financial burden, Ahousaht’s sea bus, was sold, to the dismay of many residents.

Although it was expensive to run, the Ahousaht sea bus still delivered consistent scheduled runs at affordable rates for residents and visitors. It also served as the exclusive emergency vessel. For $900 billed to the medical department, patients were transported to the nearest hospital in Tofino, night or day. Its size made it both safe in rough seas and capable of carrying a large number of passengers to and from the isolated Flores Island village that about 1,000 people call home.

But the service could not survive. The large boat was expensive to run and maintain, and along with crew members salaries the band-owned business was swimming in more and more debt every year. Many times, the large vessel left the dock with few or no passengers at all.

The beloved boat was sold nearly ten years ago. Prior to its sale, it had exclusive access to emergency patients needing transport to Tofino General Hospital. That, says water taxi operator Tom Paul, is where the trouble started for struggling private water taxi owners.

Patient travel is the money maker

Paul says that people are stuck in the days when the sea bus ran, and fares that it charged haven’t changed much despite the skyrocketing costs of fuel and maintenance services that a vessel needs.

When the sea bus was running, a regular adult fare was $20. Small children rode for free while school-aged kids and seniors paid $10 each. But if a person is traveling for medical reasons, they get a patient travel voucher from Ahousaht’s medical department worth $45 per person. And those are the money-makers, said Paul.

Even more lucrative for a water taxi business are the after-hour emergency boat trips, which net the owner $300 for a one-way trip – double that if the patient returns home on the same boat that day.

Now that the sea bus has been sold, more members are running private water taxi businesses and they can transport emergency and patient travellers. But a series of factors is making it difficult to serve people in the way they enjoyed ten years ago.

Kaileigh Taylor is a young Ahousaht woman who lived in the village with her parents all her life. She works in the kitchen of a popular Tofino restaurant. The commute by water taxi was not only expensive but also unreliable in terms of scheduling.

“I was supposed to start at 8:30 a.m. but boats do not always run on schedule, so my boss was flexible (with hours),” said Taylor.

She paid $40 a day to commute back and forth to work and sometimes waited up to three hours on the unsheltered dock in Tofino for a water taxi.

“It took a lot of my paycheque and sometimes I’d have to borrow money from my parents to get to work,” said Taylor.

Sometimes, she had to pay an expensive split charter to get on a boat.

“I’d even offer to stand outside in the weather to get on a boat,” she said.

Taylor says boats won’t run unless they have more than seven paying passengers. While this makes business sense, it leaves a lot of people, elders included, stranded and unsheltered in the weather as they wait on the dock.

Tom Paul and his wife Marsha invested in a 25-foot aluminum boat, launching their six-passenger water taxi business last September to supplement their incomes. They named their boat Miss Mary after their youngest daughter.

They paid $70,000 for the boat and spent $35,000 in upgrades, including a new engine, safety gear, a radar and insurance. It costs $500 to fuel up his boat, which, he says, will get him seven return trips between Ahousaht and Tofino.

“It costs $1,000 just to pull your boat out of the water for scheduled maintenance,” said Paul.

Water taxi owners faced additional expenses when COVID-19 pandemic safety regulations were put in place. They were required to step up sanitization protocols and install partitions between the seats. In addition, limits were placed on the number of passengers that could be transported and fewer people were traveling during the worst of the pandemic.

Even then, the fare for scheduled water taxi runs remained the same.

It was around the start of the pandemic that boat operators moved away from scheduled water taxi runs to mainly offer charters. Two years ago a boat charter averaged $150 but now it’s $200 and up to $250 for a one-way trip on the bigger boats. On April 1, a member of Ahousaht posted on social media that a boat charter had cost them $275.

This makes things difficult for those that can’t afford a boat charter – people that have low income, seniors and single people.

June Titian has an adult son and five school-age children. Taking a scheduled boat on the weekend for her entire family, if she could get one, would cost $90 one way. But there are few boats that make scheduled runs and if they do, there usually isn’t room for the entire family.

A single, working mother, Titian prefers to charter a boat at the cost of $200 to $250 one way, both for keeping her family and groceries together and also to get to her destination in a timely manner. Her weekend family trips on the water taxi alone costs $400 to $500. She says it’s too hard to scramble for regular fare boats when so many people are traveling at the same time.

“I used to do scheduled morning trips but I don’t anymore, it’s just not worth it,” says Paul.

He recalled a time he left the dock and was called back by other boat operators.

“They said there’s passengers waiting to go home, but when I got there, they were mostly half-fares, all the others were taken by the other boats,” said Paul.

But that is the nature of the business, said Paul, and he took the passengers home, saying he wants to provide a safe service for the people.

“It can be a very lucrative business, but it is also cutthroat,” said Paul, adding that everyone is trying to survive. “You can go to the main dock in Tofino any Saturday and see all the people lined up on the dock waiting for water taxis.”

With fuel prices climbing to astronomical highs, Paul says boat operators have to be judicious about when to run their boats. At the same time, they need to hustle to get the most lucrative fares.

Few people know that BC Ferries has, for years, been subsidizing water taxi transport in Ahousaht. B.C.’s Ministry of Transportation and Infrastructure supports, through a service fee, a number of contracted routes under the Coastal Ferry Services Contract, according to Deborah Marshall of British Columbia Ferry Services.

BC Ferries, in turn, administers contracts for the ministry on these unregulated routes, including a water taxi in Ahousaht. Ahous Business Corporation Ltd. receives the BC Ferries subsidy but, due to confidentiality rules, they could not disclose the amount. However, they did say that Ahous Business Corporation is expected to provide more than 200 trips per year on a regularly scheduled basis between Ahousaht and Tofino.

The Ahous Hakoom, owned and operated by Ahousaht’s hereditary chiefs through their umbrella business organization, the Maaqtusiis Hahoolthee Stewardship Society (MHSS), is subsidized by BC Ferries and is required to deliver regular, affordable passenger service to Ahousaht. According to MHSS, that translates to four days per month of subsidized water taxi service. But, MHSS said the boat goes beyond their contract obligations, running several more trips over the week.

While MHSS did not respond to requests for information, an employee recently posted an updated schedule on social media. At this time of the year the Ahous Hakoom makes at least three daily scheduled runs to and from Ahousaht. The boat will leave Ahousaht at 9 a.m., 2 p.m. and 4 p.m. It leaves Tofino for Ahousaht at 10 a.m., 1 p.m., 3 p.m. and 5 p.m.

It appears, with the weather warming up and pandemic safety measured eased, the Ahous Hakoom has increased regularly scheduled passenger service to and from Ahousaht, bringing relief to many residents.

Kaileigh Taylor has been offered staff accommodation from her employer. She pays $600 a month for her room in Tofino, far less than she paid in monthly water taxi fares.

“I prefer it this way,” said Taylor.

She said she is grateful to the water taxi operators that never turned her away.

“People like Chris Frank, he will take you if he has room,” she said.

Still, she worries for the people who must wait on the dock.

“Even a bench, a cover of some sort so people don’t have to stand in the freezing rain,” Taylor suggested. 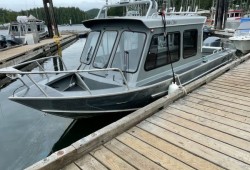 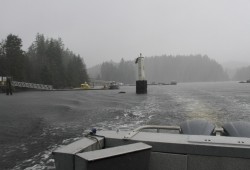