Hot Springs Cove residents sit together at the community’s school after participating in the Tsunami Walk on March 30. (Submitted photo)

Members of the Hesquiaht First Nation are a little less fretful these days.

That’s because officials from their community have taken some recent measures to better prepare for any possible disasters.

Back in 1964 the Hesquiaht community of Hot Springs Cove was virtually destroyed after an Alaskan earthquake, which measured 9.2 on the Richter scale. That earthquake created a tsunami and when it reached British Columbia’s west coast. It wiped out almost all homes in the Hot Springs Cove community.

Luckily, no Hesquiaht lives were lost that day.

Fast forward to today, and Hesquiaht members are now much better equipped to handle any similar disasters. Thanks to a grant from Indigenous Services Canada, Hesquiaht recently installed a siren in its community that is able to alert members of any possible dangers.

“They researched different types of sirens,” said Casey Larochelle, an emergency planning co-ordinator with the Nuu-chah-nulth Tribal Council. “They were really debating a siren or a mobile system. It made more sense to have a siren up a pole.”

A funding request for the siren, which cost slightly more than $100,000, was sent to Indigenous Services Canada in 2020.

The pandemic, however, significantly delayed the shipment of the siren and the ensuing installment. But Hesquiaht members have now had the siren in their community for several months. And they are fully aware of what to do in case of an emergency.

Community members participated in a recent drill, which was called the Tsunami Walk.

“They leave their homes and they walk to the school,” said Bernard Charleson, Hesquiaht’s emergency operations centre director, explaining the local school is on higher ground than homes in the community.

About 60 people (which is the majority of those who live in the community) took part in the Tsunami Walk.

A question and answer session at the school about the First Nation’s emergency preparedness followed.

“We had trucks for elders with mobility issues,” Charleson added. “And they had an option to stay at home, but it was monitored.”

Students from the local school also participated in the Tsunami Walk, which was held on a Tuesday morning.

Charleson is Hesquiaht’s main point of contact if there are any signs of possible danger to the community.

In fact, Charleson is basically on call 24-7. He has a console set up in his home which can trigger the siren and he can be reached by provincial authorities who would warn him if there is a need, for whatever reason, to take precautions.

“There are still restrictions on it,” Charleson said of Hesquiaht’s siren. “You can’t just activate it.”

Charleson said there has long been a need for a better warning system in place for the community. He said previous leadership never acted upon improving the system, perhaps because of a lack of information that it had.

The new siren, however, is a vast improvement from the way things were handled in the past when a boat would go around at night urging local residents to get to safety.

But now, if need be, the siren once activated can be heard throughout the community and beyond.

“People around us know something is happening,” Charleson said.

Larochelle said Hesquiaht has also been taking other measures to improve its emergency preparedness in the community. For example, there are about a dozen fireboxes in Hot Springs Cove, which need to be upgraded.

“We’re hoping to replace all the items,” Larochelle said.

Other improved measures for Hesquiaht include the construction of a helipad next to the school to airlift community members requiring hospitalization. With the local helipad, those who require medical help can be flown to a hospital in Victoria, Nanaimo or Courtenay.

“With the weather here it can be quite treacherous going around by open sea,” Charleson said, adding the ability to fly those who need assistance is much more desirable. 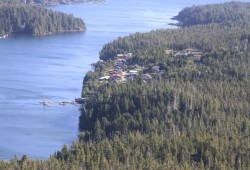